For many of us the highlight of the AHS annual conference every year is the awards ceremony at the Friday evening banquet. The Society annually recognizes outstanding contributions by individuals and organizations that further the study and understanding of Alaska history. This year in Seward, Mike Hawfield, chair of the AHS Awards Committee, presented the following awards. 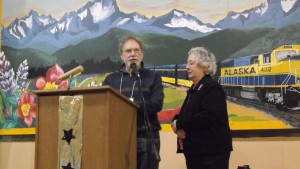 The Evangeline Atwood Award is given to an individual for significant long-term contributions to Alaska history. The award is named for a founder of the Alaska Historical Society who wrote, supported, and advocated for Alaska history from the 1940s into the 1990s. This year’s award is given to Marie Darlin of Juneau for her work saving, celebrating and advocating for Alaska history broadly and for Juneau history specifically. Marie was born in Juneau and stayed. She and her husband owned Triangle Cleaners, and she later worked in human resource management with the federal and state governments. She has volunteered for numerous community and civic organizations, and fortunately local and state historical societies and museums, are prominent among them. Marie is active in every organization she supports. Currently she volunteers for the Juneau-Douglas City Museum leading walking tours of historic places in downtown Juneau, and at the front desk of the museum answer questions. She is a member of the Juneau Historic Preservation Commission and program chair for the Gastineau Channel Historical Society. And she advocated, tirelessly and continuously for ten years for the funding to build the new State Libraries Archives and Museums building set to open in 2016. As a member of the Pioneers of Alaska, Marie co-edited its three-volume Gastineau Channel Memories, and its predecessor, Gold Rush Pioneers of the Juneau-Douglas Area, about the town’s pioneer families. For the Alaska Historical Society, Marie has helped organize the Local Historical Society group and served on the Board of Directors. It is most appropriate that the Alaska Historical Society recognizes Marie Darlin with an award and a big thank you. 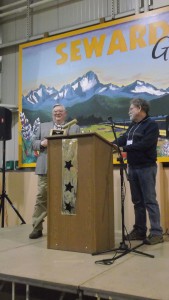 The Elva R. Scott Local Historical Society Award recognizes a community historical society or museum for its newsletter, a publication, programs, or other significant recent accomplishment. Elva Scott was a founder of Homer’s Pratt Museum and after moving to Eagle, for over 20 years the newsletter editor, tour guide, and officer of its historical society. The recipient of the award this year has a monthly newsletter, recently opened a new museum, and has been our great host this week. Thank you and congratulations to the Resurrection Bay Historical Society. Its newsletter often includes a newspaper article from the past, it hosts events and programs for the community, and keeps accepting donations and enhancing its exhibits. Congratulations to this hardworking, productive volunteer group. 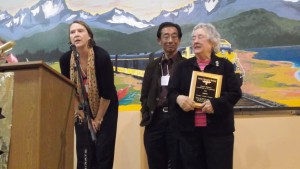 The Esther Billman Certificate of Excellence recognizes a state or local society, museum, government agency, or an organization that has completed a project contributing to the preservation and understanding of Alaskan history during the past year. Esther Billman’s efforts to preserve Alaska history and develop the Sheldon Jackson Museum are commemorated by the award now given in her name. The Empty Chair Project, that involved many individuals in Juneau, is being recognized this year. This project made the important story known of the removal and resettlement of Japanese people who lived in Juneau before and after World War II. In 1942, valedictorian John Tanaka was not at his high school graduation ceremony because he and his family had been moved to Minidoka, Idaho. The community had an empty chair on the stage that year, and this year the community had a bronze chair made and placed as a memorial at Juneau’s Capital School Park. In addition, there is a publication and a documentary film, and the Juneau-Douglas City Museum had a special exhibit.

The Barbara S. Smith Pathfinder Award recognizes contributions to the discovery and description of resources relating to Alaska history. Last year the award was named for Barbara Smith, a historian, archivist, exhibit curator, and colleague who contributed so much to Alaska history and our Society. This year’s award recipient is Richard Bland who lives in Eugene, Oregon. For more than 15 years, Richard has performed an invaluable service for the Society and for the scholarship of Russian America, a service that can remind us of the many years Barbara devoted to helping us learn more about Alaska’s Russian era. Richard has translated from Russian to English important scholarship on Russian America, making works that would not otherwise be accessible about Alaska’s past available to many. Eleven of the articles Richard has translated about Russian America have appeared in Alaska History and three of them have received the Alaska History Award. He has translated articles for other publications as well, and this last year translated one from French as well. Richard is not here tonight, but he will be sent his plaque and recognized in the next AHS newsletter. 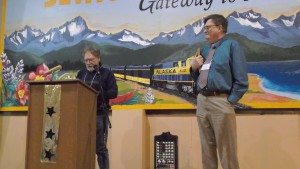 The Alaska Historical Society is awarding a Contributions to Alaska History Award to Larry Hibpshman who was the Senior Archivist at the Alaska State Archives from 1988 until his retirement earlier this year. The award specifically notes his work as project director for the Exxon Valdez records project. Larry led a team of archivists that went through thousands of boxes of state records regarding the oil spill and subsequent litigation, determining what materials were archival, organizing them, and creating a finding aid for them. It was a monumental project to end one’s career. Many in this room, however, probably have stories of Larry responding to your inquiry for something about some one, some place, or some event in Alaska history, and getting directed to a record series and often to the file with the answer. I hear Larry is going to be my neighbor, with plans to move to the Kenai Peninsula, and is interested in getting involved with our local historical societies. Welcome!

The Alaska Historical Society annually gives two Student and Beginning Professional Travel Scholarship Awards to help individuals attend and participate in the Alaska Historical Society/Museums Alaska annual meetings and conference. This year the two award recipients are Elizabeth Figus and Ulyana Korotkova, both graduate students at the University of Alaska Fairbanks. Elizabeth is a Fisheries PhD student and presented at the meeting on the halibut fishery in Southeast Alaska. Ulyana, a graduate student in the Northern Studies program and working at the Rasmuson Library, presented here on 20th century northern collections and rarities in circumpolar libraries.

The editorial advisory board members of the Society’s journal Alaska History make an award for the best article that appeared in the last volume of the journal. Morgan and Jeanne Sherwood endowed this award, and the recipient receives $500. The Alaska History Award, 2012-2013 recipient is Ross Coen for his article “Edna Ferber’s Ice Palace: Gender, Race, Statehood and the Novel as History.” The article was the initial contribution to a new section of the journal, “Revisiting a Classic” intended to provide fresh perspectives on classic works about Alaska that consider a book’s impact when it was first published and examines its relevance today. 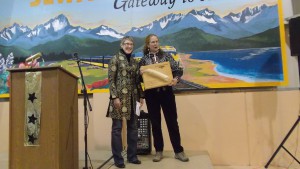