The Alaska Mining Hall of Fame Foundation (AMHF) will be inducting three new mining pioneers into their organization on November 4, 2015, at 7:00 p.m. in the Kenai-Denali Room of the Marriott Hotel in downtown Anchorage. Coffee and tea will be served during the AMHF induction and the public, including those interested in Alaska history, are urged to attend. The event is free. 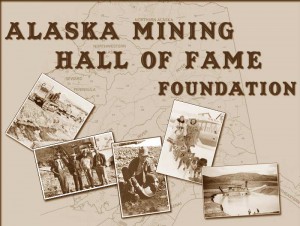 Baker and Tailleur are being honored for their role for the discovery of the Red Dog zinc-lead-silver deposit in Northwest Alaska, which, since 1989, has been one of the world’s largest producers of zinc metal and an important economic anchor for the NANA Region. Rae is a pioneer of the Hatcher Pass district of southcentral Alaska and many western states.

Born (in 1921) and raised in the wheat farming center of Windsor, Colorado, Bob Baker came north in 1946 after serving in the U.S. Marine Corps during WWII, with whom he received a Purple Heart for his service in the South Pacific. He worked as a U.S Fish and Wildlife Service enforcement agent in Fairbanks and Kotzebue during the late 1940s; at the former site, he took courses at the University of Alaska School of Mines and became interested in prospecting. His love of flying led him to fly commercially with Wien Airlines during the 1950s and eventually to establish his own air taxi–quite prophetically—the Red Dog Mine Flying Service (later Baker Aviation in 1967). The flying service was named after his beloved companion O’Malley, a reddish Terrier. When not flying around customers, Baker would take O’Malley with him on various prospecting trips.

In the early 1960s, Bob became acquainted with U.S. Geological Survey (USGS) geologist Irv Tailleur who was engaged in regional geologic mapping throughout the central and western Brooks Range. While flying logistical support for several USGS programs, Baker strongly encouraged Tailleur to sample obvious red-stained color anomalies in the Ikalukrok Creek basin in the DeLong Mountains, which he had observed over his many years of flying in the area. Tailluer did sample the exposures in 1968 and published his results in a 1970 USGS Open File report. The color anomalies were the surface exposures of the giant Red Dog zinc-lead-silver deposit.

Bob Baker was killed flying a mercy mission to Savoonga on St. Lawrence Island in March, 1968, without any knowledge of the significance of his ‘Red Dog’ find. His wife, Marjorie, was left to raise their seven children. She ran Baker Aviation, the first woman to own and operate an airline in Alaska. A model business woman, Marge ran the air taxi with her heart and cared for each and every customer she served in Arctic Alaska. She served on the Board of Directors of NANA Corporation and Kotzebue Electric Association and was for years the station manager of Alaska Airlines in Kotzebue. Marjorie Baker died in 2011. Baker’s daughter Lori Henry is currently the COO of NANA Corporation, the owner of the Red Dog mine. His son Mike Baker is the General Manager of Tuug Drilling LLC, the prime drill contractor for Teck Resources, which operates the Red Dog mine. Son Andy Baker remains involved with aviation in the Kotzebue Area, including Baker Aviation. Son John Baker is a professional sled dog musher who won the 2011 Iditarod Sled Dog race. For many years, John has been a motivational speaker for the youth of the NANA Region.

To any Alaskan geologist (such as the writer), Irv Tailleur was an outstanding regional geologist who did much to unravel the geologic framework of Northern Alaska. Growing up in Yakima, Washington, he studied earth science at Harvard, Cornell and Stanford before accepting a position with the USGS as an assistant geologist studying the Naval Petroleum Reserve #4—now the National Petroleum Reserve-Alaska. His focus was to map the northern foothills of the Brooks Range flanking the Arctic coastal plain. Eventually Tailleur’s work area was expanded to include most of the Brooks Range, where he spent more than 35 years studying the complex geologic area.

It was inevitable that Irv Tailleur and Bob Baker’s paths would cross. Irv needed fixed wing support for his studies throughout the Brooks Range. Bob could provide that for all of the western part of his study area. Tailluer landed a helicopter in 1968 at a ‘gossan’ (reddish stained area) pointed out by Baker in the Delong Mountains. Although Tailluer’s training in ore deposits was limited, he immediately recognized that ore minerals of barium, lead and zinc were present in great abundance. He published his findings in a 1970 USGS open-file report. Eventually several government agencies would visit the site and confirm the find. NANA Corporation, one of the twelve landed regional corporations created under ANCSA, selected the site as part of their land entitlement. Drilling in 1982 by Cominco for NANA confirmed the enormous size and richness of the find. Nine years later, ‘Red Dog’, named after Baker’s dog O’Malley, was placed into production as one of the world’s largest zinc mines.

Scottish-born Don Rae was a miner, prospector, assayer and mine promoter who worked throughout the West, including Arizona, Oregon, Montana, Nevada and ultimately Alaska. He was short on greatness but big on being a classical, successful, western mining man during the early 20th Century period. He would spend nearly half of his career in the Hatcher Pass district north of Palmer, Alaska. Rae was highly successful mining gold and bismuth in Montana and gold and silver in Oregon and Nevada. Wherever he went, he generally succeeded in the mining business. During 1900-1902, Rae was an assayer at the Buckhorn mine in Nevada—now one of America’s larger gold mines.

His Alaskan career began in 1903 as he left Dawson in Yukon to attend to mine developments in the Juneau and Porcupine districts of southeast Alaska. In 1908, he initiated a long term relationship with several mine owners in the Hatcher Pass district, Alaska, which only ended at his death, when he succumbed to ‘miners consumption’—otherwise known as silicosis of the lungs.