(Free and Open to the Public) 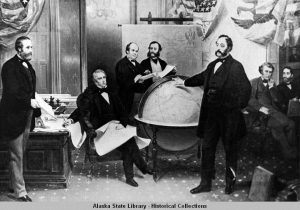 The theme of 2017-2018 Cook Inlet Historical Society lecture series is 150 Years:  Defining Moments in the Great Land. This year marks the sesquicentennial of the Treaty of Cession between Russia and the United States (1867-2017).  Over the past century and a half, Alaska has undergone remarkable change.  Its Native population has persisted and thrived; settlers have arrived from around the world; the culture and economy of the territory and then the state has transformed several times.  Throughout the fall and spring of 2017-2018, the Cook Inlet Historical Society will present lectures on some of the topics that have defined Alaska’s history since the cession.

Longtime Alaska reporter Mike Dunham has written a pair of short biographies that tell the stories of the most important diplomats in the 19th century—Tsar Alexander II of Russia and American Secretary of State William Henry Seward.  He will discuss the lives of the men who arranged the United States’ acquisition of Russian America in 1867.

UAA Distinguished Professor Emeritus Stephen Haycox will moderate a panel discussion with Russian historians about why Russian America was sold to the United States and three indigenous speakers who will examine the consequences of the 19th century Americanization of Alaska and the later Cold War.  Participants include Sergei Grinev of St. Petersburg, Russia; Ilya Vinkovetsky of Simon Fraser University of British Columbia; Andrei Znamenski of the University of Memphis, Tennessee; archivist/historian Joaqlin Estus (Tlingit); and Andrey Khalkachan, a Native of eastern Siberia.

Though the Russian-American Company (RAC) was ostensibly a trading firm, as an imperially chartered monopoly it had many non-commercial responsibilities in Russia’s North American colonies, including medical care, education, support of the Orthodox Church, and assistance to company pensioners.  With departure of the RAC following the transfer of Alaska to US ownership, any Company-supported institutions were significantly crippled or entirely swept away.  It took time before they were restored or replaced under US rule.

Wasilla was founded in 1917 when the Alaska Railroad intersected the Carle Wagon Road that headed into the Willow Creek Mining District.  Miners were supplied by merchants in Wasilla and a thriving community emerged.  Well-known members of the early community, how their history shaped Wasilla, and the activities of the centennial celebration that brought these stories and history to life will be discussed.

Speaker: JBER Command Staff
Topic: Joint Base Elmendorf-Richardson Mission and Units:  Why We Are Here

Alaska’s strategic military position is based on geography.  Alaska is an ideal hub for the great “Over-the-Pole” circle routes connecting the Orient with Europe and North America.  JBER’s location is much closer to the Orient and Europe than many parts of the contiguous United States, and provides an ideal staging for a rapid military response capability today, just as it did during World War II and the Cold War.  In this lecture, JBER Command Staff will discuss the strategic geopolitical importance of Alaska today and in the past.

Speaker:  Tim Bradner, economics and natural resources writer for Alaska professional and general-interest publications, with a specialty in energy and oil and gas
Topic: $141 billion since 1977!  Where’d all the money go?  A historical perspective of Alaska’s petroleum industry and state government

Speaker: Panelists:  TBA
Topic: ANILCA:  A discussion about how the “Alaska Lands Act” of 1980 came to be, what it contains, and how it has shaped Alaska

Following annual tradition, Audrey and Bruce Kelly will select a number of gravesites prominent residents buried at the Anchorage Memorial Park Cemetery for a fascinating historical review of our community in a different era.  Please enter the Cemetery at Bagoy Gate—7th and Cordova Streets.  There will be a printed souvenir brochure.