Interview with Sheila Nickerson, author of ‘Harnessed to the Pole’ 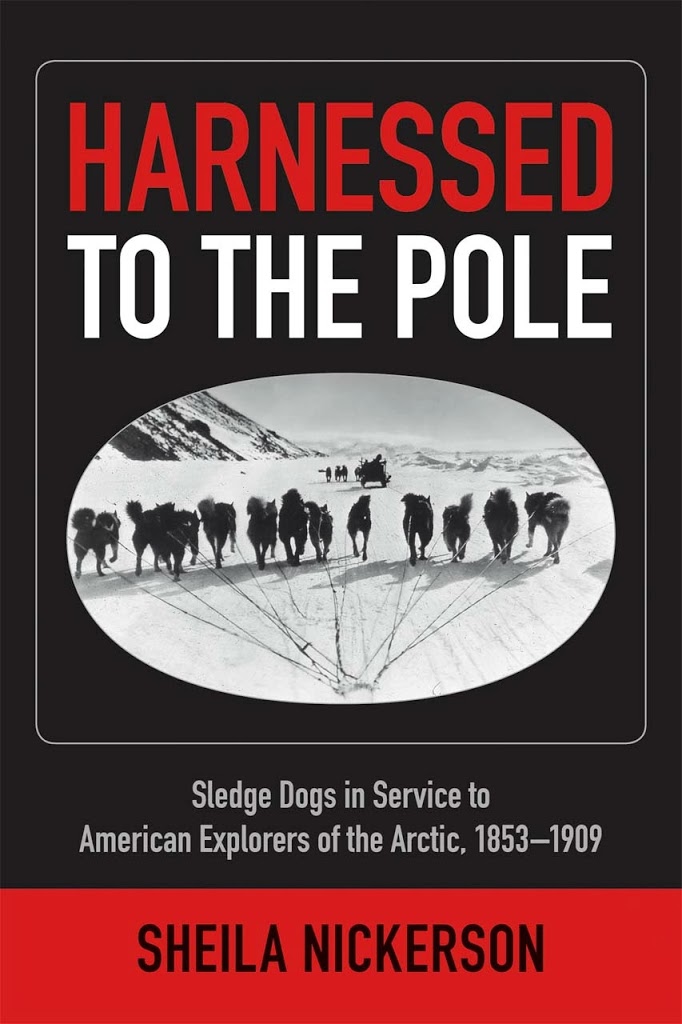 Editor’s note: This month University of Alaska Press releases Sheila Nickerson’s new book, Harnessed to the Pole: Sledge Dogs in Service to American Explorers of the Arctic, 1853-1909. The book chronicles the indispensible role played by dogs in the Arctic expeditions of such famed explorers as Elisha Kent Kane and Robert Peary. The following interview was conducted by email.
Tell us briefly about the book and how you arrived at this particular topic.
The book is a study of the sledge dogs which accompanied 19th century American explorers on their expeditions in the Arctic and eventually in their race to the North Pole.  I came to the subject after  extensive research for two earlier books dealing with the Arctic,  Disappearance:  A Map and Midnight to the North:  The Untold Story of the Inuit Woman Who Saved the Polaris Expedition.  I was particularly interested in two of the earliest explorers, Elisha Kent Kane and Charles Francis Hall.  As I studied their writings, I  became increasingly aware of allusions to dogs.  Further research confirmed that there was a storyline, though a faint one,  that portrayed the role of these valiant animals.  It had never been told  and deserved to be.   These little “camels  of the north” needed to be named and remembered and, like the Sherpas of the Himalayas, to be given their rightful place in history.  Without them  there would have been no success for Americans vying for the Pole.


Your book follows eight American explorers and their dog teams—how did you select those explorers?
I wanted to highlight the American explorers because they are less well known than polar explorers of other nationalities such as Stefansson, Amundsen, Rasmussen,  Nansen, and Shackelton.  Some of them, like Frederick Schwatka, are almost forgotten.    Also, the American explorers built upon one another’s experiences in a relatively consistent manner, forging a route to the North Pole which, over years and countless adventures, led to success.  The “American Route” is a logical sequence to follow.  The Americans, too, quickly adopted the methods of the Inuit people, early on learning the importance of dogs.  Moreover, though inconsistently,  they wrote about the dogs in such a way that they left at least a faint trail to follow.  Some  went further,  not afraid to express  emotional  ties with the animals upon which their lives depended.

Besides pulling sledges, in what ways were dogs indispensable to polar expeditions?
Dogs guarded against predators—polar bears and wolves; helped in the hunt, particularly with caribou and musk oxen;  located seals under the ice;  warned of strangers approaching;  found their way in storms;  gave alarm at the edge of the sea ice; provided warmth in emergency conditions;  and, when all hope for success in hunting was gone, provided meat; in death, they contributed skins.  Perhaps most importantly, they provided companionship and distraction from the rigors and depression  of the arctic winter.  In some cases their companionship  was the only means of fending off the horrors of the long, ice-bound  winter which could propel both man and animal into madness.

One would imagine the performance of each explorer—“success versus failure” if we want to call it that—resulted directly from how they treated their dogs. True?
The better dogs were treated, the better they performed.  But good treatment, as we judge it today, was not always possible.  At times there was simply no food to provide them and many miles to cover, often in fiercely stormy weather.  Also, diseases such as rabies and distemper could sweep through villages, killing all teams.  The most “successful” American explorer, Peary, did what he thought right for his dogs but considered them tools of his campaign to reach the Pole,  carefully calculating how many needed to be taken along for food.

Throughout the centuries of polar exploration by Europeans many expeditions failed for, among other reasons, not using dogs. Can you speak to the transition—cultural, economic, purely utilitarian, or otherwise—that led to the acceptance of employing dogs? How, when, and why did that happen?
The British, unwilling to adopt the methods of indigenous people, thought it was more proper to put men in harnesses to pull boats and sledges rather than dogs.  It was only during the search for the lost John Franklin expedition that they began to use dogs for hauling.  The few exceptions, such as Francis Leopold McClintock and John Rae, succeeded where others failed miserably, suffering starvation, scurvy, cold, and exhaustion.  Kane and Hall, the two earliest American explorers, quickly recognized the value of adopting the ways of indigenous people, including the use of dogs for transportation and hunting.  Their success with native ways established the precedent that eventually enabled the Americans to achieve the Pole.

Why do these dogs and their history matter today?

These dogs, who worked so bravely  and thanklessly for their masters,  deserve recognition.   At a time when dogs are now being recognized for military and civilian service and monuments are being established to honor them, these dogs of the 19th century Arctic need to be remembered for their unspoken role in enabling American explorers to be first to reach  the Pole.  Since a number of the American explorations in which they served were military or quasi-military, there is even greater reason to acknowledge them as  military working dogs.  They played a vital role in enabling Americans to “win” the North Pole.  Now, as nations vie for  the natural resources of the Pole, that accomplishment matters more than ever.