Larsen Bay: The Perspective of a Tender Captain 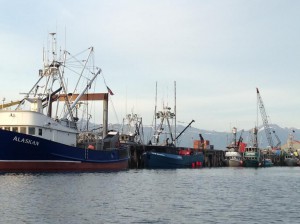 Tender ALASKAN at the dock.

If I were to quantify the mileage that I have accrued over the last five years walking up and down the dock of Icicle’s Larsen Bay Cannery; I’m fairly certain that it would easily land within the upper double digits. Quite incredible, really. With regards to physical time spent in Larsen Bay, I’m easily within a year and a half of my life. However, one rarely grows to appreciate something through clinical mathematical calculation. Rather, it’s the appreciation of the minutia – that aggregate as a whole, through which we are able to appreciate a specific place. One of these “places” for me is the salmon cannery in Larsen Bay, Kodiak Island, Alaska.

Beginning in 2010, and with the exception of one year, I’ve spent June through September tendering for Icicle Seafood’s Larsen Bay salmon cannery aboard the F/V Alaskan, of Kodiak. Things such as the quickest route to the cannery’s office, my first season as captain, which dock boards to avoid tripping on – various treasures that I’ve pilfered from the cannery’s boneyard – all things from this place are engrained within my mind. I find it even more fascinating to ponder the fact that my own Larsen Bay story pales in comparison to others’ vivid and marked past with this place.

Much like the vessel that I now captain, I’ve always found it intriguing how the cannery is a self-sufficient place. Bustling with hundreds of workers and fisherman throughout the summer months, only to return to a veritable state of hibernation in the winter – the cannery exists in an entirely literal interpretation of the phrase “cyclical nature”. The winter, spring and fall months leave the docks, warehouses and processing lines lying idle – waiting for the coming season, all occurring amidst the unforgiving, remote  and often harsh Alaskan wilderness. Until recently, my personal sense of the true historical importance of this facility has been lacking. Almost comical, really – how I’d spent so much time there, yet remained utterly clueless with regards to the actual work that was occurring. Of course – there is the obvious: salmon comes into the plant on one end – and emerges in a can, iced tote or freezer container van at the other end. However, I’d always merely peered into the factory buildings as if I was a kid staring into the vastness of Mr. Wonka’s Candy Workshop.

Until recently; three days ago to be exact. Waiting to offload, I finally asked the fleet manager for a tour. Choosing one word to describe the cannery in its entirety: fascinating. I find it astounding how the overall canning process has remained relatively unchanged since the facility’s inception in the early 20th century. The noises, the smells – the amount of work that’s still dependent on people – not machines.  Observing the synergy that’s essential to the entire operation. Further, witnessing the symbiotic relationship between human and machine. Machines, and equipment which for all intents and purposes still share recognizable similarities with the relative artifacts that were hauled there over one hundred years ago.

In an age where manufacturing and economic efficiency is often dictated through automation, outsourcing and various other de-humanizing factors – places like these remain steadfast. Many of the pieces of machinery at this plant are the only examples remaining in the world; serving as tangible vestiges of this industry’s heritage and past. One bold embodiment of the pioneering spirit that at one time was ultimately pervasive throughout the region – and our country as a whole – are the select group of craftsmen (and women) who keep these machines and operations working. Be it mechanical necessity, economic imperative – or, perhaps a sense of greater historical importance – parts must be crafted by hand, repairs executed quickly and sometimes crudely – but the job gets done.

Google won’t aid in the repair on an Iron Chink; the cellular service here isn’t 4G. The people who man these operations aren’t following the recent bourgeois movement towards boutique craftwork and “makers” – they’re the real deal. A rare breed.

Economic efficiency rarely lends itself to historical preservation. The face of hard fiscal inevitability and capital outlay may play a drastic role in the future of the cannery facility in Larsen Bay. Surely, the buildings will continue to stand the test of time and weather in the Bay. Yet, it’s the personal stories, both past and present that are equally important to us all. Stories which provide an essential element to the tangible realm of tin and canning machines. Without the active preservation of both aspects of this place; we risk losing them forever amidst our ever-increasingly impersonal world.