September 29, 1849 - Frederick Schwatka, who became noted as an explorer of Alaska, was born in Galena, Illinois.

On the Shores of Mitkof Island 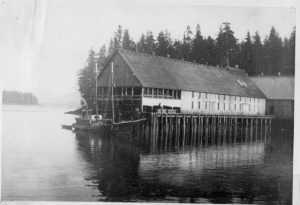 The shores of Mitkof Island were pretty quiet for millennia.  Mitkof Island was a great little spot for summer visitors, people interested in catching life sustaining fish, but the island never caught on as a place to set down roots.  In 1898 that changed.

Petersburg, Alaska is a small town on the northern tip of Mitkof Island.  All indications lead us to believe that the town of Petersburg was the first permanent settlement ever constructed on the island.  There are many fish trap sites filled with artifacts and middens, some dating back 2000 years or more, but there is no evidence of a permanent village site.  You might ask why anyone would settle a place that had been discarded as a habitable location for centuries.  The answer is fish.  People have utilized the fishing resource Mitkof Island provides for millennia.  Nobody is quite sure why it was never settled by the Native people in the region, but theories abound.  Some think it is because of the weather patterns, others think it may have been a buffer zone between Native groups.  For whatever reason, the island that was least inhabitable to Southeast Alaska Native people, seemed to be the ideal location for Norwegian fishermen and their families.

Peter Buschmann, a Norwegian entrepreneur from Aure, Norway was in the business of setting up fish canneries and salteries along the shores of Alaska’s inside passage.  Petersburg is located between Sumner Straight to the south and Fredrick Sound to the north with the Wrangell Narrows sliding along it’s western shore. Peter Buschmann would have sailed by the island many times while managing his operations to the north and south.  He would have had to notice the large icebergs from LeConte Glacier floating in Fredrick Sound and thought it would be a good idea to expand his holdings with a cannery site on Mitkof Island.

In 1899 the Icy Straight Packing Company was built on the northern shore of Mitkof Island with money from people who had invested in his other operations.  Peter Buschmann needed a workforce so he sent word to Norway and friends and relatives showed up to work.  He also brought Chinese people to Petersburg to work in the cannery. Later, Native people from Kake joined the workforce.  Salmon was plentiful in the area, as was halibut. The ice from LeConte Glacier kept the halibut cold all the way to Seattle.  Salmon was canned and salted and sent south too. 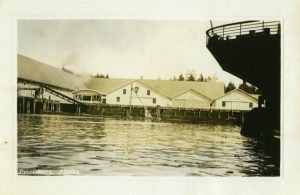 Norwegian settlers continued to make their home in Petersburg, which became an incorporated city in 1910, two years after the initial articles of incorporation were rejected because women had signed them.  By 1910,  the Icy Straits Cannery had been purchased by the Pacific Packing and Navigation Company in 1901 and the Pacific Coast and Norway Packing Company in 1906.

In 1918, after going through bankruptcy proceedings, the Norway Packing Company reorganized as the Petersburg Packing Company, with Oscar Nicholson as superintendent.  He operated the cannery until 1933 when it was sold to Pacific American Fisheries.  In 1965, Bob Thorstenson organized a group of Petersburg residents and fishermen to purchase the cannery from PAF.  The Petersburg stockholders named their cannery Petersburg Fisheries Incorporated, PFI.   The company expanded and became Icicle Seafoods, one of the largest fish packing plants in Alaska. In 2010 Petersburg stockholders sold their Icicle shares to Paine and Partners, an equity firm and in 2016, the plant was purchased by Cooke Aquaculture, a Canadian fish company.

The Clausen Memorial Museum has many images of canneries taken from 1998 through the present day.  We have spent the last year locating these images, entering them into our Past Perfect data base and storing them appropriately.  The Icy Straits Cannery, which is now Icicle Seafoods, has been the lifeblood of our town and the images bring Petersburg’s history to life.  We also have images of the many other canneries that have and continue to operate on Mitkof Island.  Individuals and organizations are now able to obtain historical cannery images from our museum.