Valuable Port of Anchorage Historical Documents to be Digitized

History is sometimes found in the most mundane of places, from old business ledgers stuffed in a Nordstrom shopping bag to a pictorial scrapbook tucked into a nautical chart cabinet.

A few years ago, while researching in the Port of Anchorage Marine Library, I discovered two oversized folios with clippings and photographs of the early history of the port. When I looked at them I experienced the historian’s frisson of thrill! A treasure trove of documents. 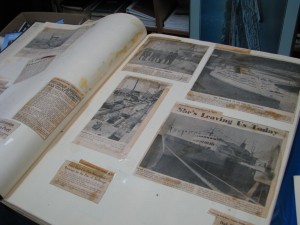 Deteriorating pages of the folio showing the history of the Port of Anchorage. (Photo by J P Goforth)

This November I was awarded a contract with the Port of Anchorage to digitize the books and make them available to the public. This contract is the result of several years of effort on the part of Port of Anchorage and the Port Commission’s History Committee and myself to organize, catalogue, and preserve the port’s historical documents.

The project covers two folios, oversized hardbound ‘scrapbooks’ of 256 pages each, that represent a treasure trove of factual information about the creation, construction, and business of the port dating back to the late 1950s. This is the only such compilation of the port’s history. Photographs, newspaper articles, advertisements, and other materials were pasted into the folios over many years. The articles range from photographs and descriptions of visiting vessels like the WICKERSHAM to articles about the 1964 earthquake damage and the crowning of Miss Port of Anchorage. Fifty-five years later the newsprint is yellowing, browned from glue, and flaking apart. The deterioration puts the content at risk of being lost.

Former Port Commissioner John Stallone initiated the discussion on digitizing the material in 2011. “We should be able to have the public see this stuff. There is so much in there about the people who worked at the port. We need to make this widely available,” he said. Over the next few years, I worked with Port Director Richard Wilson and current Port Director Stephen Ribuffo on crafting a plan to preserve the material. With approval from the Municipality of Anchorage, this important project is now underway. The work is expected to take approximately four months. 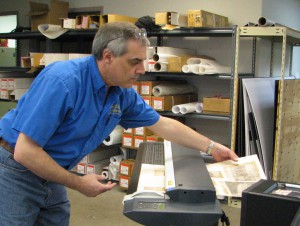 The 20 inch by 26 inch folio pages were disassembled and individually hand fed into a ColorTrac II scanner. Dave Dubois gently handles the pages going in and coming out. (Photograph by J P Goforth)

Digital Blueprint, an Alaska reprographics firm, will scan each of the 512 pages through a single feed optical scanner. I will process them through the Adobe Acrobat Optical Character Recognition (OCR) program. This text recognition will apply to captions, the text body of articles and even headlines and advertisements. The resulting key word searchable files will be in PDF format. Meta data, identifying each page will be appended. The finished project will reside on the Municipality of Anchorage server. The public will be able to access the files on the on the Port of Alaska history web pages in the spring of 2016.

The thrill of discovering these records and making them publicly available is reminiscent of my earlier experience with nineteenth-century business ledgers of the Alaska Commercial Company (ACC).

Three years ago I discovered a set of lost ACC business ledgers written in the 1870s. There were in a basement in Snohomish, Washington, quietly waiting in a shiny silver Nordstrom bag. As soon as I saw them I knew they were some of the rarest business documents from the ACC Unalaska District. The Cash Sales and logbooks of daily events at the company trading posts are invaluable time capsules of the culture of the Unanagan during the transition from Russian domination to American territory. The historical record is thin during the years right after the Treaty of Cession in 1867. 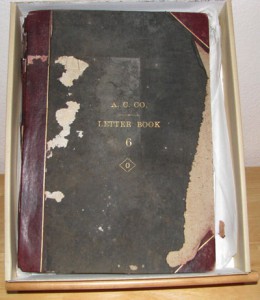 I presented a proposal to the Alaska Humanities Forum to transcribe and digitize all six ledgers. The AHF, ACC, and Aleutian Pribilof Islands Community Development Association matched funds, and the fascinating details of Aleutian life emerged. The most satisfying part has been helping modern day Aleuts find their ancestors through the listings of hunters in the Winter Hunting Party of 1886. You can easily see from the accounts for each sea otter hunter who were the ‘highliners’ of the day. The transcripts of the ledgers are available in a series of DVDs containing the original scans from the ledger pages. I am now writing a book about the project, The Voyages of the Lost Aleutian Ledgers.

Having had the previous experience of working on the ACC ledgers, I can use the same technical expertise to make the Port of Anchorage records just as accessible. The history of the Port of Anchorage is a vital component of the city’s history. Some say without the railroad there would be no Anchorage. I say without the port, with its tenuous toehold in the silt of Ship Creek, there would be no Anchorage.

J. Pennelope Goforth is an active member of many maritime history organizations. Her work appears in the AHS blog, the Puget Sound Maritime journal Sea Chest, Alaska Business Monthly, Alaska Dispatch and other Alaska publications. Her efforts on the Alaska Commercial Company project earned her an award from the Alaska State Historical Records Advisory Board (ASHRAB) and the Pathfinder Award from the Alaska State Historical Society in 2012.