How to Discover Alaska’s Past in Newspaper Databases 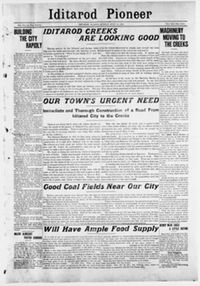 In the past decade, a revolution has been taking place that makes historical newspapers widely available and easy to use. Whereas before, researchers spent long days in libraries poring over miles of microfilm, now libraries and other institutions are scanning their newspapers to allow the use of Optical Character Recognition, or OCR. With OCR a researcher can, with the click of a button, find any word or phrase in thousands of newspapers. Although using online databases requires some patience and practice, the process is lightning fast compared to using a microfilm reader.

Since 2010, the Alaska State Library has been participating in a national program to digitize historical newspapers for a Library of Congress database called Chronicling America. This effort is ongoing, but it has already added more than 150,000 pages from forty Alaska newspapers ranging in date from 1898 to 1963. Many Alaskan newspapers also appear in subscription databases like Newspapers.com and Newspaperarchive.com that are international in scope or Genealogybank.com that offers only American papers. These are all an enormous boon to researchers who want to use Alaska’s newspapers in their projects.

In addition, the Alaska State Library offers two important tools for researchers using Alaska newspapers. The first is a guide to Alaska newspapers by Mary C. Nicholson entitled Alaska Newspapers on Microfilm, 1866-1998. This monumental work will help you figure out what newspapers existed in which Alaska communities and when. And the second is the Searchable Database of Juneau and Fairbanks Newspapers. This online index can help you find what you seek in a dozen Interior Alaska newspapers and in the Juneau Empire from the state’s capital. Both can be found at: https://library.alaska.gov/hist/newspaper/news.html.

However, Alaska’s papers are not the only place to discover Alaska’s past—Alaska history can be found in newspapers all over the United States, Canada, and beyond.

During the Klondike Gold Rush, for example, newspapers were hungry for news from the northern gold fields and they printed whatever they could find. Papers from Bellingham to Boston contained letters that stampeders sent to their families (and which the families then turned over to local newspapers), eyewitness accounts from gold miners, obituaries, ship’s manifests, and reports from soldiers or government officials. Also, big East Coast newspapers sent correspondents northward who wrote lengthy descriptions of life in the Far North and transcribed their interviews with gold-seekers. Events of national significance, like the struggle between the U.S. and Canada over the location of the boundary, were reported internationally. Like a collection of letters or a person’s diary, newspapers contain a wealth of factual information and (best of all) in the voices of eyewitnesses.

The following is a tutorial on how to begin using newspapers to greatest effect:

You might want to know what Sitka’s earliest newsman, T.G. Murphy, a.k.a. Barney O’Ragan, had to say in his handwritten Alaska Times in the 1860s. You might be interested in the origins of Ketchikan as a town in the 1880s or in the life story of founder Mike Martin. Or perhaps you are writing about the use of “sourdough” to make bread during the Klondike Gold Rush. Whatever it is, you can find it in newspaper databases.

Optical Character Recognition works using keywords. These might be single words or even fragments of words. They might be word combinations or phrases. You might surround your keywords with quotation marks, which ensures that the search engine always looks for those words together and not scattered across a newspaper page. The more specific you can be, the quicker you can find what you are seeking.

Names can be enormously useful as keywords, but it matters if the name is common or not. A search of “Thomas Jones” will likely net thousands of hits (and take a long time to sift through), whereas if you are searching for “Byron Adonis,” you will find your man much sooner. Likewise, if you are researching “Anchorage,” you will find plenty of places to anchor your boat, but if you are researching “Skagway” that won’t be a problem. But you will need to be aware of alternate spellings like “Skaguay.”

Most newspaper databases offer the option of browsing whole papers page by page, which is helpful if you don’t quite know what you are looking for or if you know the date something happened and want to know everything that happened around that time. Also, be aware that OCR is not perfect and you might want to double-check the newspapers by eye for things the technology missed.

If you are lucky, you might find that the person or event you want to research appeared frequently in one newspaper. However, if you are researching a person who moved around, that will require searching papers in various towns. And if the town or mining camp (following the Klondike Gold Rush example) did not yet have a newspaper, you may have to rely on the nearest town with a newspaper and hope that news of your person or mining camp made it into print.

Once you know your topic (and associated keywords) and the geographic areas that might be involved, you can then start to identify which newspapers, and which databases, might be useful to you.

If, for example, you want to research the experiences of a Klondike stampeder from California to Dawson City, you might want to start with the California Digital Newspaper Collection. This database is free and contains hundreds of California newspapers.

If you are researching the economic boom in Seattle that resulted from the Klondike rush, you may find yourself using the Seattle Times newspaper database. For this one you need to pay for a subscription, and the database contains only the one newspaper. Most newspapers in business today have information about research databases listed on their websites.

If you are following a passenger on a ship that stopped in Victoria, BC on its way to Alaska, you will likely use the British Colonist from that city. The database is free, the search engine is a bit quirky, but the newspaper contains plenty of useful articles about events related to the gold rush and to events in Alaska.

The aforementioned Chronicling America contains newspapers from across the United States, and a number of states offer their own newspaper databases, including Washington, Oregon, Colorado, Nevada, and New York. They are all free.

Subscription-based databases are very valuable tools. Researchers must pay by the week, month, or year, but the vast numbers of newspapers and the sophistication of their search engines make these databases worth the price. These include Newspapers.com, Newspaperarchive.com, Genealogybank.com, and others. Some of these include, in addition to newspapers, the ability to search military records, census records, government documents, and other sorts of sources material.

Once you have begun searching databases, you will find that they are all slightly different and that it takes some experimentation and patience to learn how they work. For example, in one database you can clip just the article you want from a full newspaper page while in another, you must save the entire page and clip your article with separate software. Or, one database will allow you to search for two words located within five or ten words of each other; another database will not have that option.

Depending on your needs, you have several options for viewing and saving your news discoveries. You could: 1) view the material on the computer screen and take notes or transcribe the whole thing on paper; 2) save the whole newspaper page as a .pdf file and view it later; 3) clip or crop just the article you want and save it (as a .pdf, .jpg, or .tif) for later use; or 4) print what you need directly from the database and use your hard copy as your only record.

Whatever you choose to do, keep these two things in mind. First, make sure to record the article name or headline, the newspaper name, the date of the newspaper, and the number of the page where your article appears. In some databases, all of this information is included when you print a page or appears in the electronic file name, but in any case you will later need this information to create complete footnotes. And second, when you want to print a hard copy, you must take into account the size of your article. If the original is large (e.g. it stretches over a full page or is several columns wide) and you need to fit it onto an 8.5” x 11” piece of printer paper, you won’t be able to read the tiny print. Instead, you will need to crop the article and print only 1/3 or 1/4 at a time.  That way you won’t have to squint or use a magnifying glass.

You are now on your way to discovering a bonanza of Alaska history material.

Caveat emptor:  As with any historical source material, newspapers need to be viewed with a critical eye. Newspaper editors can have political affiliations and agendas. Reporters can peddle sensational versions of events to boost readership. And erroneous or bastardized versions of events are not uncommon, especially when a news story is picked up and reprinted (or even rewritten) by newspapers across the country. However, if you are selective and apply the same care to newspapers as you do to other types of sources, they can be an enormously valuable resource.