June 17, 1953 - The military port of Whittier was virtually destroyed by a $20-million fire said to have been the most costly fire in Alaska. 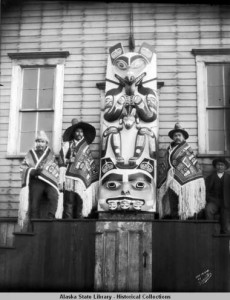 The Alaska Historical Society has the following books for sale:

The Alaska Historical Society. The Alaska 67: A Guide to Alaska’s Best History Books. Walnut Creek, CA: Hardscratch Press, 2006. 95 pp., ISBN:0-9678989-9-4. Price: $16.50.
Editorial board members provide insightful synopses and capsule reviews of all 67 titles, making this book an essential reference for those interested in exploring Alaska’s past. In his introduction, historian Terrence Cole points out that this is a “working list, not an honorary hall of fame of books that all might praise and none would read.” He goes on to note that selecting best books is “as hazardous as selecting one’s ‘best’ children . . . it is bound to cause trouble.” But according to Bob DeArmond, former newspaperman and 95-year resident of Alaska, “The Alaska 67 will service readers of Alaskana well.”

Len’kov, V. D., G. L. Silant’ev, and A. K. Staniukovich. Komandorskii lager’ ekspeditsii Beringa (Opyt kompleksnogo izucheniia). [The Komandorskii Camp of the Bering Expedition (An Experiment in Complex Study)]. Translated by Katherine L. Arndt. Edited by 0. W. Frost. Anchorage: Alaska Historical Society, 1992. xvii, 156 pp., appendices, index. ISBN 0- 940521-00-8. Price: $12.00 (paper); AHS members $9.60.
“The monograph presents the results of a complex study of the site of the winter camp of the Bering expedition in Komandor Bay of Bering Island [Russia], 1741-1742. It analyzes the collection, which clearly illustrates the material culture of Russian seafarers of the 18th century. Both written sources and the results of the archaeological excavations of 1979 and 1981 were used in the investigation. Natural science methods were applied.” – verso of title page.

Pierce, Richard A. Russian America: A Biographical Dictionary. Alaska Historical Commission Studies in History, No. 132. Kingston, Ontario and Fairbanks, Alaska: Limestone Press, 1990. xxii, 555 pp., [14] pages of plates. ISBN 0-919642-45-4. Price: $40.00 (hardcover); AHS members $32.00.
“The 675 lives described here include anyone who influenced developments in Alaska in that period [1741-1867], not only Russians who were there, but sovereigns and high court officials in St. Petersburg; British, French, Spanish and American seafarers; Finlanders, Americans and people of other nationalities who were employed by the [Russian-American] company; and Native Americans. Under Russian supervision, Russian America was truly an international enterprise involving the efforts and sacrifices of many peoples.” – p. xx.

Mercier, Francois. Recollections of the Youkon: Memories from the Years 1868-1885. Translated, edited and, annotated by Linda Finn Yarborough. Alaska Historical Commission Studies in History, No. 188. Anchorage: Alaska Historical Society, 1986. xv, 102 pp., biblio., index. ISBN 0-9437-12-19. Price: $10.00 (paper); AHS members $8.00.
“Translated for the first time into English and illustrated with photographs of the period, Recollections of the Youkon is a vivid description of life along the Yukon River during the years 1868-1885. These memoirs of Francois Xavier Mercier provide a detailed personal view of fur traders, prospectors, women, missionaries and Natives during this little-known period of Alaska history.” – back cover.

Nash, Roderick. “Tourism, Parks, and the Wilderness Idea in the History of Alaska.” Alaska in Perspective, v. 4, no. 1 (1981). Anchorage: Alaska Historical Commission and the Alaska Historical Society, 1981. 28 pp. Price: $0.50 (pamphlet); AHS members $0.50.
In this remarkable essay, Roderick Nash gives a concise history of Alaskan tourism and wilderness attitudes from John Muir’s 1879 trip to the more recent popular, wilderness-oriented tourism with its emphasis on actual tourist contact with nature. Nash is a professor of history and environmental studies at the University of California at Santa Barbara who has written extensively on conservation issues and environmental history.