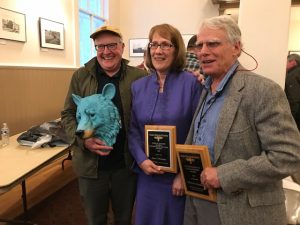 Select a link from below to view past award recipients.

The James H. Ducker Historian of the Year Award is given to an Alaska resident for publication of important new material about Alaska history during the past year. The award recognizes historian James Ducker who edited the Society’s scholarly journal for 30 years. The award includes a cash prize.

The Evangeline Atwood Award is given to an individual for significant long-term contributions to Alaska state or local history. The award is named for one of the founders of the Alaska Historical Society who wrote, supported, and advocated for Alaska history from the 1940s into the 1990s.

The Barbara Sweetland Smith Pathfinder Award recognizes contributions to the discovery and description of resources relating to Alaska history. Barbara Smith was a historian, archivist, and exhibit curator who contributed much to Alaska history and to the Alaska Historical Society.

The Elva R. Scott Local Historical Society Award recognizes a community historical society or museum for its newsletter, a publication, programs, or a special project. Elva Scott was a founder of Homer’s Pratt Museum and after moving to Eagle was the newsletter editor, tour guide and officer of its historical society.

The President’s Award/Beaver Log is given by the Society’s president for outstanding contributions to the society.

The Terrence M. Cole Student and Beginning Professional Travel Scholarship Awards are cash awards given to help individuals attend and participate in the Alaska Historical Society’s annual meeting and conference.

The Alaska History Award is made by the editorial board of Alaska History, the Society’s journal, for the best article published in the last year. The award includes a cash prize.