In 1799, shipwrights in Dighton, Massachusetts, completed construction of the Juno. According to ship registries in Rhode Island, where the Juno was registered in 1800, she measured 82.5 feet long, 24 feet wide, and 12 feet deep, and could displace up to 295 tons fully loaded. [1] A three-masted ship with two decks, the Juno was a fast sailing merchant vessel that had a sharp keel lined with copper. Records say that she was fitted with a female figurehead on the bow, likely a representation of her Roman namesake. Her second captain, John DeWolf, considered her a “crack ship” for her time, outfitted to embrace “all that was needed for both comfort and convenience.” [2] Like many merchant vessels of the day, she was armed to ward off pirates and privateers. This gave her what DeWolf called a “formidable and warlike appearance.” 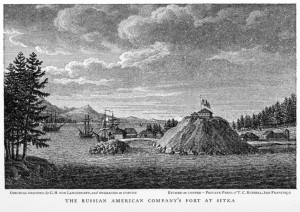 The JUNO (three-masted ship closest to the trees on the left) in sketch of Sitka harbor by Georg Langsdorff. Click on image to see larger version. (ASL Alaska Purchase Centennial Collection, ASL-PCA-20)

Commerce first brought the Juno to the North Pacific in 1802. [3] She was one of many merchant vessels that were constructed for the international commerce that ran through American ports. Such ships were the financial backbone of Thomas Jefferson’s expanding Empire of Liberty. [4] By the end of the 18th century, wealthy New England families had commercial contacts that spanned the globe. After the publication of Captain James Cook’s memoirs from his third expedition, these merchants discovered the burgeoning sea otter trade with China. The Juno was dispatched by the DeWolf family to participate in this trade a decade after it was established. Her captain was to trade household goods or firearms to the indigenous populations between the mouth of the Columbia River and Sitka (primarily the Tsiamshian, Haida, and Tlingit peoples) in exchange for sea otter pelts. These pelts were, in turn, used to purchase Chinese goods for American consumption.

The Juno became one of the primary means for the Russians to exert control over their disparate Pacific Northwest holdings until she sank in 1811. She was used as a vessel of science, exploring lands north of San Francisco for future settlement (Fort Ross in 1812). Natural historian Georg von Langsdorff’s voyage aboard the Juno enabled him to compare and contrast natural history and indigenous populations in Spanish America and Russian America. She provided protection to the newly established colony of Sitka, and defended fur hunting parties led by employees of the Russian American Company. She was also a ship of war and diplomacy during her short stint of service for the RAC.

The Juno became a Russian vessel during her second voyage to the Pacific Northwest coast. On August 13, 1804, she weighed anchor, sailing from Rhode Island. John DeWolf, the 24 year-old nephew of the ship’s owners, was named captain and supercargo with a crew of twenty-six men and boys. DeWolf arrived on the coastline of the Pacific Northwest in April of 1805, trading with local populations along the coast before ultimately selling the Juno to the Russians, who recently conquered Sitka Island and established the outpost of New Archangel. DeWolf agreed to sell her to the RAC for $68,000, payable with bills of exchange on the Directors of Russian American Company for $54,638 in St. Petersburg, 572 sea otter skins valued at $13,062, $300 in cash, and a small Russian vessel so that DeWolf’s crew could sail to China to sell the pelts they had amassed.

On October 5, 1805, the American flag was transferred to the small Russian vessel Ermak, and the Juno became the Yunona. The Ermak set sail on October 27 for Hawaii before heading on to Canton with one of DeWolf’s officers, George Stetson, in command. [5] Confirming the low quality of ships in the RAC’s service, one Russian official wrote, “May God help them, so that they will not have to pay too high a price for their adventurousness.” [6] DeWolf agreed to stay at the settlement until spring 1806. From there, he would head to St. Petersburg overland to complete the sale of the Juno before heading back to America via the Baltic and Atlantic trade routes.

In February 1806, Count Nikolai Petrovich Rezanov, who was in the colonies to inspect them on behalf of the tsar and the RAC, had the Juno prepped to travel to the small Spanish outpost of San Francisco. He hoped to open permanent trade for grain and supplies for the Russian colonies. Rezanov was ultimately unsuccessful, but the trip provided some supplies, opportunities for exploring and natural historical investigations of the area. [7] The voyage is perhaps most popularly known because of Rezanov’s sudden betrothal to the Spanish commandant’s daughter, Donna Concepcion de Arguello. Their tragic love tale has been retold by American and Russian poets, novelists, and in the Russian rock opera Yunona i Avos. [8]

Shortly after the Juno’s return to Sitka, she was made ready for another of Rezanov’s pet projects: a punitive expedition against the Japanese. Rezanov was initially sent around the world from St. Petersburg in the hopes of opening relations with Japan. His mission failed after languishing in Nagasaki for six months. But Rezanov, appointed as a chamberlain to the Court of Alexander I before his departure from Russia, was determined to force the Japanese to open trade with Russia’s colonies, by force if necessary. He planned to use the Juno and the Avos, a smaller vessel recently finished at Sitka, to raid Japanese colonies that were located in the Kurile Islands and on Sakhalin Island; both of which were claimed by the Russians based upon fur hunting expeditions sent there in the 18th century.

In September 1807, after the Juno was provisioned for the expedition, Rezanov gave the ship’s captain a confusing order to return to Russian America but stop at Sakhalin first if possible. Lieutenant Nikolai Aleksandrovich Khvostov decided to follow through with the original plan since Rezanov had set out for St. Petersburg before the orders could be clarified. Khvostov sailed for Aniva Bay in October, 1807. The Juno raided several Japanese villages on southern Sakhalin Island. [9] During these operations, Khvostov seized over 19 tons of rice, and looted tobacco, fishing nets, and various household goods. He also nailed a copper plate onto the torii of a Japanese temple, demanding that Japan open trade or face more raids. [10] A subsequent series of raids in the spring of 1808 resulted in the sacking of Japanese settlements in the Kurile Island chain. [11]

The RAC distanced itself from the attacks, passing responsibility onto Rezanov, acting in his public capacity as court chamberlain rather than his private role as plenipotentiary and major shareholder of the RAC. The Russian government similarly distanced itself from the actions by blaming the RAC. In a dispatch to the Japanese government, Russian officials claimed that the attacks were instigated by company officials, whose employees were often “vagabonds and adventurers” that drank excessively, and treated native populations poorly. [12] The Japanese responded by quickly refortifying positions in the Kuriles and on Sakhalin. Itorup was garrisoned by 2,500 Japanese soldiers by 1808. Japanese sources also record large troop movements on Hokkaido and Honshu in the aftermath of the attacks. [13] Diplomatically, the fallout from the attacks was felt throughout the nineteenth century, as Japanese officials continued to blame poor relations upon the Juno raids. [14]

After returning to Russian America in 1808, the Juno spent the next three years protecting RAC hunting parties and transporting goods to and from the Russian mainland. In May 1810, an American captain spotted the Juno at Clarence Strait, approximately 110 miles southeast of Sitka. She was heading towards the California coastline with an American ship on a joint hunting expedition. But the Juno did not complete this voyage. Hunters in the expedition came under attack by the Haida, south of Sitka. After eight of them were killed, the Juno retreated to Sitka. Russian personnel blamed renegade Yankee ship captains for instigating the attacks, arguing that many of them feared Russian influence expanding south of Sitka.

In July 1811, Russian colonists at Sitka loaded the Juno with a cargo of sea otter furs and goods recently obtained from Canton via American intermediaries. The cargo was valued at over 200,000 Russian rubles, and destined for Petropavlovsk. Such trips normally took two months, but the Juno encountered stormy conditions and contrary winds. On November 15, 1811, less than twenty-five miles from Petropavlovsk, a storm tore away the steering gear and chains, leaving the Juno helplessly adrift. After a failed attempt to anchor in a nearby bay, strong currents and winds dragged the ship onto a reef. The surf then pounded the vessel until it was slammed into the rocky shore, each wave carrying away more of the timbers, cargo, and crewmembers until all but three were lost. [15] The survivors reported to Petropavlovsk what occurred. A partial report from the captain was found among the wreckage and bodies. It read,

With the vessel entrusted to me, I have arrived from the port of Novo-Archangelsk [Sitka] in the most wretched condition. I have been sailing for three months from the Northwest coast of America and struggling against unending storms. Now already in sight of the shore here for 19 days, I have only 3 sailors and they exhausted, and 5 young apprentices whom I brought with me for training; of them, the two oldest perform sailors’ duties in addition to their own. The other three take the wheel, bail out water (which comes aboard during strong winds at the rate of 5 inches every hour) throw out the lead sounder and keep the ship’s journal. Sailing a three masted ship with these 8 people is a difficult undertaking, the rest of my crew… [16]

With that, according to an RAC official, the report ends.

In September 1812, the RAC sent Tsar Alexander a report detailing the loss of the Juno. The directors were nevertheless upbeat about the future prospects of goods arriving from the colonies. During the War of 1812, Russians were able to purchase additional American vessels that were stranded in the Pacific due to the British blockade of American ports. Replacing the rickety vessels built in the colonies, these ships and the Neva from St. Petersburg would provide a more secure military and commercial footing for the Company’s exploitation of resources along the Alaska coastline for years to come. But without the Juno, it is unlikely that the colonies would have survived long enough for this to occur.

[2] John DeWolf, A Voyage to the North Pacific and a Journey through Siberia More than Half a Century Ago (Cambridge: Welch Bigelow, and Company, 1861), 2.

[3] Some sources incorrectly attribute captaincy and ownership of the vessel during this period. For a full analysis, please see Tobin Shorey, “Navigating the ‘Drunken Republic’: The Juno and the Russian American Frontier, 1799-1811” (Dissertation, University of Florida, 2014).

[4] Jefferson’s phrase “Empire of Liberty” has been used to describe American political economy during the Jeffersonian period as well as Jefferson’s expansionist tendencies and his seemingly incongruent political philosophy on individual liberty and limitation of state prerogatives. As president, Jefferson sought to eliminate taxes where possible, relying instead on import duties to fund the American government. See Robert W. Tucker and David C Hendrickson, Empire of Liberty: The Statecraft of Thomas Jefferson (New York: Oxford University Press, 1990), 35.

[5] Rezanov reported to the company that Ermak made it to Hawaii under American ownership with no problems and continued to Canton. See “A Confidential report from Nikolai P. Rezanov to Minister of Commerce Nikolai P. Rumiantsev, Concerning Trade and Other Relations between Russian America, Spanish California and Hawaii” in The Russian American Colonies: To Siberia and Russian America 1798-1867, Volume 3 (Oregon: Oregon Historical Society Press), 147.

[8] First performed in 1982 in Moscow’s Lenkom theatre, the opera is still successful in Russia today.

[14] Wildes, “Russia’s Attempt to Open Japan,” 70-79. Wildes noted that “[a]s late as 1882, the chief of Japan’s Geographical Society, Admiral Viscount Buyo Enomoto, wrote a series of articles tracing the origin of Russo-Japanese hostility to their activities.”