A Nickel a Tail

Among the countless conservation measures that have been applied to Alaska’s salmon fisheries throughout history, one of the least effective—but at the same time most interesting—is predator control.

Few sights got a canneryman’s blood boiling quite like eagles, gulls, sea lions, trout, and all the rest snatching up mature or juvenile salmon from a spawning stream. The heyday of predator control in western Alaska occurred in the 1920s and 1930s when the federal and territorial governments collaborated with the packers to destroy these “enemies”.

In 1929, the Alaska Territorial Legislature enacted measures under which bounties would be paid to Alaska residents who killed certain salmon predators, especially Dolly Varden in the streams and lakes of Bristol Bay and the Alaska Peninsula. A single trout could consume hundreds of fry and thousands of roe every day, and fishermen saw each and every one as a potential adult salmon stolen from their nets.

Under the bounty program, Alaskans received a nickel for every Dolly Varden tail they turned in to federal fisheries agents. William Sullivan, the warden for the Becharof Lake region near Egegik, reported that twenty-four Alaska Natives and six white residents participated in 1929-30, and that “60,387 trout tails were delivered…and paid for at the rate of five cents each amounting to $3,019.35.” Funding was initially provided by the territory, though the packers eventually contributed (some reluctantly) on a case-per-capita basis.

Many resident bounty hunters took the vouchers they received for the tails and walked right over the local store to make purchases on credit. Soon enough, they sidestepped the middleman and started bringing buckets of tails directly to the store. “In some cases, the cooperation of storekeepers in accepting trout tails in exchange for food supplies has facilitated prompt payment to the fishermen,” wrote a federal fisheries agent approvingly in 1939.

Although the bounty program provided a much-needed source of income for many Alaskans, it accomplished next to nothing by way of boosting salmon populations. Later study would reveal the eradication of a few thousand predators here and there exerts a negligible influence on an ecosystem as complex as that inhabited by anadromous fish. Like so many other topics in the history of canneries and fisheries, this one is as much about society, culture, and politics as it is about fish. 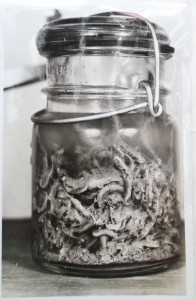