2017 not only marks the 150th anniversary of the Treaty of Cession, through which Alaska went from being a Russian colony to an outpost of the United States, it is also the centennial celebration of the Alitak cannery. 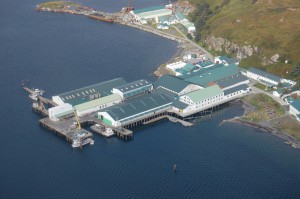 Alitak is located near the Alutiiq village of Akhiok, on the south end of Kodiak Island. The Alitak Packing Company was established in 1917, encroaching on what had previously been Alaska Packers Association fishing territory. In 1928, Pacific American Fisheries purchased the Alitak facility, adding a crab processing facility to the plant in 1959.

In January of 1964, a fire at the plant led to one fatality and the destruction of 15 company purse seiners, which were stored on the marine ways.  That same year, PAF sold the plant to Columbia-Wards Fisheries. Today it is owned by Ocean Beauty Seafoods.

While such a listing of events and facts is important to understanding the history of the Alitak cannery, it does little to convey the spirit of the cannery or the generations that have walked its docks. The superintendent of the facility, Woody Knebel, has not only kept the plant in production, he’s labored to keep the history of the place protected and remembered. He started a small cannery museum at Alitak and authored a book about the Alitak petroglyphs, images which Alutiiq ancestors chiseled into boulders in the vicinity of the cannery.

Moreover, he is collaborating on a book that will outline the events and characters that have kept Alitak running for a century. To learn more about the spirit of the Alitak cannery from Knebel himself, listen to the following segment within the Alaska Fisheries Report. It begins 3 ½ minutes into the program.

For stunning historic photographs of Pacific American Fisheries canneries in Alaska, including the Alitak plant, check out the Galen Biery Collection at the Whatcom Museum in Bellingham, Washington, here.