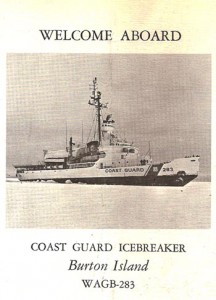 Twenty four years ago on February 15, 1972, Anchorage had a special visitor just in time for the 1972 Fur Rendezvous: the U.S. Coast Guard icebreaker BURTON ISLAND. The ship was one of nine icebreakers operated by the Coast Guard. (Today there are is only one, the HEALY.) Anchorage residents looked forward to the visit of the famous ship which promised an open house and a private dinner party for local officials.

These details and a brochure describing the vessel were recently found in the Port of Anchorage historical scrapbooks. The two huge folios, consisting of over 500 pages and weighing over 20 lbs. each, are in the process of being digitized. Created by port staff−containing news clippings, articles, advertisements, photographs, reports and memorial brochures like the one from the BURTON ISLAND−the folios cover the maritime history of Anchorage from 1958 through 1989. When completed the folios will be posted on the port’s history page as key word searchable pdf files.

Hundreds of people enjoyed the tours offered by the ship’s crew aboard the vessel each afternoon she was in port. Both the Anchorage Daily News (ADN) and the Anchorage Daily Times (ADT) newspapers covered the event. “The BURTON ISLAND, whose home port is Long Beach, Calif., is in these parts for a two-month tour of Cook Inlet and the Bering Sea for a marine mammal survey,” reported the ADN.  “An 11-man party of scientists and technicians is on board for the survey. In addition to the mammal survey the crew will conduct a trafficability study to determine the type of icebreakers needed to operate successfully in ice conditions peculiar to this area,” the ADT elaborated in a longer piece. “This is the second such study done in Cook Inlet by the BURTON ISLAND.” The articles were accompanied by photographs of visitors, the ship, and her officers: Executive Officer J.M. Fournier and Commanding Officer Captain George Schmidt.

According to maritime manners of the day, each visitor was presented with a brochure about the history of the vessel. In the 2nd folio the full brochure, with an insert showing the menu for the wardroom dinner party, has been preserved. In it the ships Alaskan exploits are highlighted. 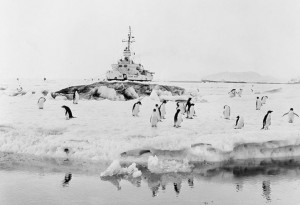 “BURTON ISLAND, a “WIND” class breaker, is named for a small island off the coast of Delaware. Following her commissioning in December 1946, she sailed to Antarctica. There she participated in Byrd’s Operation High Jump. This marked the opening of the vast ice continent to modern scientific study. She also pioneered operations in the Bering Sea, which lies between Russia and Alaska. In 1962, she made a record penetration for surface vessels in to the ice pack north of Alaska, by reaching a latitude of 79 degrees 11 minutes North, less than 650 miles from the North Pole. In December 1966, she was transferred from the U.S. Navy to the U.S. Coast Guard. After extensive refitting she made four deployments to Deep Freeze.

Operation Deep Freeze which began in 1955 provided logistics support for Antarctic research projects. The ship accompanied supply vessels breaking ice for the scientific program participants. She also served as a “floating platform for scientific research of many types, providing access for research scientists to isolated polar areas” according to the brochure. BURTON ISLAND will deploy to Arctic West in 1971 and ’72 and return to Deep Freeze in ’73.” 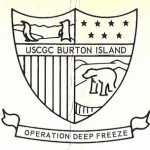 The ships crest bears testimony to her polar career featuring both penguins and a polar bear. The U.S.S. BURTON ISLAND was launched on 30 April, 1946 and commissioned 28 December 1946 as AG-88 for the United States Navy. On 17 January, 1947, BURTON ISLAND, loaded with supplies, steamed from San Diego to Ross Sea, Antarctica where she met with units of TF 68 on the first Antarctic Development project. After returning from Antarctica, BURTON ISLAND departed 25 July, 1947 for the Point Barrow expedition to Alaska. From April of 1948 to December of 1956, Burton Island participated in 19 Arctic and Alaskan cruises. Duties on the cruises varied including, supply activities, helicopter reconnaissance of ice flows, scientific surveys, underwater demolition surveys, and convoy exercises.

On 15 December 1966, the Navy transferred the vessel, along with all of its icebreakers, to the U.S. Coast Guard and she was renumbered WAGB-283. After the transfer, BURTON ISLAND was stationed at Long Beach California and used for icebreaking operations. Starting in 1967 through 1978, the ship went on eight different Deep Freeze operations to the Antarctic. The ship was responsible for creating and maintaining aids to navigation, clearing channels through the ice for supply vessels, and various other activities including numerous SAR missions. 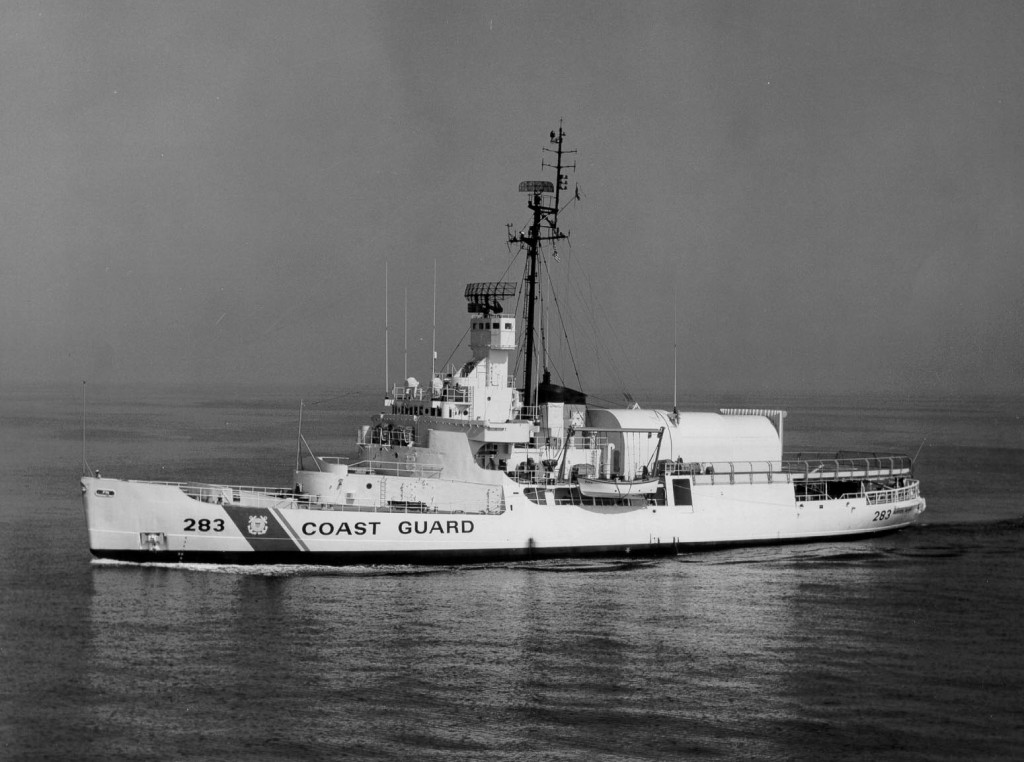 Presumably, Anchorage Port Director E. Erwin Davis was one of the guests at the BURTON ISLAND dinner since the menu was inserted into the brochure in the folio. From mid-1977 to 9 May 1978 she was stationed at Alameda, California and used for icebreaking. Decommissioned on 9 May 1978, the BURTON ISLAND was scrapped as of April 28, 1982.