Another Look at Buck

I’ve been volunteering at the middle school to lead a Literature Circle with a small group of 7th graders. Back in December, we read Jack London’s The Call of the Wild. Of course, right? It was even on a list of books for a contest this spring, one reason I chose it.

If you haven’t read it, it’s about a dog that’s stolen from a ranch in California, and sold as a sled dog on the trails to the Klondike during the Gold Rush. It is told from the dog’s point of view. 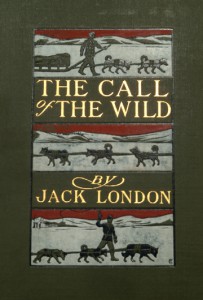 The first thing that I noticed, and that the students picked up, is that the book is extremely violent. When you look at accounts of the Gold Rush, particularly the Canadian dogsled mail service at the time, it becomes clear that London has created his own, ultra-violent world that bears little similarity to the actual Gold Rush.

Not that the Gold Rush wasn’t violent, but it was much sorrier and diffuse than what he depicts. I also brought in a book, The Call of the Klondike, by David Meissner and Kim Richardson, that I’d reviewed for the Alaska History journal. It is a true-life account of two young men, who at one point hosted Jack London in Dawson. Their dog was the model for Buck, the hero of The Call of the Wild.

The violence is just one of the departures from realism: at one point Buck finds a dozen wolverines feeding on a bear he’s killed. First of all, wolverines are solitary. Then he chases them off, killing two. Right! Then there is all the dogs-tearing-out-the-throats-of-other-dogs, which the humans seem to find amusing. And, the real Canadian mail was run in stages, so one team of dogs would not be running thousands of miles without a break, as Buck does. And, why do they keep selling Buck, when he’s “one in a t’ousand?”

The students enjoyed the story, in spite of the exaggeration, or more likely, because of the exaggeration. His descriptions of the violence are dramatic, and the relationship between Thornton (the man who saves Buck) and Buck is also well done, and is actually believable.

But, when you get to themes, it gets problematic.  Throughout the book he is setting up a relationship between civilization and the wild.

As far as “the Wild,” the struggle for survival seems to have two ways it can influence a person, or dog. The first is a brutal, thoughtless savagery, displayed by many characters, human and animal, and especially the Indians at the end. But, for a superior being, such as Buck, the Wild can actually improve a person or dog, by carving away all the softening effects of civilization, while leaving his moral nature intact, even purified.

This gets to the idea of Wilderness as a means of uplifting the (superior) soul to God.

Unfortunately, inborn superiority seems to be the core theme of the book. Buck, the dog, the main character, is a super dog, just as John Thornton, his human friend, is a superman. Buck is constantly fighting off much larger and more numerous foes, which gives the story a bit of a comic book quality.

Early on in the book London makes a reference to the “cold-tubbing races,” and he seems to have been a racist at heart. Some races, as well as some individuals, are superior to others.

He uses terms like half-breed and squaw, which are unacceptable today. This could perhaps be excused as simply the language of the times; but, unfortunately, in this book, it is part of a racism that is on the uglier end of the spectrum, even for his day.

At the end of the book, inexplicably, Indians passing through murder all the dogs and men in the camp, shooting them full of arrows. Then Buck arrives, and goes for the Indians, who are dancing, of course, in the wreckage of the camp. He kills some, and causes others to panic and shoot arrows and spears into each other, killing more. They then flee the “ghost dog” and avoid that valley ever after and the ghost dog enters into their superstition.

I’m guessing that London had to have brutal Indians murder his hero, John Thornton, because having him die due to an accident would make him less than super competent to survive in the wilderness. But he could just as easily have had a freak accident befall him, or even, had him go back to civilization, forcing Buck to choose between his friend and the Wild.

This kind of stereotype of the stupid, brutal, unpredictable, superstitious, and cowardly Indian is the epitome of racist depiction. To me it cheapens the whole book, and honestly, the way Buck kept fighting off bigger and more numerous enemies, it was already more like a magazine story than quality fiction.

Obviously I have problems with this book! But what was just as surprising is that I seem to be the only one, as far as Google knows, who had any objection to this scene. I’m surprised that it is given to kids without at least pointing out the racist depiction of Indians, and how, unfortunately, that was part of how people viewed Natives at the time – and how some people still do.

We have to do better than overlooking stereotypes of the Indians as in harmony with nature (Colors of the Wind, anyone?), or cruel, unpredictable, stupid savages, and view Native people, past and present, as fully human, complex as anyone else.