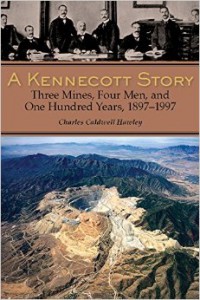 Much of the historic mining legacy in Alaska focuses on the search and development of gold. Although copper, a base metal, may seem less glamorous than gold, its discovery and development played an important role in the early development of Alaska. As the world entered the 20th century, copper proved vital to the industrial revolution and indispensable to electrification for millions of people. The international search for copper included Alaska’s Kennicott Glacier area in the Wrangell Mountains, the namesake of Kennecott Copper Corporation (Kennecott), a mining organization that was destined to become the world’s largest copper company for much of the century.

Charles C. Hawley, who has studied Alaska mining history for more than 50 years, traces the story of three signature copper mines; the Bonanza in the Wrangell Mountains of Alaska; Bingham Canyon in Utah, just southwest of Salt Lake City; and El Teniente in Chile, all of which were to become the cornerstones of Kennecott activities worldwide. The mines became linked to a single corporation, Kennecott, in 1915. The accomplishments of four mining engineers: Stephen Birch, Daniel C. Jackling, William Braden, and E. Tappen Stannard are inextricably linked to the success of the three mines.

Hawley provides detailed analysis of many of Kennecott’s other Alaska activities, which included the Beatson Mine in Prince William Sound, construction and operations of the Copper River and Northwest Railroad (CR&NW), and the creation of the Alaska Steamship Company, the latter two of which provided for transport of goods and services to and from the remote mine sites. These necessary subsidiaries were important early transportation projects for the Alaska Territory; they also provided surface transportation for many Alaskan travelers.

The lives of the miners and their dependents in both Alaska camps are well researched, including working conditions, medical care, educational opportunities (schools), safety concerns, environmental issues of the day, and social and recreational activities that extended well beyond the mine workplace. Hawley describes similar mine and social and economic issues for miners in Utah and Chile.

The political discourse between Kennecott President Stephen Birch and the Guggenheim’s ‘Alaska Syndicate’ (who financed and initially owned the industrial conglomerate) versus congressional delegate James Wickersham is discussed. Right or wrong, attitudes concerning the role of corporate resource development in Alaska that were so actively debated during the Kennecott period would have far reaching consequences that are still felt today.

In the end, the Kennecott copper mines (including company predecessors) in Alaska, which began operations in 1905, finally closed down for good at the end of 1938, but the Bingham Canyon and El Teniente mines in Utah and Chile respectively continued to supply copper for Kennecott. Kennecott was bought out by the London-based RTZ Group in 1997, one of the world’s largest mining conglomerates—thus ending a 100-year legacy put forth by the company’s original founders.

Hawley’s account places the Kennecott story and its principle characters within the broader picture of the American mining industry as it evolved its most critical and revolutionary period. His book is intended not only for geologists (like the reviewer) and engineers but also for historians and the inquisitive general reader. Accounts of numerous failings by many individuals furnish human interest along the way. In addition, Hawley wants the reader to consider controversial issues of mineral discovery, operations, and sustainability in an increasingly crowded world, where resources are not distributed equally.

I know of no book that attempts to do what this book does. This book is a major contribution to the field of mining, mining history, the history of the American west, the history of copper production, and economic history.