May 24, 1894 - St. Michael's Cathedral in Sitka was threatened by a fire that destroyed a nearby building. Valuables were removed from the cathedral and returned the following day. In 1966 the cathedral was destroyed by fire but was subsequently rebuilt.

Canneries and Boatbuilding through the 1920s in Sitka, Alaska

From Russian American times to the present, boats have been built in Sitka because people needed them, and could not afford to buy them; it was not an industry producing boats for selling outside the immediate area. Another factor throughout the centuries, from canoes to aluminum skiffs, is the pure joy of building a boat, and the pride in creating a beautiful, quality vessel. Boat and shipbuilding in Sitka, and the builders and their backgrounds and activities, reflect Sitka’s varied history and economy. While it’s always fun to build a boat, usually you need an economic excuse for it, too.

The Russians of the Russian American Company built at least 27 ships, most of them about the size of large fishing boats today. A few of the ships were fairly large, and included the first steamer built on the west coast of North America.

After Alaska became part of the United States in 1867, American entrepreneurs built sailing ships and boats for fishing, mining, or trading enterprises, but this boatbuilding activity was sporadic, reflecting the varied and unstable economy of that time, mainly trade and prospecting. Once fisheries became a mainstay of Sitka’s economy after the turn of the century, hundreds of boats were built, not only fishing boats but pleasure boats and others. Through the 1920s, 1930s and 1940s there were at least eight boat shops in Sitka at various times. All of the builders did other things as well, like fishing, carpentry, or mining.

The vast majority of boats built in Sitka were fishing boats. These included trollers, seiners, and longliners. The fisheries were segmented largely along ethnic lines. While Natives have always been trollers, most of the troll fleet has historically consisted of men who came here from somewhere else, including many European immigrants in the first half of the 20th century. Longliners in southeastern Alaska were overwhelmingly Scandinavian, based out of Puget Sound.

And salmon seiners, and the men who built the seine boats in Sitka, were Alaska Native. When the fishing tapered off, boatbuilding declined too. In the peak years of Sitka boatbuilding, there was demand for boats, materials were available, and time was cheap, which is not the case today. The decline of wooden boatbuilding in Sitka followed the pattern in the United States generally. Both labor and high-quality old-growth wood have become relatively expensive. Wooden boats are being replaced by fiberglass, aluminum and steel ones.

A major factor in Sitka’s boatbuilding was the canneries, which directly financed many of the boats, as well as employing and buying fish from Alaska Natives. This economic integration, and the status that comes with being a successful fisherman or boatbuilder in a fishing community, might even have been a factor in the development of Native political power.

The following is an account of some of the Native builders through the 1920s. Many more fishing boats were built through the 1950s, but this is an account of the earliest years.Sitka’s first cannery started up in 1878,1 and fishing gradually became an important industry. But it was not until decades later, after the turn of the century, that fishing boats of any size were built here. Records are available of decked vessels of over five net tons, which for a motorized vessel is about a 32-foot-long boat. Very few vessels were recorded as built in Sitka before 1915, but between 1915 and 1930, at least 43 were built here, almost all fishing boats.2  A total of 20 of these larger boats were documented in the three years between 1917 and 1919. It was around this time that gasoline engines revolutionized the process of seining (pulling a net round a school of fish). 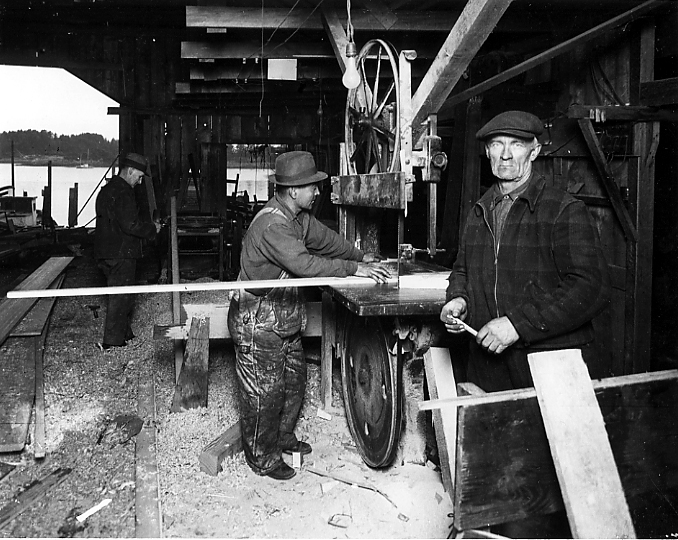 By 1889 there were already 13 canneries in southeastern Alaska, including one near Sitka, at Redoubt.3  But the early seining (catching fish with a net, towed around a school of fish) was done with large rowboats, which apparently were supplied by the canneries, and the fish were carried on steamers to the cannery.

After the turn of the century, however, gas engines were rapidly adopted in the salmon seine fishery.4  Many of the gas seiners used out of Sitka were built here. The earliest seine boats were large flat-bottomed open boats, propelled by oars, and nets were pulled by hand. Engines were introduced on seiners on Puget Sound soon after the turn of the century. According to Herman Kitka Sr., in 1914 Tom Sanders Jr. fished a motorized seiner, the COMET, that had been brought up from Puget Sound,  for Deep Sea Salmon Company. He outfished everybody, and soon all the seiners had engines.

Herman Kitka says that the earliest motorized seiners had loose decks of 2 x 12’s which were picked up to empty the hold. This was not the case for more than a couple of years, because of the problem with rain water and snow in the boat in the winter.5  Many of the seiners built in Sitka over the years were financed by the canneries. Sometimes they were built for the cannery, and sometimes they were built for an individual fisherman, who would help build the boat. The canneries had boats built for good producers, obligating the fisherman to fish for that cannery to repay the debt. Some fishermen would eventually buy their boats, but others fished on cannery boats indefinitely.

In the 20th century there were canneries (with various names and owners) in Sitka itself  (Pyramid), at Sitkoh Bay (George T. Myers, Chatham) and Lindenberg Head (Todd) in Peril Strait, and at Ford Arm (Deep Sea Salmon Company) on the west side of Chichagof Island. The late Herman Kitka, Sr., a Tlingit boatbuilder and fisherman, said that his father, Frank Kitka, built the NECKERBAY, documented 1915, for John Young; OLYMPIC, 1918, for himself; ZINGO, 1918, for John Joseph, financed by the Deep Sea Salmon Company; BUSY BEE, 1919, for George T. Myers (cannery); and the ATLAS, his last boat, for himself in 1920, documented 1922. He also built the PTARMIGAN and the DIXIE, which may have been too small to document. He first built in a shop at the old Brady sawmill, near the present Thomsen Harbor. When that building collapsed, he built boats in a shop on Charcoal Island, which had machinery powered by a gas engine. That shop was on the beach below the site of the current Shee Atika Business Center Building, and burned down before the military took over the island.

This same shop was used by Hoonah boatbuilder Johnny Lawson, to build the PERSEVEARANCE, documented in 1927, and the O.K., documented in 1929.6 Frank Kitka built his last boat, the ATLAS, in 1920, on Katlian Street. Both the ATLAS and the earlier boat OLYMPIC were built for himself, because his main occupation was as a fisherman.7

Another Tlingit builder, George Howard, in 1912 or 1914 built his own shop and house on Katlian Street, on the town side of what is now the Seafood Producers Cooperative plant.8   The earlier shop was much smaller than the one which replaced it in 1940, and was only big enough to build the hull of the boat and not the superstructure.9  The house and shop were torn down in the summer of 1990.George Howard probably built the ACTIVE, documented in 1917, for himself and his sons, and he built the U & I, documented 1919.

Every summer the Howards closed up shop and went fishing. George Howard built the large seiner PROGRESS, documented in 1923, for himself, his sons, and son-in-law Andrew Hope.10 Herman Kitka Sr. said that Peter Simpson, who was Tsimshian and who lived and worked at the Cottages, built the DREADNAUGHT, 1915, for Myers Cannery, for Jimmy Keunz; the ALBATROSS, 1917, for John Cameron, another resident of the Cottages; the BARANOFF, 1918, for Ralph Young, of the Cottages; the EAGLE, 1919 for Pyramid Packing Company; the MARY WARD, 1919, for Deep Sea Packing Company for George Ward; and the KATHARINE, 1919, for Deep Sea.11

The Cottages was a model Christian community for Alaska Natives on the Presbyterian mission school grounds. It is adjacent to the Sitka National Historical Park, and Simpson’s boat shop was on the small point of land where Merrill Rock is today. Simpson is said to have built the MOONLIGHT, 1918, although the documentation lists her owner, Edward Grant, as the builder. Grant fished the boat into the 1940s, when he was killed aboard the boat when his neck scarf caught in the exposed engine. It was beached on Graveyard Island at Hoonah, until bought by a troller, Pete Moe.12  The MOONLIGHT is still fishing; the boat was completely rebuilt in 1979. By that time she was in rough shape from lack of maintenance from a series of owners. Her present owner says that before the rebuild the boat was unusually lightly built, with widely spaced frames, and no floors, the pieces which join the pairs of ribs.13  This might indicate the speed with which these boats were built, although it may be a characteristic only of this particular boat.

Peter Simpson built the troller SMILES, documented in 1920.14  According to the 1920 census, Cottages residents Raymond James and Simpson’s son Louis Simpson were building boats with Simpson.15  He also advertised in 1925: “NOTICE Order your trolling boats from the Simpson Shop, Peter Simpson.”16  But in 1922, 1923, and 1924, he is only mentioned as a sealer (one of the most successful), and fisherman in the newspaper, and he also advertised his boat, the ALCO, for hire.17   He could have been building trollers, which at that time were too small to require federal documentation. Boatbuilder Louis Simpson, Peter Simpson’s son, died at the age of 40 in 1936 in a flu epidemic, of pneumonia.18

The NEPTUNE was built for and to some extent by “Cap” Pavloff, behind where the Wells Fargo bank is now. Pavlof used the boat for fishing and for running to his homeplace of Kodiak or beyond. Pavlof had been a captain of trading vessels in Alaska.20  Hope built the ADMIRALTY for George James of Angoon. This boat was a copy of another Angoon boat, the seiner U & I, maybe the boat George Howard built in 1919, although there were two boats with that name.21

Herman Kitka said that even in the early days, most builders used Douglas fir, shipped on the steamers from Seattle air-dried, and that not too many builders cut their own wood.22   This was apparently most often the case with the cannery financed boats. For political and economic reasons the sawmill industry has never thrived here. For a long time after the purchase of Alaska cutting wood commercially on government land was not legal, and then when it was legal,  the law was hazy and export from the state was still illegal.23  In some years there was no operating sawmill in Sitka. By contrast, the logging industry in Washington and Oregon was large, competitive, and organized. Even today Douglas fir, from Washington and Oregon, is readily available, while lumber from local trees is very difficult to obtain.

So a fisherman building his own boat might take the time to cut and mill his own lumber, but if money was available – as was the case with cannery financing – it was easier to buy wood from south. The fisheries and the canneries declined after World War II, for many reasons, and very few boats were built after the mid 1950s. But for a while, you could walk down Front Street, in Sitka’s Indian Village, and hear craftsmen using the Tlingit language, as they ran machinery and caulked seams. Mingled with the familiar aroma of the tides and fish, you might catch the scent of Douglas fir and oak and yellow cedar shavings. We can only imagine.