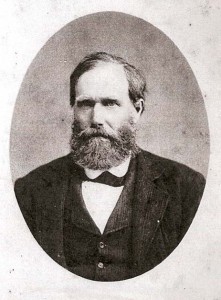 Captain Matthew Turner is best known as the most prolific shipbuilder on the western coast with some 240 vessels to his name from racing yachts to merchant cargo vessels. In addition to introducing Pacific cod to San Francisco, Turner also pioneered the south seas fruit trade and supplied the J. D. Spreckles sugar company with ships. (Unknown photography studio, San Francisco, CA. ca 1878.)

San Francisco had grown quickly from a sleepy hamlet into a thriving commercial center after the discovery of gold in central California in 1848. Many of those who migrated to California during the famed gold rush were of western European, often Catholic, ancestry. For them, salted codfish was a dietary staple. East Coast merchants early on began supplying California with salted Atlantic codfish shipped via the Isthmus of Panama or Cape Horn. The volume grew to be considerable: A total of about 1,000 tons of salted Atlantic cod were imported into San Francisco during the years 1863 and 1864.[1] The cod fishery that developed in Alaska began as an effort to tap into the growing California market.

Captain Mathew Turner was a man of diverse talents: shipwright, gold prospector, and businessman. He was also the pioneer of the U.S. Pacific cod industry. It was not as a professional fisherman but as an enterprising merchant that he explored the northern fishing grounds. In 1857, Turner sailed the 120-ton brig TIMANDRA from San Francisco, carrying an assortment of cargo for the Russian port of Nicolaevsk, on the Amur River, which flows into the Okhotsk Sea. It was early in the navigation season, and Turner was detained for three weeks at Castor Bay, waiting for ice to go out of the river. During the wait, the TIMANDRA’s crew, as a pastime, began fishing over the vessel’s rail. They were surprised at the abundance of codfish, which averaged about two feet in length. Captain Turner himself had never previously seen codfish, but he was aware of their market value in San Francisco.[2] 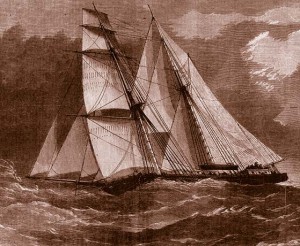 The brigantine WINDWARD shown in this drawing was very similar to the Turner’s TIMANDRA which he purchased at Newburyport in 1857 and brought round to San Francisco. (Illustrated London News, May 1888.)

In 1859, Captain Turner made another trading voyage to the Amur River, and during the voyage he found cod in great abundance near Sakhalin Island. Having no means to preserve the fish, his crew caught only enough for the ship’s use. However, on a similar trading voyage to the Amur River in 1863, the TIMANDRA carried fishing gear and 25 tons of salt. Captain Turner intended to catch and cure some cod on the return voyage. He found fish initially plentiful in the Strait of Tartary, which connects the Sea of Japan with the Okhotsk Sea, and in a few days the crew caught ten tons, which were salted in kenches (wooden bins). Then the fish suddenly disappeared. Turner found codfish again along the Kamchatka Peninsula coast, but during the second day of fishing managed to lose both of his ship’s anchors, compelling him to abandon the fishing effort and to sail for San Francisco. The TIMANDRA’s 30-ton cargo of salted cod—the first ever cargo of salted cod from the Pacific fishing grounds to be landed on the U.S. West Coast—was dried on Yerba Buena Island, in San Francisco Bay, and sold for 14 cents per pound.

In 1864, Captain Turner once again sailed the TIMANDRA to the northern seas, but this time the vessel carried no trading goods; she was outfitted to catch codfish, which made her the first dedicated fishing vessel from a West Coast port to enter the Pacific codfish industry. The voyage was successful: after fishing the same grounds as were fished the previous year, Turner returned to San Francisco with 100 tons of salted codfish, which he sold at a profit.

The year 1863 or 1864—the reports are unclear—marked the first American effort to catch cod in the Bering Sea. During one of those years, the schooner ALERT, of which, according to John Cobb, little was known, journeyed to Bristol Bay, likely primarily to trade with Natives. During the voyage, however, the ALERT prospected for codfish, returning to San Francisco with nine tons of salted cod.This may have seemed like a modest amount, but it represented a catch of perhaps six thousand individual fish.[3]

It is likely that by this time Captain Turner’s crew was fishing not from the deck of the TIMANDRA, but from dories such as were used by cod fishermen on the Atlantic Coast. These dories were about 13 feet long on the bottom and 16 feet on top, and designed so they could be carried to the fishing grounds nested on the deck of the larger vessel.

Each dory was manned by a single fisherman, who daily rowed to his chosen location not far from the anchored mother vessel and fished with one or two baited hand lines. At the end of the day or when the dory was filled, the fishermen rowed back to the mother vessel, where the fish were unloaded, dressed, and salted. When fishing at a site showed signs of slowing—which could be weeks—the mother vessel weighed anchor and moved to another, presumably favorable location, where the fishing routine was repeated.[4]

Captain Turner’s success inspired others, and in 1865 six fishing vessels sailed from San Francisco to the Okhotsk Sea. An industry had been born. All the vessels were small schooners that had been built in New England for the Atlantic fisheries, but had made the journey around Cape Horn to find employment on the Pacific Coast. The vessels’ names and tonnages were: EQUITY (63 tons), FLYING DART (94 tons), R. L. RUGGLES (75 tons), J. D. SANBORN (71 tons), MARY CLEVELAND (91 tons), and TACCON (20 tons).

Captain Turner himself chose to look for codfish closer to home. In late March 1865, he sailed for Alaska on the 45-ton schooner PORPOISE and arrived at the Shumagin Islands, off the southern shore of the Alaska Peninsula, on May 1. Fishing was good, but, in anticipation of a glutted market when the Okhotsk Sea fleet returned, Turner sailed for San Francisco before filling his vessel to capacity. The PORPOISE arrived in San Francisco on July 7 with 30 tons of salted cod. It was the first cargo of codfish ever delivered from the Shumagin Islands.[5]

The abundance of cod in the vicinity of the Shumagin Islands became well known, but Thomas McCollam, of the San Francisco-based Thomas W. McCollam & Company (predecessor to the Union Fish Company), was the first person in the codfish industry to perceive the advantages of establishing a shore-based fishing station in the Shumagins. In 1876, McCollam purchased a hunting camp, complete with several buildings and a wharf, at Pirate Cove, a very pretty and well-sheltered harbor at the north end of Popof Island. He converted the camp into Alaska’s first codfish shore station. Originally manned by a company agent and about eight fishermen, it would gradually become the largest and most important codfish station in Alaska.

Once alongside the wharf, a fisherman used a pew to transfer his fish from his dory into a long, slatted (for drainage) low-walled wooden platform located about halfway between the low-tide line and the wharf’s deck. The fisherman then pewed his fish from the platform onto the wharf, while the station agent tallied the catch.

Dinner—the main hot meal of the day—was served at noon, after which the fishermen divided themselves into “gangs” and processed the catch in a “dress house” that was built on the wharf. Once dressed, the fish were trundled in wheelbarrows to a generally long, low building known as a “butt house,” where they were “pickled” in brine-filled wooden tanks, each with a capacity of about 3,000 to 4,000 medium-sized fish. The preserved codfish were accumulated until a transporter (schooner) from San Francisco called to take the catch and resupply the station with salt and other necessities.

The codfish caught near Pirate Cove were reported in 1880 to usually have weighed between eight and twelve pounds, with the largest weighing fifty pounds. Codfish were said to have been present on the nearby banks year round, although “school fish” left in August or September and returned in January or February, with the best fishing usually in the latter month.[6]

Ultimately there were about two dozen shore stations along the southern shore of the Alaska Peninsula. In 1882, the average daily catch for a fisherman in the Shumagin Islands was reported to be about 200 fish, with an exceptional day yielding 500 to 600 fish. During 1880, seven shipments of salted codfish, aggregating 432,000 fish and weighing 1,728,000 pounds, were transported from the Shumagin Islands to San Francisco.[7]

Due a combination of market conditions and the cost of maintaining them, all of the company-owned shore stations were closed during the late 1910s and early 1920s. The stations that remained were small-scale operations that were owned by independent fishermen, and primarily operated in conjunction with other fisheries, such as salting salmon.

Today, the Trident Seafoods plant at Sand Point, in the Shumagin Islands, is capable of processing up to 600,000 pounds of codfish daily.[8]

Second only to pollock, in terms of volume, Pacific cod is the second highest commercial groundfish catch off Alaska.

In celebration of the 152nd anniversary of the U. S. codfishing industry, this blog piece was cobbled together from segments of Jim Mackovjak’s draft history of the codfish industry in Alaska, which Jim hopes to complete by the end of this year.