Editor’s note: This blog post is based on a lengthier article about McKay by Branson that will appear in a future issue of the on-line magazine, Alaska Park Science.

Charles L. McKay was the first biologist to work in the Bristol Bay region of southwest Alaska. McKay was a federal biologist working as a meteorological observer for the U.S. Signal Service and the Smithsonian Institution at Nushagak village, six miles south of present-day Dillingham, between the years 1881 and 1883.

McKay was born in Appleton, Wisconsin in 1855, and from an early age had a pronounced affinity for the natural world, particularly for birds and fish. He was a very good student and graduated from Indiana University in 1881. After graduation he went to Washington, D.C. to work for the U.S. Fish Commission where he came to the attention of Assistant Secretary of the Smithsonian Institution Spencer Baird. McKay was hired by the U.S. Signal Service and the Smithsonian to be observer-collector at Nushagak, Alaska, where he arrived by sailing ship in June 1881. 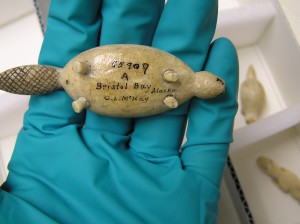 Nushagak had been established near a number of Yup’ik villages by the Russians in 1818- 1819 and was the site of Alexandrovski Redoubt, a Russian-American trading post. The first Russian Orthodox Church in western Alaska was built at Nushagak between the late 1830s and early 1840s. By the early 1880s, Nushagak was the site of the Alaska Commercial Company’s (ACC) trading post serving the entire Bristol Bay region, home to the Russian Orthodox priest, and experiencing the birth of the fledgling commercial salmon industry.

When McKay arrived at Nushagak, John W. Clark was the chief trader for the ACC and would become McKay’s mentor, interpreter and sole English speaking companion for the next two years. McKay lived in a small log cabin next door to Clark’s store.

With the aid of Clark, McKay was able to hire Yup’ik guides and paddlers and travel over a great deal of coastal and interior Bristol Bay region by baidarkas, three-hatch skin boats approximately 27-feet in length. His various trips by baidarka took him from Nushagak along the Bering Sea side of the Alaska Peninsula to Ugashik Bay and later to Iliamna Lake and Lake Clark, a distance of more than 300 miles. In addition, McKay traveled by dog team from Nushagak as far north as the Mulchatna River on collecting trips trading and purchasing ethnological objects, biological and geological specimens for the National Museum (Smithsonian) in Washington, D.C.

In April 1883, soon after the Nushagak Bay ice pack broke up, McKay was returning in a kayak with four Yup’ik men, each in kayaks, from a collecting trip to the Cape Constantine-Igushik area heading toward the east side of Nushagak Bay when a violent snow squall suddenly came up. Bucking fearsome tides, icebergs and strong easterly gale force winds, it was every man for himself. McKay’s inexperience took its inevitable toll. His kayak was cut by floating ice, he could not keep up with his companions and was last seen trying to climb on an iceberg. Even if one of the other kayakers had tried to pick him up, McKay would not have been able to squeeze inside the kayak hatch, nor could he have ridden on top of the kayak to safety, given the storm conditions and the certainty of hypothermia rendering him unable to hold on until reaching shore. 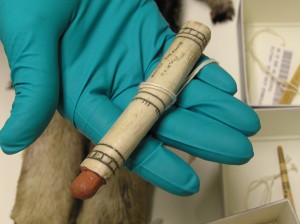 McKay’s untimely death robbed science of a brilliant collector. As is was, McKay left an impressive legacy in the collections, amassing for the Smithsonian Institution approximately 400 bird and mammal specimens and a large number of ethnographic objects such as clothing, tools, weapons and toys created by various Yup’ik, Dena’ina and Sugpiat people of the Bristol Bay region. A bird, McKay’s bunting or McKay’s snowflake (Plectrophenax hyperboreus) was named in honor of Charles L. McKay.