AHS congratulates Damon Stuebner, longtime society member and staff at Alaska Historical Collections in Juneau, on his recent award for chronicling the history of the Coast Guard Cutter STORIS. 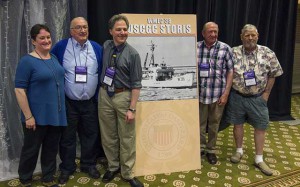 “This film captures the true essence of Coast Guard missions,” one veteran commented. “We used to say, ‘You have to go out, but you don’t have to come back’. You have captured what it means to be a Coastie.”

Commissioned in 1942, STORIS was the only ship built of her design and class. STORIS spent 59 years patrolling Alaska waters where she conducted the first major fisheries law enforcement operations in the Bering Sea. In 1972, STORIS earned the title “The Galloping Ghost of the Alaskan Coast” for the seizure of two Russian factory trawlers illegally fishing off St. Mathew Island.

STORIS also provided relief after the 1964 earthquake, provided icebreaking for the construction of the Trans-Alaska Pipeline, and was one of three command ships for the clean-up of the Exxon Valdez oil spill.

In 1991, STORIS became the oldest commissioned cutter in the U.S. Coast Guard earning it the new title, “Queen of the Fleet”; in 1992, she became the military ship with the longest tour of duty in Alaska, surpassing the Cutter BEAR’s 44 years of service.

STORIS was decommissioned in 2007, in Kodiak, Alaska. 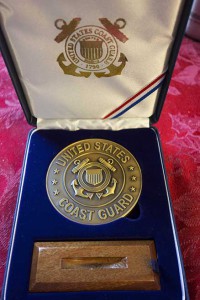 After failed attempts by members of both veterans’ associations and several historical societies to preserve the ship as a museum, STORIS was scrapped in 2013 in Mexico. Another veteran said, “It is a real shame she was not saved for her historical value.”

The inscription on the back of the medallion reads, “Damon Stuebner, thanks for keeping the history of the CGC STORIS alive, 2015.”

The documentary “STORIS: The Galloping Ghost of the Alaskan Coast” is currently under review for numerous film festivals.