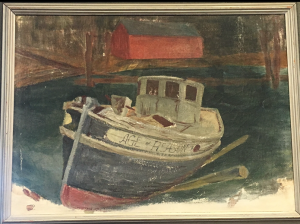 Mary Ida Henrikson of Ketchikan gifted an original painting by former Craig resident and author, Ballard Hadman, to the Craig Public Library. The painting by Ballard was gifted to former Thorne Bay and Ketchikan author and her friend, Margaret Bell (niece of City of Craig founder, Craig Miller). It was Margaret who gave the painting to Mary. When Mary was in Craig in 2018 promoting her new book The Mystery of the Fire Trees of Southeast Alaska, she brought the painting with her from Ketchikan and gave it to the Craig Public Library. Mary mentioned that there is the Ketchikan Pond Reef Road legend surrounding the name on the boat. Some speculate that perhaps Ballard didn’t finish the painting. Henrikson mentions that Margaret Bell told her when Ballard was with Margaret one evening the two were having a glass of wine or a martini and it is said that the name was painted on when they were visiting and possibly under the influence of their drink. Regardless of when the name was put on, it’s exciting that the boat influenced Ballard as much as it did. Ballard writes in her book, As the Sailor Loves the Sea:

My first sight of Fishermen’s Cove gave me a painting, which is peculiarly difficult to put into words but ready-made for canvas. At the head of the cove, heeled over with her forefoot to the beach, abandoned to the endless tide, derelict and rotten, lay what had once been a brave hull. Along her bows in fanciful lettering was her provocative name, the Age of Reason. To be sure, it gave me deep pleasure to find the Age of Reason rotting on the beach.

Someday when you are out of isolation, the painting can be seen  at the Craig Public Library. It hangs to the left of the librarian desk.

Ballard Hadman a resident of Craig and Ketchikan was born Virginia Diana Ballard in 1908 in Laramie, Wyoming. She attended Corcoran Institute of Art in Washington D.C. and the Winold Reiss School of Art in New York City. Ballard arrived in Craig, Alaska in 1937, following her mother, Mimi, to come work with her brothers, John and Charles, on their fishing boat the F/V Diana. It wasn’t long until Ballard put out her memoirs in the Craig town favorite, As The Sailor Loves the Sea. When Ballard arrived in Craig she wrote:

I should always like to land in a strange port on a strange island in the dark; the impact of the morning is so fresh, so wholly new. From the top of the highest hill on the island, where a long bed of iris stood tall and proud, I first saw the polished blue sweep of Big Harbor, the warm deep green of Saint John’s Island with its own infant island, Little Saint John, tucked close to its shoulder.

After arriving in Craig on the steam ship Cordova, Hadman made her way to the fish packer the F/V Lawrence P and caught a ride out to “Hole in the Wall.” Once there, Hadman met up with her brothers who unloaded her onto the beach and set her up in a rustic cabin until they went out fishing. (Remnants of the cabin can be seen on the northern end of San Lorenzo island.)

Hadman’s book has many unique hand-drawn and painted scenes of the outer coast, fishing boats and locals such as “Shorty,” Many local historians consider her book a “must have” whether on their boat, in their remote cabin, or on their shelves in Craig. Her book can be found at the Craig Public Library, as well.

Ballard became infatuated with the beauty of the fishing landscape and enjoyed painting scenes that can be found in her book. Her most noted love is the painting of Cape Addington. Hadman writes: “It was that first season that I began to know Cape Addington, my first and best love among all the seaward capes. …To my mind, and to John’s as well, the most beautiful cape in Alaska.

Like most women who came to Alaska to seek an adventure, Hadman not only became a proficient fisherwoman, author and artist, but became involved in the community of Craig as a member of the Craig Women’s Club. In 1946, she was honored as a “Woman of Achievement” in Seattle by the honorary journalistic sorority, Theta Sigma Phi.

When I first saw the painting in the Library, I decided to find out about the history of it. I hope you enjoyed reading this as much as I have enjoyed researching and learning about the painting. When researching the boat, I found out before she came to rest at Fishermans cove (South Cove) in Craig she was once considered to be one of the larger boats in Klawock and owned by two fishermen from Klawock: J. Cook and S. Davis. Thanks to Mary Henrikson for her help and for donating the painting back to Craig. I started this research in 2018. This is the first Covid-19 isolation project that I have finished. Kathy Peavey, March 28, 2020.

Tewkesbury’s Who’s Who in Alaska

O.M. Salisbury, As the Sailor Loves the Sea