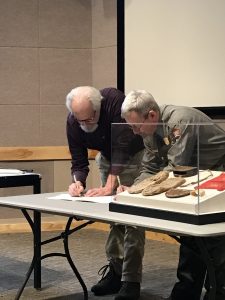 This year, Denali National Park and Preserve is celebrating its 100th anniversary and hosting events throughout the year. During the final week of February, the Park held its annual Winter Fest which coincided with the Park’s centennial on February 26th—the day President Woodrow Wilson signed the Park’s enabling legislation in 1917.

As a part of the celebration, Charles Sheldon’s hunting rifle was donated to the Park, in person, by his grandson, Charlie Sheldon. The donated rifle was the only one Charles Sheldon used during his time in Alaska in the early 20th century. Representatives of the Governor’s office, Senator Lisa Murkowski’s office, and members of the Boone & Crockett Club were present for the ceremony.

Another highlight of the centennial celebration was an open house at the recently rehabilitated Old Superintendent’s Office at the Park’s Headquarters.  The building was originally constructed in 1926 under the guidance of first Park Superintendent Harry Karstens. Karstens’s great grandson, Ken Karstens, attended the open house and brought mementos of early park history. 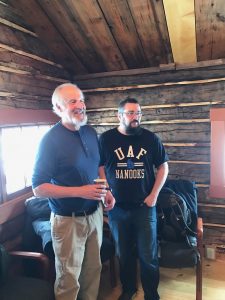 Charles Sheldon spent time studying Dall sheep in the region north of Denali between 1906 and 1908. During this time he was guided by an experienced mail freighter and prospector named Harry Karstens, and the two developed a strong bond. Sheldon wrote about the idea for “Denali National Park” in his 1908 journal and later proposed the idea to the Boone & Crockett Club (an elite hunting and conservation group started by Theodore Roosevelt and others in the late 19th century, of which Sheldon was a member).

When the Alaska Railroad began laying track in 1915, Sheldon and other conservationists became alarmed about the threat to wildlife north of the Alaska Range, and were spurred into action. The legislation creating a national park was introduced in 1916 and passed Congress in February of 1917. Once the Park finally received an appropriation in 1921, Karstens was hired as first Superintendent, based on Sheldon’s recommendation.

The names Sheldon and Karstens have been inextricably linked to the Park’s establishment. The recent centennial celebration was an extraordinary occasion because it brought together the descendants of two of the most historically significant individuals in the Park’s history for the first time.