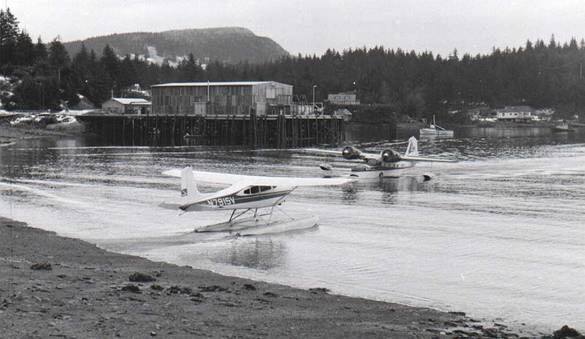 We were never supposed to live in Ouzinkie.

That revelation from my mom blew my mind. We had never been one of those families that had meetings to discuss things, but I always assumed at least my mom knew what was happening. As it turns out, not so much.

I’d wondered why we left our two wonderful dogs, Missy and Gazebo, at our home in Anchorage under the care of neighbors when we moved to Ouzinkie in 1972. Turns out, Mom thought we were just going for a visit, maybe a few weeks, maybe a month. Just to see my dad, who was over there — wherever “there” was — getting a shrimp processing plant running. 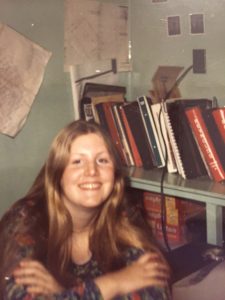 Susan Morgan in the cannery office, 1973.

It took me 40-some years to learn that the same things that surprised me about Ouzinkie also surprised her.

For example, like me, Mom wasn’t thrilled that my brother and I had to sleep in the cannery’s brightly lit office at the far end of the dock over the water that first summer. There simply was nowhere else. And she definitely wasn’t happy to learn that the tiny pink trailer at the other end of the dock where she was supposed to stay with my dad was also occupied by the cannery’s then-foreman.

But probably the biggest shock for Mom was that once we were there for our “visit,” my dad gave no indication he wanted us to go home to Anchorage. Unbeknownst to her, at least at first, “home” was now here, where my dad was, in this village of fewer than 200 people. When Mom finally figured that out, she made a fast trip to Anchorage to gather more clothes and give away our long-suffering dogs.

Over time, those three years in Ouzinkie proved to be life-changing for every one of us.

My mom and dad built a business that, for a while at least, thrived beyond anything they’d imagined. Mom says a “ton of money” went through that plant, as endless boatloads of raw shrimp were caught, processed and sold to our eager market in Great Britain. 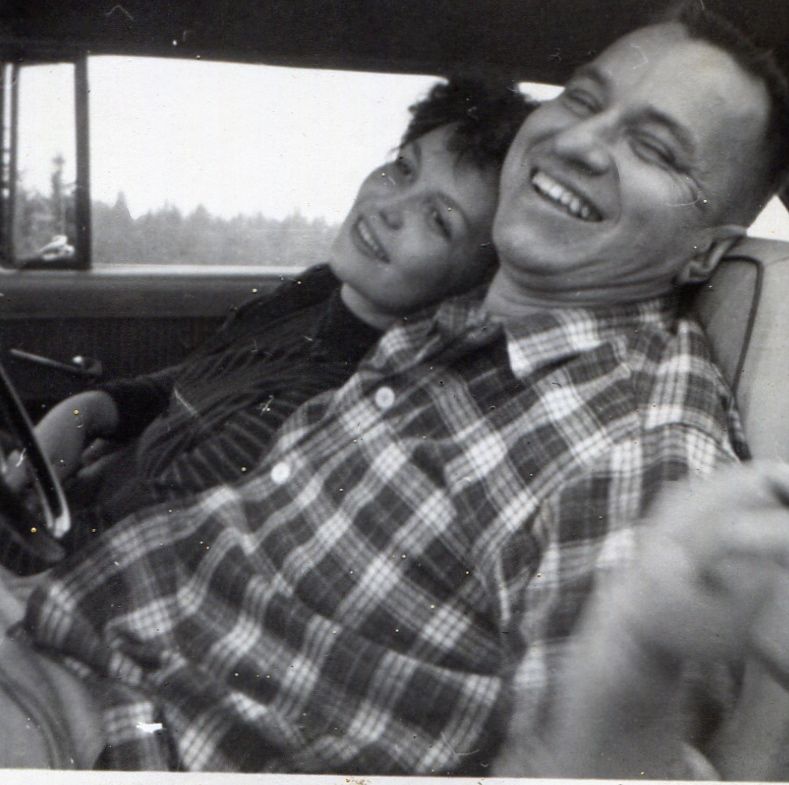 My mom and stepdad, Donna and George Grant, pre-cannery.

Unlike their prior seafood ventures, my parents even walked away with a small profit at the end. When their partner bought out their share after they were too exhausted to keep the plant open any longer, they enjoyed a rare taste of financial comfort. Daddy told Mom to design her dream kitchen and they’d build it. She still loves those walnut cabinets.

Those years influenced my younger brother, too, now a renowned professor and scientist who specializes in water quality. He credits time spent in the tidepools and beaches of Ouzinkie, where everything including our cannery waste was dumped in the ocean, for sparking that interest.

And I’ve always referred back to that time for pretty much everything that makes me who I am. I’d grown up a quiet, middle child, and to be plunked into the middle of the wild and crazy world that was Kodiak and environs in the 1970s… well, it was a revelation.

My new friends in the cannery taught me about Kerouac, the joys of communal living, pot, hitchhiking and freedom. I fell in love for the first time and experienced the deaths of people I cared about for the first time. I saw people who watched out for others in ways that went far beyond words. If someone was missing in a storm, they went — without hesitation — into the storm themselves to rescue them.

I loved that. It felt like all the artifice of the world had been stripped away. This was how life was meant to be, I thought: elemental and true. With a hell of a lot of fun thrown in.

My plan for exploring these few years when my family’s cannery operated in Ouzinkie was to discover why I loved it so much, why I remembered it so fondly 40-plus years later. I wanted to find my old friends and coworkers and learn if that place, that time, affected them as much as it did me.

But the biggest surprise for me in this whole enterprise was how much I learned and realized about my parents.

I was a teenager when we lived in Ouzinkie, and like most teenagers, I found my parents occasionally embarrassing. I especially hated it when they’d sometimes stroll through the processing plant, arm in arm, while my friends and I worked on the fish pick line. It seemed so … parental!

But in looking back, I can see now how those strolls must have felt to them.

This building where dozens of us worked, sometimes in shifts around the clock, had been empty when they bought it. They had taken nothing, a cavernous structure, and by their wits and creativity and with very little financial backing, had created this bustling plant. Villagers, college students, boat crews and more made a good living because of my parents’ creation. 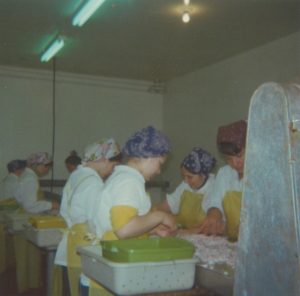 And the shrimp was fantastic. I don’t eat it anymore — being drenched in the stuff for three years will do that to a person — but even I know it was extraordinary. Forty years later, people I talked to remembered how great it tasted, cooked just right in pristine sea water, peeled perfectly by intricate adjustments to the giant array of peelers, and how it was then cunningly frozen in mid-air so every shrimp stayed fresh and separate.

It was a thing of which they were rightly proud. I wish I’d realized that at the time.

My mom believed things were coming to a crisis point for us when we left Ouzinkie.

While most people there had been wonderful and welcoming when we arrived, one or two had been actively hostile. Mom suspects it was because the cannery building had previously been owned by the village, but had, we were told, been lost to bankruptcy.

She and my dad, possibly seen as interlopers by some, had even been personally threatened; someone would get drunk, wave a weapon around, and vow to come down to the dock and “wipe them” — us — out.

Plus, getting anywhere off the island involved flying in often iffy weather, and never mind the hazards faced daily by our boats, navigating the most treacherous waters in the world to feed our insatiable need for more shrimp. Living with worries like that can take a toll. It did on my folks.

I’ve never been able to go back to Ouzinkie since then. Even photos of the charred remnants of the dock right after the fire – looking for all the world like the skeleton of a giant whale – breaks my heart. 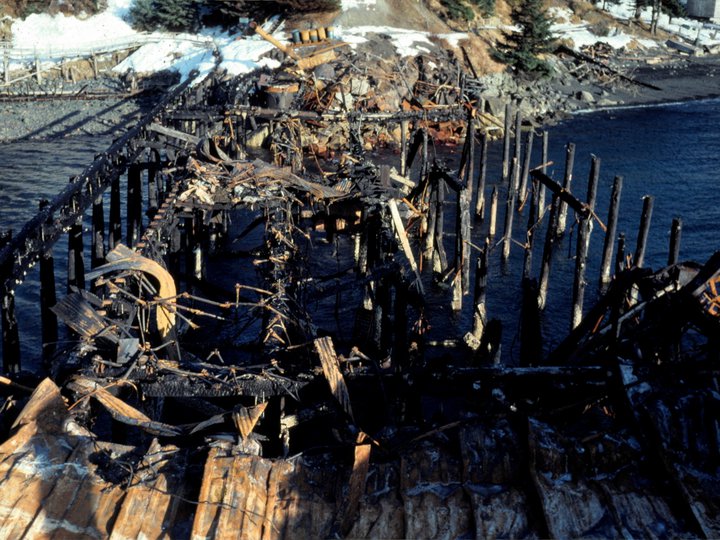 Glacier Bay Seafoods dock in Ouzinkie after the fire that destroyed it, 1975. Photo by Warren Good

But in a way, that violent and final ending to our cannery is in keeping with the lessons I learned there.

We had no buffers in Ouzinkie. We and everyone else lived and died, truly, with nature.

When I interviewed Tim Southworth for this project, he said his time working in Ouzinkie taught him where “the edge” was. While he learned he wasn’t constitutionally equipped to live on the edge forever, he said it informed his life to know where it was.

I think that’s been true for all of us.

Like many others in Ouzinkie at that time, I was fortunate to live — and survive — a few years very close to the edge. It was heady, exhilarating, terrifying and unforgettable.

At 22, I made a conscious, deliberate choice to step back from that edge. It was the right decision and I don’t regret it. But part of me still longs for the way I felt there, the others I knew there. And to be honest, part of me still misses the view.