Fifteen Nations, Four Labels, and One Boat: A Letter from a Ugashik Cannery Worker in 1928 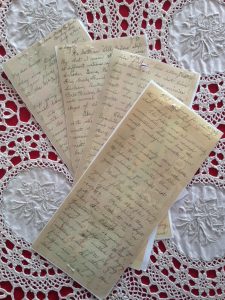 Petersburg resident Karen Hofstad’s salmon can label and tin collection overwhelms. It is so good, it’s difficult to know where to begin once perusing commences. Should we start with the original, handmade tins from the early canneries along the Sacramento River or with the tins from the companies that consolidated to create the Alaska Packers Association in 1893? What about the pound tall labels, or the half pound cans, or the sample booklets of labels that salesmen would tout to store owners? When it comes to cannery ephemera, Karen has likely the largest private collection in Alaska. In fact, I am unaware of a collecting institution in the state that approaches the size and scope of her collection.

One treasure caught my eye and my imagination, one treasure composed of four distinct labels. Strewn on the back of Express, Iceberg, Rocky Point and Comet brands is a letter from S.E. Reed, who converted these Alaska Packers Association labels into stationary. He wrote aboard the Star of Finland on his way back to San Francisco from Bristol Bay at the end of the 1928 salmon season. He had recently left the APA’s <U> Ugashik cannery and still had several weeks ahead of him before he could mail the letter to his “dear Lauree.”

Within the letter on the peculiar paper, Reed recounts his season, which was “wonderful” from the sounds of it, even if there were mishaps. He writes that a fisherman committed suicide on the trip north and severe weather delayed the bark by over two weeks. Yet once he arrived, Reed was clearly enamored with Ugashik, noting that “we had the most wonderful sunsets I ever saw.” He reported on the sled dogs, the mountains, the marvels of the cannery. He mentions the Spanish flu pandemic of 1918-1919, which left many orphans in the region. One 19 year old acquaintance was responsible for caring for three children who no longer had parents.

The boat on which he sailed had “15 different nations represented.” 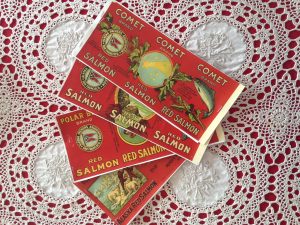 The labels on which the letter is written.

But he doesn’t speak much of the ship herself. The Star of Finland was constructed in 1899 and christened as Kaiulani. She was built in Bath, Maine and renamed when the Alaska Packers Association purchased her in 1910. She was the largest 3-masted bark ever constructed in the United States.

Although the vessel was comparatively spacious, she was likely crammed on the return trip. If protocol had been followed, the vessel would have been carrying part or all of the 2,000,000 cans of salmon that Reed reports were made at Ugashik that season. Those cans were baring the labels on which Reed wrote his letter.

The letter doesn’t help to solve any mysteries regarding the history of Alaska’s canneries, but it does provide a compelling and brief synopsis of one worker’s fishing season, his perceptions and his prejudices. Read all about Reed’s experience in Ugashik in the transcription of the letter, below, and listen to the story aired about the letter on the Alaska Fisheries Report.

Eight months ago today since I walked from Denny’s to your place, not being wanted at the McGaffic wedding.

I had quite a trip going home and wish you could have been with me as I did not arrive in Frisco until April 19 and left on the 28th for the salmon cannery at Ugashik, Alaska on a sailing vessel, and we are now on the same vessel returning home.

On May 10th we encountered a severe storm which carried away some of our sails and then we were bothered by head winds, so that we were 45 days in making the trip, which should have taken about 30 days. 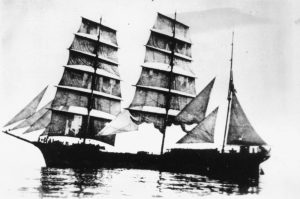 Star of Finland, from State Library of Queensland collection.

Imagine 45 days without a bath. It makes me scratch to think of it. And only enough water to wash your face about once a day.

About midnight on May 19th, one of the Sicilian fishermen went crazy and cried for the remainder of the night. The next day he appeared rational but seemed to think that some one was going to kill him and asked permission to sleep in the donkey engine room which was given and the next morning they found that he had slept in the firebox of the donkey engine in a space so small that he had to curl up like a dog.

He did this for several nights and one morning he refused to come out and his fishing boss attempted to pull him out, he shot him and then committed suicide and was buried at sea the next day and the injured man was removed by revenue cutter a few days later and was soon back on the job.

There was nothing at Ugashik except the canner and about 50 natives who live there, several white men married to natives, Siwash Indians, which made them squaw men and innumerable dogs. I wish you could have seen the dogs, great big ones, regular Eskimo dogs. They hitch 7 to 9 of them up to make a team and they are quite a sight. I almost forgot the Eskimo family who spend the summer there and have a reindeer herd in the winter time. 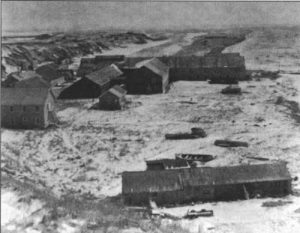 Ugashik cannery in the 930s, from NPS.

The machinery for cleaning the fish and canning it were also wonderful to me.

They place was almost entirely surrounded by  snow covered mountains and we had the most wonderful sunsets I ever saw.

We were only there a little over seven weeks and I rather hated to leave. I would like to spend a winter there and should I go back next year, may do so.

Most of the natives are young folks the elders having all died with the flu in 1918-1919. Poor kids, they got very little to eat except when the cannery is in operation. There was one young fellow 19 years of age, who was supporting three children and instead of buying needless Xmas gifts for my friends in the states, I helped him by buying the kids some clothes.

Tell your Mother that I had a nice visit with Mrs. Bradshaw in Los Angeles and am writing her today also, and also spend a night with John Bradshaw’s son.

Nothing preventing we should reach home early in September at which time this letter will be mailed and I would appreciate an early answer as I do not know how long I will be in Frisco.

Hope you did not have to work very hard this summer and that everyone is well.

With kindest regards to all, I am- Sincerely, S.E. Reed- 220 Golden gate Ave., San Francisco, Calif.

P.S. How do you like this stationary. Just samples of the labels used on some of the salmon.”