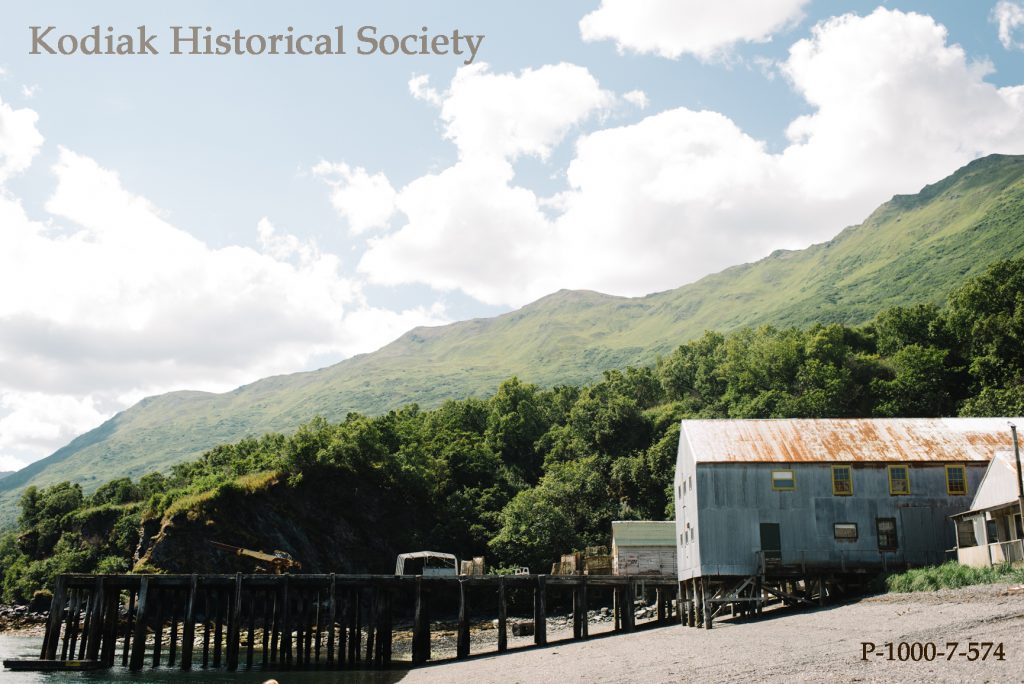 Parks Cannery, now the Spirit of Alaska Wilderness Lodge, photographed in the summer of 2015 for the West Side Stories project. Photo by Breanna Peterson.

The important work of documenting cannery history became clearly- and tragically- evident last week when an early morning fire broke out at the Parks Cannery in Uyak Bay on the west side of Kodiak Island. One person was killed and three were injured in the fire, which appears to have not spread beyond the primary lodge building used by the Spirit of Alaska Wilderness Lodge, the business that now occupies the site. The F/V Alaskan ferried the injured to Larsen Bay to reconnoiter with the Coast Guard while other boats in the vicinity joined the bucket brigade which prevented the spread of the fire to the rest of the compact cannery complex of bunkhouses, warehouses, and other buildings that typify historic cannery operations.

Just the week before, the Baranov Museum/ Kodiak Historical Society opened its exhibit, West Side Stories, which was the culmination of an Alaska Historic Canneries Initiative grant-supported public history project. For West Side Stories, we endeavored to document the history and culture of Kodiak’s west side through oral histories, photography, and art and to share that history through radio, film, and an exhibit. We were motivated due to the knowledge that the poorly documented history of this sparsely-populated region was endangered. The fire at Parks Cannery really brought this point home. 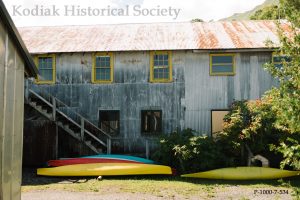 Photographer Breanna Peterson and I traveled to Parks last summer. Breanna snapped photos of the cannery, which last processed fish in 1983. Spirit of Alaska Wilderness Lodge owner Steel Davis sent the museum post cards over the summer, including a recipe for gourmet smores which is a favorite with guests. I conducted oral histories with Uyak Bay fishermen connected to Parks, from those who sold fish to the plant (last operated by Whitney-Fidalgo), to those who lived there as winter watchmen.

During the course of the interviews, it was easy to hear that this place matters to those of Uyak Bay. Although it has not processed fish for over 30 years, those buildings hold memories and serve as a physical connection to individuals who lived or worked there and have long since passed away.

For example, Weston Fields and his family started selling fish from their setnet operation to Parks in 1965. Previously, the family sold fish to the Alaska Packers Association, but they switched markets for one reason— the power of personality. As Weston explained in the oral history,

“Mr. Parks himself… hired a guy named Frank McConaghy who was really famous in those days. He had run Halferty’s in Kodiak for years. He was the one that had the Pioneer Clams that were done there from Swishak.  He had had a cannery in Kanatak. A famous guy…He was charismatic, friendly, he knew how to treat people. People who fished for him always got a turkey for Thanksgiving and a ham for Christmas. That sort of thing, really small, but the right kind of public relations. So he came along to my dad before the ’65 season and he said, “You know, I’m going to be superintendent, I’m going to start it up, and I would like you to fish for him.” There was no question (laughter). And so then he was there a year or two and then someone took over as superintendent… He had a certain style. He always wore these hats from the ‘40s or ’30s, you know, and he was always had a tie on down at the cannery. He was sort of more heavy weight kind of guy but just always smiling and cheerful. He was educated. He was well-spoken. He knew everybody’s name. He treated everybody the same as everybody else. You were important to him. Even as a child I felt that I was important to him. […] That’s why he could start up Parks. Just as simple as that. Personality.”

For another West Side Stories interview subject, Virginia Abston, the Parks Cannery was more than a place of work, it was her home. In fact, she was born in the village of Karluk only because there wasn’t a midwife at Parks. Her parents lived there year-round; her father was a carpenter and her mother worked in the laundry. Virginia even met her husband there, and together they too worked as winter watchmen. Here you can see and hear more of Virginia’s story and other photos of Parks:

The fire, injuries, and death at Parks Cannery have shocked and deeply saddened residents and seafood industry folks in Uyak Bay. Those of us who worked on the West Side Stories project are grateful for the support of the Alaska Historical Society and other project partners for helping us to document and record the history of the seafood industry- a history that remains vulnerable across Alaska.

Anjuli Grantham directed the West Side Stories project when she was Curator of Collections and Exhibits at the Baranov Museum in Kodiak.