In April, 2014, the Alaska Mining Hall of Fame Foundation (AMHF) inducted Peter Petrovich Doroshin into its organization during a ceremony held at the foundation’s museum in Fairbanks. To many familiar with the late Russian-American period, Doroshin is credited with finding the first, albeit small, concentrations of placer gold on the Kenai Peninsula in 1848, but he was never able to develop a commercial scale mining operation. Some historians have thus concluded that the Russian mining engineer failed in his attempt to diversify the economy of the far-flung Russian colony in North America.

Doroshin’s activities in Russian America were far more comprehensive than just prospecting for placer gold. During his five-year assignment with the Russian America Company, the bright, energetic mining engineer secured structural-quality stone for improvements to building foundations in Sitka and Kodiak and located high-quality marble for ornamental stone applications. He provided detailed analysis of coal resources through coastal regions of Alaska from Southeast to north of Kotzebue. This work eventually led to the brief development of a coal mine at Port Graham on the Kenai Peninsula, which operated at a small scale from 1857 to about 1861. He oversaw mineral exploration north of Cook Inlet and in the Yakataga area, using information provided by native prospectors. While conducting extensive field examinations of Alaska’s geology, Doroshin secured some of the first fossils ever collected in Alaska, and shipped the collections to museums in Europe. He provided some of the first descriptions of the elusive but highly profitable ‘ice-mining’ ventures near Sitka and Kodiak, which provided ice for food preservation applications in the gold rush boom town of San Francisco. Details of Doroshin’s activities in Russian America are documented in a series of his articles in Russian Mining Journa’ in 1866.

Upon his return to Russia in 1854, Peter Doroshin would serve with distinction in the Crimean War, and, later, successfully developed coal and gold mines in Russia. He eventually served as the chief of the Russian Naval Mining Office, an institution that required his talents to help locate and design new harbors, determine sites for coastal light houses, provide navigation charts, and identify locations of energy resources, mainly coal, to fuel a growing naval fleet. Prior to his death in 1875, Doroshin achieved the rank of Acting State Councilor, approximately equivalent to a rank of a regional governor in the Russian Imperial system. 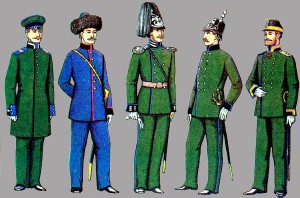 Uniforms of the Corps of Russian Mining Engineers as they appeared in 1855. The uniform in the center is the rank of a junior officer; i.e., a lieutenant, which is the rank held by Doroshin during his work in Alaska. From Russian Mining Museum collection, St. Petersburg, Russia.

Russian researchers discovered Doroshin’s biography on the AMHF website (www.alaskamininghalloffame.org), and contacted the writer. An annual conference entitled The Ural Mineralogical School Resource Conference, was organized in Ekaterinburg, a large Russian city in the southern Ural Mountains. This conference, which took place on September 22-26, 2014, was organized by the Russian Academy of Sciences and the Ural State Mining University. Several conference themes were addressed, including natural resource management, mineralogical studies, and the history of Russian geology. Because of the interest generated by Peter Doroshin’s induction into the AMHF, a paper and poster was assembled by Vladimir and Evgeny Sphikerman of the St. Petersburg Mining Institute in St. Petersburg, Russia that discussed Doroshin’s activities both in Russian America and in European Russia. The poster was presented in the Russian language, but features Doroshin’s biography as published in English on the AMHF website. The relevance to featuring Doroshin at the Ekaterinburg conference was that he conducted pioneering work on lode gold mining projects and mineralogical studies in the Ural Mountains both before and after his involvement with the Russian America Company.

Despite his visibility, neither the AMHF nor the Russian researchers in St. Petersburg have been able to find a suitable photo or portrait of Peter Doroshin. A search for an image of Doroshin in archived files stored at several Ekaterinburg museums will be initiated. 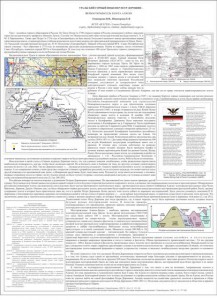 Poster honoring the Russian American mining pioneer Peter P. Doroshin, as recently given at the conference The Ural Mineralogical School Resource Conference held in Ekaterinburg, Russia, September 22-26, 2014. The part of the poster in English is from the Alaska Mining Hall of Fame Foundation website.