The recent monograph by historian Ryan Jones entitled Empire of Extinction: Russians and the North Pacific’s Strange Beasts of the Sea, 1741-1867 is a valuable study of the Russian sea otter trade of the eighteenth and nineteenth centuries.[1] Not the least of the book’s contributions to fur trade scholarship is its appendix. Jones provides a list of hunting expeditions in the North Pacific, from Vitus Bering’s fateful mission in 1741 to 1800. As he explains, such lists (based on scattered and incomplete shipping records) have appeared in previous works on Russian America. Yet according to Jones, greater use of the data will allow scholars to more accurately reflect the environmental dynamics of sea otter hunting in Alaska and the North Pacific.

Calling into question the assertion that the Aleutian Islands were not overhunted by the Russians during their tenure there, Jones’s list demonstrates a steady and increasing slaughter of sea otters over the course of the 1700s, as Russian promyshlenniki ventured east, encountered new island groups, and pressured indigenous people to kill the animals. I decided to graph his data on sea otter catches in a manner similar to how I and others have graphed records relating to the California otter trade.[2] A comparison of the Russian hunt with the California data illuminates a number of important realities. The high point in the California sea otter trade was reached in its second “full decade” (1801-1809) when 22,578 otters skins were transported from Spanish shores, or 45.18% of the total exported skins. After that period, the numbers dropped off steadily and never recovered. This peak was due in large part to Russian and American contract ventures that brought skilled Aleut hunters south to poach sea otters in Spanish California, the same native peoples employed by Russian masters to decimate the creatures along shores farther north. By the 1810s these contract voyages ceased, yet the environmental damage left in their wake was striking, especially when one considers that sea otters were historically more abundant in Alaska and the North Pacific than in California. With fewer otters to start with, California quickly ran low on the species. 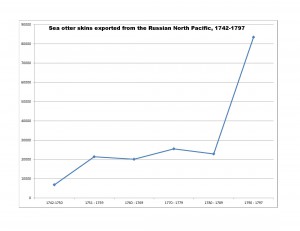 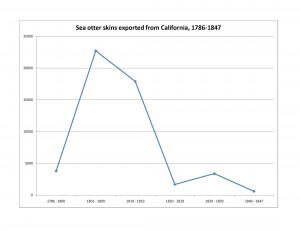 The graph of Jones’s data not only confirms the Alaskan sea otter’s abundance, but is further evidence that Aleuts and Russians were a deadly combination for Enhydra lutris. Hunters reached “California peak” levels above 20,000 sea otter skins and never dipped below that threshold for the remainder of the 18th century. The lowest decade after mid-century, 1760-1769, produced 20,099 skins. A substantial spike in the 1790s is the result of a decade-long take by the Shelikov-Golikov Company that resulted in 64,000 skins, according to Jones’s chart. Such a slaughter punctuated a dramatic 50-year decline of the sea otter that Russian authorities only began to take seriously by the end of the 18th century. In the early 1800s, conservation measures meant to undo some of this environmental damage in the North Pacific were put in place. (I hope to compare the Russian efforts with those undertaken by officials in Mexican California to regulate the sea otter hunt in a future blog.) Prior to then, the Siberian proverb that “God is high above, and the tsar is far away” appears to have been the prevailing attitude—at least that’s what the numbers say.