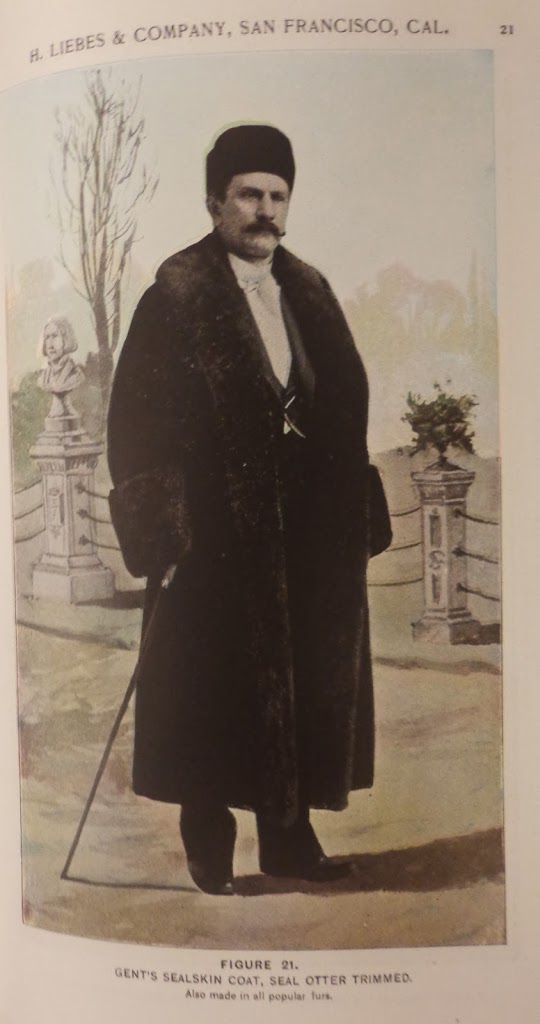 This image of a sealskin coat with sea otter trim was included in an 1893-1894 season catalog of H. Liebes and Company.  It depicts a time when the San Francisco-based furrier founded by German-Jewish immigrant Herman Liebes was expanding its influence in the Pacific fur trade.  Conversely, it was also a time when sea otters were beginning to disappear from Pacific waters.  Decades of hunting facilitated by American trade ships after the Alaska Purchase of 1867 had brought the species to its environmental nadir, and entrepreneurs like Liebes played a distinct role in that process.  Advertisements for garments with sea otter fur were therefore on the verge of becoming as extinct as the animals themselves.  A few years after the H. Liebes catalog was published, sea otters finally began to receive more attention from governmental authorities and Herman Liebes himself passed away, an epilogue symbolic of the real connections between the man and the sea mammals he pursued.
Liebes was born around 1842 and worked in the London fur industry before immigrating to New York during the Civil War.  By 1864 he was in San Francisco where he eventually established H. Liebes and Company with partner Charles J. Behlow.  Herman’s English cousin Isaac joined them in 1869. [1] In a short amount of time the company rose to prominence in the San Francisco fur trade.  The purchase of Alaska from Russia by the United States dramatically increased the flow of Pacific pelts to the city, especially following the formation of the Alaska Commercial Company in 1868, a consortium of businessmen that also included prominent German-Jewish immigrants in San Francisco.  Two years later, the ACC was awarded a lucrative government lease to manage the fur seal rookeries of the Pribilof Islands in the Bering Sea for twenty years. [2] While more research is needed on the question, it is possible that many of the firm’s Alaskan fur seal and sea otter pelts were purchased and processed by H. Liebes around this time.
Despite the important role played by the ACC in the Pacific fur trade, San Francisco furriers in the late 19th century ultimately benefited from a variety of commercial vessels that plied the ocean for sea mammals, including some of their own ships.  Past sources on H. Liebes have suggested that the company did not engage in direct trading with the natives of the Aleutian Islands until 1887. [3] In actuality, it was in that year that one trader specified that H. Liebes “has been engaged in dealing and bartering for furs on the Aleutian chain for ten years or more last past.  They have had several vessels on the coast every year carrying up supplies and carrying back peltries.” [4] A document from earlier in the decade claimed that the company had “8 small vessels hunting seals and trading for furs in northern waters. [5] While sea otter skins came to San Francisco from throughout the Pacific in this era, it was these Alaskan trading ventures in particular that supplied the raw material for the city’s otter fur industry. 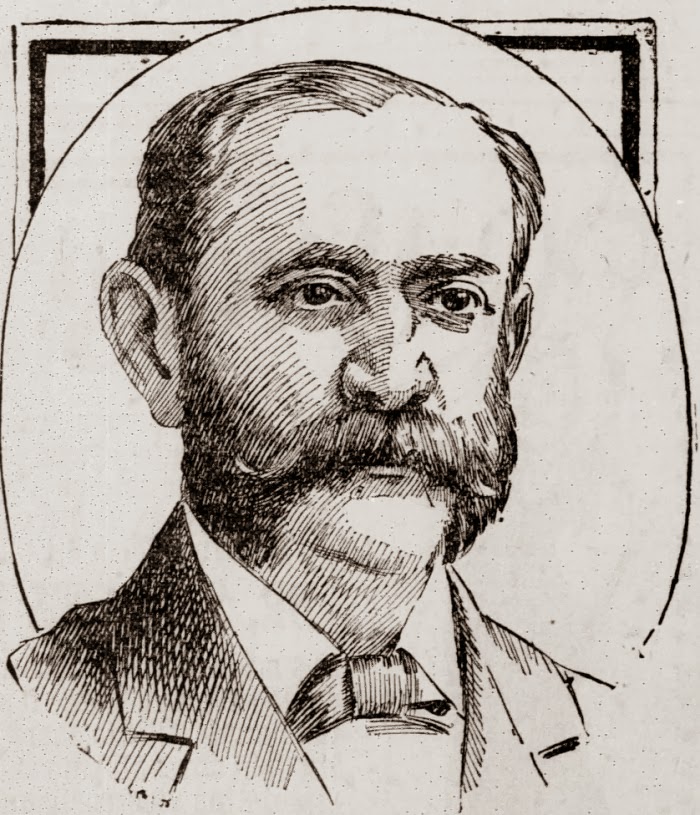 Herman and Isaac Liebes expanded their influence in the Alaskan trade with the establishment of the North American Commercial Company.  This new firm, aided by considerable political connections in Washington D.C., successfully outbid the ACC and other competitors for a new government fur seal lease at the Pribilofs in 1890.  Isaac was the first president of the NACC and Herman likely played a central role in its founding. [6] While the NACC focused its energies on fur sealing, sea otter hunting was not neglected.  In 1896, an ACC employee at Sanak Island in the Aleutians noted the activity of a NACC schooner named the Therese “which is to hunt sea otter in these waters.” [7] Other Liebes vessels brought sea otter pelts to San Francisco in the 1890s.  The Alexander brought in six skins “consigned to H. Liebes & Co.” in 1891. [8] Relatively low catches such as the Alexander’s were not uncommon at the time, and fears were mounting that the species was going extinct.
A Treasury Department report in 1897, one of the first government documents to focus exclusively on the sea otter, noted the decline in the otter fur trade and its impact on native Aleutian hunters.  As it warned, “Under present conditions the sea otter is becoming extinct, and, as many of the hunting schooners are manned by white hunters from San Francisco, the natives are receiving only a part of the benefit.” [9] That same year, the United States and other countries of the North Pacific made continued efforts to protect both the fur seal and the sea otter.  Included in the regulations was the first attempt to impose an international ban on killing otters. [10]
By that time Herman Liebes had moved to London for medical reasons and Isaac had taken over control of his cousin’s business interests in San Francisco. [11] In February of 1898, Liebes passed away in London.  He died “far from home,” according to the San Francisco Call, far from the ocean and marine life which enabled him to build a commercial empire. [12]
—
[1] “The Fur Trade of San Francisco,” The New York Times, October 6, 1867; Don MacGillivray, Captain Alex MacLean: Jack London’s Sea Wolf (Vancouver: UBC Press, 2008), 67, 279n13.
[2] For the Alaska Commercial Company, see Molly Lee, “Context and Contact: The History and Activities of the Alaska Commercial Company, 1867-1900,” in Nelson H.H. Graburn, Molly Lee, Jean-Loup Rousselot, eds., Catalogue Raisonne of the Alaska Commercial Company Collection, Phoebe Apperson Hearst Museum of Anthropology (Berkeley: University of California Press, 1996.
[3] See Rudolf Glanz, “From Fur Rush to Gold Rushes: Alaskan Jewry from the Late Nineteenth to the Early Twentieth Centuries,” Western States Jewish Historical Quarterly 14 (January 1976), 99; Norton B. Stern, “The Liebes Company: Importers and Manufacturers of Fur Products, San Francisco, California & Alaska,” Western States Jewish History XLI, 1 (Fall 2008), 211.
[4] United States, House of Representatives, Report from the Committee on Merchant Marine and Fisheries, Investigation of The Fur Seal and Other Fisheries of Alaska (Washington, D.C.: Government Printing Office, 1889), 397.  The trader also noted that H. Liebes maintained a store “for several years” at Belkofski on the Alaska Peninsula.
[5] John S. Hittell, The Commerce and Industries of the Pacific Coast of North America (San Francisco: A.L. Bancroft & Co., Publishers, 1882), 337.
[6] MacGillivray, 74-75.
[7] Book I: Unalaska Letter Book #6 (Outgoing), 1895-1897, Page 42, in J. Pennelope Goforth, ed., Bringing Aleutian History Home: The Lost Ledgers of the Alaska Commercial Company, 1875-1897 (DVD, 2011).  Special thanks to Alaska maritime historian Pennelope Goforth for providing me a copy of this resource.
[8] The Morning Call, December 27, 1891, 2.
[9] C. L. Hooper, A Report on the Sea-Otter Banks of Alaska (Washington, D.C.: Government Printing Office, 1897), 13.
[10] United States Department of State, Protocols of the International Fur Seal Conference (1897).  Also see Kirkpatrick Dorsey, The Dawn of Conservation Diplomacy: U.S.-Canadian Wildlife Protection Treaties in the Progressive Era (Seattle: University of Washington Press, 1998), 127-128.
[11] MacGillivray, 115.
[12] The San Francisco Call, March 2, 1898, 7.