How Seward Escaped Being Named Vituska

The curious story of the naming of the town of Seward was documented aboard the steamer BERTHA out of Seattle bound for Alaska on her regular monthly voyage in the summer of 1902. A party of engineers for the Alaska Central Railway headed to Resurrection Bay and a professor of history from the University of Washington made their acquaintance on deck. The result of their meeting has preserved how the town of Seward narrowly escaped being called Vituska.

“It is not often that complete documentary evidence is preserved showing the manner and reason of naming a city. For that reason it is thought best to here record the letters and orders resulting in this honor to the memory of the great War Secretary of State,” wrote professor Edmond S. Meany in 1907. Meany, best known as the publisher of the Seattle Post-Intelligencer and for his long association with the University of Washington, was also an avid historian who wrote many articles about the early years of the Pacific Northwest.

In Meany’s day, Alaska was the destination of anyone who wanted to make their fortune: fishing salmon, mining gold, and building railroads. It was all happening in the economic boom in Alaska. He had graduated valedictorian in 1885 at the University of Washington with a degree in science. To put himself through college he worked as a journalist. His credentials sent him to the World’s Columbian Exhibition in Chicago in 1893. This trip impressed him so much that later in life he was instrumental in crafting the Alaska-Yukon-Pacific Exposition of 1909. By 1897 Meany headed the History Department at the university where he taught courses in forestry and Pacific Northwest history. And he went on to found the Washington Historical Quarterly in which he described the naming of the railroad town in Resurrection Bay.

In fact, Meany played an instrumental role in seeing that the town bear witness to one his heroes, William Seward. In a piece that ran in the Washington Historical Quarterly in the spring of 1907, he lists the correspondence that documented the process. Fittingly, he begins with a letter he received from C. M. Anderson, the Chief Engineer of the Alaska Central Railway Company dated June 23, 1902:

Dear Sir: I have been giving some thought to the question of a name for the town at the southern terminus of the Alaska Central Railway. This town will be a nice commanding site on Resurrection Bay, which Bay is the only open port the year round on what is known as the South Coast of the main part of Alaska, and is about in the middle of said South Coast, being between Prince William Sound and Cook’s Inlet.

One of our engineers has suggested the name ‘Almouth,’ meaning mouth of Alaska. While not satisfied with the name, I am not myself able to think of a better one, and wish that you would make some suggestion to me in the matter.

Within a week Meany responded:

I thank you for the opportunity of suggesting a name for the southern terminus of the new railroad. The name above all others most appropriate for a prominent city in Alaska is Seward.

The Alaska Purchase Treaty was concluded 30 March 1867; ratifications exchanged at Washington on 20 June 1867; proclaimed 20 June 1867. The treaty was signed by William H. Seward for the United States and Edouard de Stoeckl for Russia.

The purchased empire was little appreciated. It was ridiculed by Harper’s Weekly and others as ‘Seward’s Paradise,’ etc. Practically all the negotiations were conducted by Seward.

More than any other one man is he responsible for American ownership of Alaska.

By all means let us honor the great War Secretary of State. I have examined the official list of U. S, post offices dated 1 January 1902, and find no Seward in the list.

Mr. C. L. Wayland, U. S. Inspector of Post offices, will soon leave for Alaska. He establishes and often names new post-offices. You should see him and arrange for the name you decide upon.

I am somewhat familiar with the history of Alaska, and if Seward is found impossible for any reason I could suggest other names that would commemorate significant facts. To me this method of naming cities is much to be preferred to the plan of sticking pieces of names together as ‘Almouth’ or ‘Bucoda.’*

Anderson liked the idea much better than Almouth. The following day he recommended the name to the president of the railroad company, G. W. Dickinson who agreed. “Good idea to have concurrence of P. O. people. Ask WayLand,” Dickinson penciled in a note to Anderson that same day. 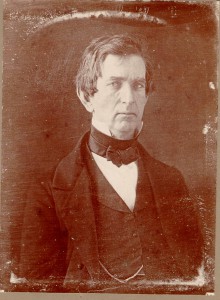 Here’s where it gets tricky.

Anderson dutifully wrote to Postal Inspector Wayland, “Please act on Mr. Meany’s suggestion if you can do so.”

In compliance with your attached request I would suggest the name of ‘Vituska,’ pronounced Ve-tus-ka, and being made up (1) of the first (and chief) name of Vitus Bering, the Dane, who for Russia in 1728 to 1741 discovered Alaska, the Bering Sea and Strait and thus completed the discovery of North and South America begun by Columbus 250 years before, and (2) of the final syllable of Alaska.

This is a positively distinct and striking and solid name and sounds exactly like it belonged to Alaska — as it does.

I can’t share Prof. Meany’s aversion to names made of pieces. It has been the loving task of all lexicographers to show how nearly all words were built of pieces and to show the meaning of the word through the meanings of its pieces.

Only a few days later on the July 8, Anderson reluctantly passes on Wayland’s suggestion to Dickinson for final resolution:

If thought best to accept Mr. Wayland’s suggestion to name the terminal ‘Vituska,’ I would suggest that the name of the Bay be made ‘Almouth.’

While not personally very pleasantly impressed with the name ‘Vituska’ in respect to Mr. Wayland’s suggestion, shall use said name unless I receive contrary suggestion from you.

Dickinson penciled, “O. K. — G. W. D.” on the original letter. This string of letters was provided to Meany on that trip aboard the BERTHA in July of 1902 according to Meany. At the end of the article he writes, “The only missing item is the order, if any was given, by which ‘Vituska’ was set aside and the originally suggested name of ‘Seward’ was decided upon for the city thus founded in Alaska in 1902.”

*Bucoda is a town in Thurston County, Washington, named in about 1874 using the first two letters of three principal investors in local industries- Buckley, Coulter, and David.