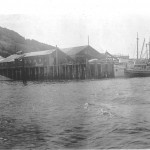 Iron Creek fishery in the 1930s. Salmon cannery on the left, herring plant in large building to its right.

Raspberry Island is a small, steep and densely wooded island wedged between the larger islands of Kodiak and Afognak in southwestern Alaska. It is separated from Afognak to its north by a narrow channel called Raspberry Strait, and along Raspberry Strait in 1951 there were three herring reduction plants called Port Wakefield, Port Vita and Iron Creek. Iron Creek was the smallest, having no fishing boats of its own but relying on independent herring boats for its supply of fish. Unlike the other plants, Iron Creek also had a small salmon cannery. The salmon cannery was operated by a group of Aleut girls with an older woman in charge, from Afognak across the strait, while the workers in the herring plant were a combination of college boys between terms and older seasonal workers from the Seattle area. In the summers of 1950 and 1951, my brother Phil was one of the college boys, and I was another of them in 1951.

Herring are small fish which travel in large schools. Most of them are not used directly for human food, but are converted into oil and meal (used for animal food and fertilizer) in a herring reduction plant. To facilitate pressing the liquid (oil and water) out of the fish, they were first cooked by moving them with a screw conveyor through a long, steam-jacketed tube. Next they were pressed in a perforated cylinder from which the liquid was drained as the fish were  pressed. The liquid went to a centrifuge where the oil and water were separated, while the compressed residue, now called press cake, was fed into a dryer and then ground into meal, which went to a large hopper where it flowed into burlap sacks for shipping. This is where I came in. I was a “meal sacker.”

The final step involved a “sacking team,” usually an inexperienced college kid teamed with an experienced worker. One would hold the sack under the hopper until it was nearly full, then the other would quickly move the sack aside for sewing. While the next sack was filling, the sewer would sew the first sack shut. I was always the “sacker” at first, but as I gradually mastered the sewing technique we took turns sacking and sewing. The sacks were moderately heavy (perhaps as much as 50 pounds) and the work was unrelenting, keeping up with the supply of meal coming out of the hopper, but it was pleasant, mindless work and satisfying as the sacks began to accumulate at the far end of the loft.

Although we worked hard when we had fish, there was some leisure time, too. With the girls in the salmon plant, we had a bit of a social life. The girls were Martha Berestoff, Alice Gunderson, Irene Nelson, Zenaida Sheratine and Dora Kewan. The Aleuts’ first European contacts were Russians, by whom Alaska was first colonized, and they would also have had many later contacts with Scandinavian fishermen from the Seattle area or possibly even from Scandinavia itself. Russian and Scandinavian surnames were common among the people of Afognak.

The social center of the camp was the two story cook-house, whose upper story was a large vacant room suitable for dancing. (It can be glimpsed at the left of the picture, behind the salmon cannery.) The girls had a collection of old 78 rpm records, mail-ordered from Sears Roebuck. My favorite among them was the song “Alice Blue Gown” (a slow waltz), which was written in honor of Teddy Roosevelt’s daughter Alice, but which made me sentimental because I had a shy and unrequited crush on Alice Gunderson. Aside from dances, we sometimes had beach parties in a secluded clearing at the edge of the beach, with a case of beer and a big fire. These were kind of frustrating, though, because it didn’t get dark until about 11:30, and then just as the party was getting exciting it would start to get light again.

We were not the only ones chasing these girls. Some of them had boyfriends in Afognak, who worked on the boats which brought our fish. When a boat was in, our social life became more complicated. One night, after my late shift which ended at midnight, I wandered out on the pier where a party was in progress on the boat. I knew some of the boys in the crew and one of them, Billy Yurioff, with a friendly wave and a proffered bottle of beer invited me aboard. Things got a bit drunk after that, and Billy proposed a game to me which I insanely accepted. He would let me hit him in the stomach as hard as I could, and then it would be his turn. Well, Billy had been hauling nets for several years, and his belly was like a steel wall. I like to’ve broke my knuckles! Then, oops, it was Billy’s turn. I’m sure he pulled his punch, which otherwise would have gone clear through to my spine. Ooff!

There were trails to hike (with caution: there were bears). One day a few of us were walking to the west away from camp, along a faint trail in the grass, when we came to a big bear-shaped depression in the grass, apparently a recent sleeping spot. This made us a bit nervous, as did finding nearby a bush filled with salmon berries, a favorite snack of the Kodiak bear.. These berries look a lot like raspberries. Raspberry Island was named for them.

I had one other near-bear experience. I’d gone to the cook-house for a cup of coffee after the end of my late shift, and as I sat sipping my coffee I could hear two things: the camp dog’s frantic barking, and the sounds of snapping twigs and crunching of grasses just outside. Bear?  Who knows? I waited an hour until all was quiet, and then walked very nervously back to my bunkhouse.

We bought our fish from independent boat owners in the area. I believe that the Cape Karluk and the Shelikof sometimes called at Iron Creek, and possibly others as well. They and the other boats didn’t call very often in 1951, though, and they were often half empty when they did. After a very good 1950 season, which ran until mid-October, the 1951 season was disastrous for the company and nearly so for Phil and me. The plant was closed and we went home to Seattle at the beginning of September, with the herring loft only about a quarter full of meal sacks and some uncertainty about when we would get paid. Before that, though, the disastrous season brought me one more adventure.

We had a small open motor-boat with slat seats forward and room for a load of fish behind them. I’ve seen similar boats described as “skiffs,” but I think ours was called a “jitney.” The crew could use it in their off-hours to fish for salmon in Raspberry Strait, and the company would pay the going rate for them. There weren’t many salmon there in 1951, though, and the plant was desperate for fish of any kind. At some level, permission was given to the night crew of the herring plant (including me) to take the boat to the mouth of a stream on Afognak Island near the juncture of Raspberry Strait and Shelikof Strait, where we were to spread a net near the mouth of the stream to trap salmon on their way upstream to spawn. This activity, called “creek robbing,” was not only unsporting, it was illegal. We (and the company) risked a significant fine if caught.

We operated under cover of darkness, leaving Iron Creek as soon as the plant had been shut down at midnight. The older men knew their way in the dark. I was just riding along, although I was able to help with the net later. We found some salmon and netted them, although I can’t say whether the haul would be called good or meager. They were ugly fish, humpback salmon (also called “pink”) in their spawning dress, spotted black on the greenish back and tail, with a grotesque hump behind the head, but they would taste good from a can. We hauled in our net and departed just before daybreak (which still came quite early, even in late August), and were back at Iron Creek in time to unload and have breakfast.

The company was known as “Southwestern Fisheries,” and sometimes apparently as Southwestern Herring Company or Southwestern Canning Company. In her book Salmon from Kodiak (1), Patricia Roppel writes:

”In 1949, the cannery that Pajoman and his partner Trout had built at Iron Creek processed salmon again. Southwestern Fisheries installed one line of salmon canning equipment in a building adjacent to the herring plant that year to produce a small pack of  8,388 cases.” [I believe that a new building was built to house the new equipment. The picture (i) shows a string of apparently separate small buildings beside the herring plant, but the cannery which I saw in 1951 was a single long building without interruptions in its roofline. Phil’s memory is that the cannery building looked “brand new” when he arrived in June, 1950.]

“In June 1950, the Southwestern Canning Company filed papers in Juneau for a corporation capitalized at $100,000. The incorporators, all from Seattle, were John W. Sweet, William R. Eddleman, and Fleta Van Dyke. A quit claim deed for the patented trade and manufacturing site transferred the property from the Southwestern Herring Company to the new company in July of that year.”

This seems to have been a financial reorganization of a possibly bankrupt company, and the $100,000 was probably in the form of a loan from the Small Business Administration, a government agency for which my uncle Robert Hurlbut was working at that time. Phil got his Iron Creek job in June, 1950. That job and my job in 1951 may have been due to good relations between the company’s owners and Uncle Bob.

The final chapter: As reported by Ms. Roppel, “On October 1, 1951, fire destroyed the cannery.” Given the proximity of the salmon cannery and the herring plant, both being wooden structures, and the fact that spontaneous combustion was a concern for sacked herring meal, I would guess that the fire began in the herring building, and that both buildings were destroyed. The pier would have been damaged as well, if not fully destroyed. The plant was never rebuilt.

Phil and I got paid about a month later.