One of the first salmon canneries to open in Alaska incited a riot before the ship had even offloaded a single tin can. The incident, involving locals and imported labor, was the first of many such conflicts in Alaska over the rights to the seemingly endless resource of salmon. The fracas epitomizes the classic Pacific Coast fisheries struggle of indigenous subsistence users and capitalized ‘outside interests’ boosted by technology.

Alaska historian Patricia Roppel references this incident in a recent piece titled Southeast History: Sitka’s first salmon cannery – 1878[i] as does Steve Henrikson in an earlier blog article, History in a Can.[ii] The original story is related by William Governeur Morris, Special Agent of the U.S. Treasury Department in his report on ‘the condition of the public service, resources, &c. of Alaska Territory.’[iii]

The narrative reads like a cautionary tale and indeed serves the underlying thesis of Morris’ report which was the lawlessness then rampant a decade after the cession in the absence of any civil authority, prevalent drunkenness, and the resulting violence. “The following narrative is given to show how completely the Indians are masters of the situation, and that when aroused by anger or any other disturbing element which renders them intractable, how ungovernable they become.”[iv] Yet the theme that plays out here remains a staple to this day in Alaska cannery operations: local labor interests versus Outside business development. 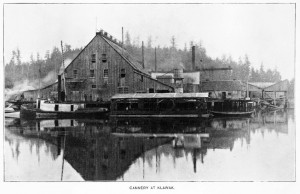 The success of canneries in Alaska begins in Sacramento with the great gold rush of 1849 in California. The brothers William, George, and John Hume, had a successful salmon fishing and salting operation on the Sacramento River feeding San Francisco gold miners in the 1850s. By 1864 they eagerly adopted the new technique of cooking salmon in tin cans. With expertise from tinsmith friend Andrew Hapgood who joined their company, the brothers established a busy cannery operation. However, they and other fish processing outfits in the area, were so successful that the salmon runs were depleting.

Seeking new sources the pioneering salmon canners, moved up the coast to the lower Columbia River in Oregon Territory several miles northeast of the busy port of Astoria. Along the northern bank they found flocks of plump eagles and wisely set up a new cannery operation there in 1866, later known as Eagle Cliff Cannery. It was the first of many successful canneries on the Columbia. From here they shipped their product to the East Coast and as far away as Australia.

Word coming down from the newly acquired territory of Alaska soon attracted their attention with stories of runs of 45 lb king salmon.[v] An Affairs in Alaska column in the Port Townsend Weekly Argus, entitled Bright Prospects asserts the activities of an unnamed company ‘with a capital of $100,000 mean business.’ The writer goes on to report that the schooner CALIFORNIA landed 120 tons of freight including ‘machinery for a steam sawmill and large canning establishment; also 50 tons of tin.’ Interesting is what he doesn’t mention: a crowd of Tlingits protesting the landing of some 18 Chinese workers. ‘Within the coming three months the CALIFORNIA will land at Clawock [sic] 200 tons of freight and all the men necessary to run the cannery business.’

Near the port of Sitka in Southeast Alaska, the local Tlingit Indians had a traditional ‘fish camp’ on a small spit of land off Prince of Wales Island. Here they came for the prolific salmon that formed their staple food for generations. Just across the water from the village on Fish Egg Island an enterprising American, George Hamilton, lured by the good press generated in the heady years of the late 1860s, set up a trading post called Hamilton’s Fishery. He caught, bought, salted and sold barrels of salmon.[vi]

Roppel shows us that Hamilton hired Haida and Klawock Natives to work the saltery along with other white men. The business trails of white entrepreneurs in the territory, especially in the relatively small group operating in Southeast Alaska, frequently crossed. Hamilton struck up an acquaintance with Charles Waldron who had a trading post at Tongass village near Ketchikan just south of him on Revillagagedo Island. In the early 1870s Waldron is involved in Hamilton’s now bustling trade. In 1873 Hamilton loads a sizeable cargo of ‘800 barrels of salt salmon, a hundred barrels of fish oil, and a few bundles of furs and skins’ with Waldron aboard the ill-fated GEORGE S. WRIGHT.[vii]

Hamilton manages to survive the resulting crisis from the loss of his business associate and his entire season output. But he sold his outfit a few years later to a surprising new business concern in San Francisco: Sisson, Wallace and Company.[viii] They created yet another firm, the North Pacific Trading and Packing Company, to turn the old saltery into a state of the art cannery, complete with a sawmill and tinworks.

Previously this firm provided personnel services for construction projects including canals and railroads. Namely, Chinese laborers.[ix] Presumably they branched out into the fisheries, also purchasing vessels to be sent north to Alaska to serve as canneries, complete with staffing. Such as the former Pacific Mail Line steamer JOHN L STEPHENS that was dispatched to Karluk to serve as a floating cannery.[x]

The CALIFORNIA however, was a humble merchant cargo carrier in the coastwise trade, out of Portland, Oregon Territory making the Victoria, British Columbia and Southeast Alaska ports run. She is most famous for having carried the somewhat disgraced Army Companies G & M, 4th Artillery, Capt. A. Morris, commanding, out of Alaskan waters the previous year when the Army was ordered out of the territory.[xi] Schooner rigged at 168 feet, she delivered mail and was owned by P.B. Cornwall.[xii] It is on the deck of the CALIFORNIA, that the crisis over labor erupts while the ship is en route to Klawock with the equipment destined for the new North Pacific Trading and Packing Company facility. In another twist of fate, the entire NPTP effort was lead by a man named Hunter who previously ran one of the Eagle Cliff Canneries.

Special Agent Morris, who narrates the episode in his report, was in Sitka as part of a tour of duty of Alaska. Sent by the U.S. Department of the Treasury, which was essentially governing the territory at the time ‘in regard to the condition of the public services, resources, &c., of the Alaska Territory.’[xiii] Morris accidentally stumbled into the event when he accepted an offer from the CALIFORNIA’s Captain Charles Thorne to hop aboard for a trip to Klawock since the official government transport, the U.S. Revenue Cutter Service WOLCOTT was in Wrangell at the time. He brings with him a Mr. J.W. Keen who can act as an interpreter since he spoke the Tlingit language as well as the common Pacific Northwest trade patois known as Chinook (Chinuk) Jargon. Once aboard, he discovers the vessel is loaded with supplies for the new cannery including ‘eighteen Chinamen, who were hired exclusively to manufacture the tin cans.’[xiv]

The presence of the Chinese laborers must have inflamed not only the Native inhabitants who were gathered on the wharf and beaches that blustery cold day of March 16th to observe the spectacle of the ship arrival but also the disgruntled white men of Sitka who were unemployed. In fact, Morris’ description of ‘heathen Chinee’ is more of a white epithet than a Tlingit, Haida or Tsimshian adjective.

Morris also mentions the presence of a local man called Sitka Jack who could speak Chinook. He doesn’t tell why, but apparently the chief, known as Annah Hoots, declared to the assembled people that the Chinamen should not be allowed to land. Morse and Hunter attempted to defuse the antipathy toward the Chinese by explaining that they were there only to make tin cans at the new cannery at Klawock and didn’t represent any threat to the local unemployed. Things were not going well. More people from the surrounding Native encampments began arriving in an agitated state and a frightened Hunter had second thoughts, ‘…[Hunter] decided not to attempt to establish his fishery, and at once abandoned the enterprise, stating he had positive instructions from his employers not to land a pound of material unless everything was quiet, and there was no prospective danger.”[xv] And, further, Hunter tells Morris that the owners believed the new cannery would have recourse to the protective services of a nearby revenue cutter stationed at Sitka.

This was a relevant concern as the local tribes were accustomed to asserting their rights and while they might back down in the face of guns, they felt they had a legitimate reason to protest any further incursions on their territory and resultant loss of resources. The shelling of the village of Kake by the USS SAGINAW in 1869 and other armed retributions by individuals and the government still stung.

At the height of the ruckus, Morris relates the scene of the negotiations:

“Mr. Hunter, Keen and myself mounted to the hurricane deck [of the CALIFORNIA]; Annah Hoots and Sitka Jack right under us on the dock, and the whole tribe scattered about howling and yelling like Satan. Under this state of affairs the wa-wa [talks] began.

“I relied very much on the good sense of Jack, who was very anxious to have the cannery there, and in truth, so were all the Indians; but the point of controversy was, that the Chinamen had been imported to catch the fish, and that the Indians were half-naked and hungry, deserved the employment by right, and they would fight before they would permit any such infringement upon their reserved rights. It was their country and John Chinaman should not come. A very strong argument, it must be admitted.

“Mr Hunter very frankly explained to the Indians such was not the case; it was entirely foreign to his own views as well as those who employed him/ that is was his intention to buy all his fish from the Indians; that the Chinamen were brought along to make tin cans, and when they had finished the cans they should be sent away. Furthermore, if the Indians would learn to make cans, no more Chinamen should be employed.

“Mr. Keen very adroitly impress upon those present the folly of their course, and I am satisfied it was owing a great deal to the tact and judgment displayed by him that we succeeded as well as we did. I had but little to say, only to remind them the ‘man-of-war’ was not far off, lying at anchor at Wrangel, and if they wanted a gunnery practice, they should be speedily entertained.”[xvi]

As the Tlingit discussed the words of explanation and veiled threats amongst themselves the tumult appeared to pass. Morris continues:

“In a very short time as many Indians as could be set profitably to work were hired by Mr. Hunter to discharge his material, the Chinamen landed in perfect security, walked up town, hired a cabin from one of the tribe, purchased wood and by night-fall were snugly domiciled, with half a dozen dusky klootchmen (squaws) squatted on the floor and enjoying their fish and rice. Thus ended what might have proved a very serious affair.”[xvii]

In retrospect, it was actually the beginning of the mega-billion salmon cannery industry in Alaska which nearly wiped out the salmon runs and certainly challenged the rights of the First Alaskans.

[ii] Henrikson, Steve. History in a Can. alaskancanneries.blogspot.com. June 1, 2014.

[ix] Ramirez, Salvador A. The Inside Man: The Life and Times of Mark Hopkins. Tentacled Press. Carlsbad, CA. 2007. Clark Crocker, principal in Sisson, Wallace and Co. was the agent for Chinese laborers, whom he imported for $80 (payable by the worker) who then worked for $1 a day from which his food and lodging were deducted. Page 580.

[x] http://www.geocities.com/mppraetorius/com-jo.htm last accessed 071314. The wooden side-wheel steamer, brigantine rigged, cold hold 350-400 people at 275 feet overall with a 41 foot beam. She had three decks and sported a steam condenser for fresh water. All these attributes made her a good floating cannery.