Cod fishing is a rather rough life.

For any disobedience of lawful commands from said Master or the Officers of the Vessel, whoever they may be, it is agreed to forfeit to the Owner One Thousand Codfish for each offense and for a false report of catch of codfish to the Master, the Fisherman agrees to forfeit the catch so falsely reported.

Fishing for codfish in the Bering Sea and Gulf of Alaska was hard, uncomfortable, and very dangerous work that was done far from friends and family and with little certainty of remuneration. The journeys to and from Alaska took three to five weeks, depending on the destination, and once a vessel arrived on the fishing grounds—where it would spend several months—severe weather could preclude fishing for weeks on end. 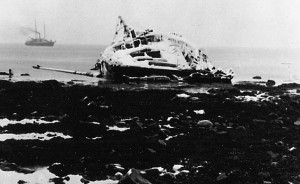 The wreck of the cod fishing schooner JOHN F. MILLER, just off Cape Pankov on Unimak Island with the SS DORA in the background. Photograph by John E. Thwaites, ca. 1908.

In its early days, however, the fishery was lucrative. Many of the fishermen employed in it were veterans of the Atlantic cod fishery and had sailed to California from New England on fishing schooners purchased for use in the Pacific cod fishery. These trained fishermen, in the words of the U.S. Fish Commission’s Captain J.W. Collins, “carried to the Pacific a skill gained by years of experience in the Atlantic fisheries, and hardihood and daring unexcelled.”[3]

The Pacific codfish industry declined during the 1880s, and in later years became an occupation that didn’t attract a lot of first-class talent. The Bureau of Fisheries 1906 report on Alaska fisheries characterized the crew of a typical codfish schooner as having “a few good fishermen,” but being mostly made up of “riff-raff picked up along the water fronts of the Pacific Coast cities.”[4]

The 1905-1906 voyage to the Shumagin Islands of the San Francisco-based Pacific States Trading Company’s 107-foot, two-masted schooner GLEN is an example of how difficult, dangerous, and unprofitable working on a cod fishing schooner could be. The converted lumber carrier departed San Francisco in September 1905 and, once on the fishing grounds, experienced almost continuously stormy weather that precluded launching her dories. To make matters worse, during a gale on December 20 the GLEN dragged her anchors and went ashore. Fortunately, no one was injured and the vessel was refloated the following day. However, less than two weeks later, on New Year’s Day, the GLEN again dragged her anchors and this time went hard ashore. Once more, no one was injured, but it was a week before the GLEN, with part of her keel missing as well as other damage, was refloated. Her captain decided to return to San Francisco for repairs. But the hardships were not yet over: during her stormy, thirty-three-day return voyage, the GLEN’s main gaff and mainsail were blown away. She arrived in San Francisco on March 8, 1906, leaking badly and without enough fish to even pay the cost of outfitting the voyage, let alone the crew. However, as a token payment for a half-year of hardship and danger, each crew member received one dollar.[5]

The GLEN was repaired and put back into service, but for her the following year would prove to be fatal. On September 30, 1907, she was wrecked in East Anchor Cove (known also as Bear Harbor), on Unimak Island. One crew member drowned. The GLEN’s cargo of 38,000 codfish, however, was reported to have been intact. The 107-foot, three-masted JOHN F. MILLER (another company schooner) was sent to salvage as much of the cargo as possible. On January 8, 1908, while the JOHN F. MILLER was at anchor in the cove, a storm came up suddenly, and before the vessel could get underway, she was coated with ice. Unmanageable, the JOHN F. MILLER was driven onto a rocky beach, where she broke in half. Of her 23-man crew, all eight who were on the vessel’s forward section drowned, as did two of the 15 men in the aft section.

Stranded on the beach in the winter cold, most of the survivors soon suffered from frostbite. For sustenance they had only raw fish (from the GLEN) and a paste made from flour and water. (A few bags of flour were the only provisions that the survivors had been able to salvage from the JOHN F. MILLER’s wreckage.) In this dire situation, two courageous crew members, both fishermen, put to sea in a dory and with great hardship managed over six days to row to Sand Point, about 100 miles distant, to summon help. A cod fishing schooner, likely the MARTHA, was soon dispatched to rescue the eleven remaining men, all of whom survived. News of the tragedy was not received in San Francisco until early March, when the cod fishing schooner CZARINA arrived from the north.

Jim Mackovjak, hunkered down in Gustavus, is preparing a history of the cod fish industry which he hopes to complete this year.