Looking Back: The 1900 Nome Gold Rush

In the last week’s post, the brothers Wilfred and Ed along with their hired hand Ed Rouse were mining on a pretty good schedule. Just when things seemed to be going well tragedy strikes…

Went to bed at 7A.M. I was aroused by a cry from Ed and rushed out. Rouse was wound up in rope on the gypsy. Brother Ed and I took knives and cut him out. When we took him out his left leg fell off, cut off at the knee. One man fainted dead away. Terrible sight. Sent for a doctor and he came in half an hour. Did all in human power, but he sank gradually and died at 6:45PM just as we were preparing to operate on his leg. We dug a hole in the tundra and placed his body in the frozen earth until we dispose of it. Ed had gone to make arrangements with the undertaker. Took a subscription among the miners and raised over 50 dollars in two hours. Men who were nearly broke gave all they could. Fine set of men. Not one refused to give something. Went to bed feeling very much worn out. Have been assisting the Dr. all afternoon. 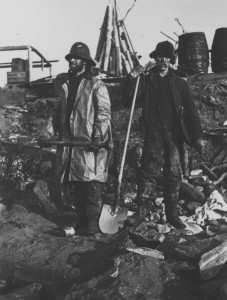 July 22nd, 1900 “Went to bed at 7A.M. I was aroused by a cry from Ed and rushed out. Rouse was wound up in rope on the gypsy. Ed and I took knives and cut him out.” Pictured left to right during better days are Ed Rouse and Ed McDaniel. Photo by Wilfred McDaniel from the Carrie M. McLain Memorial Museum Archives

Wrote a letter home this morning Ed and Mr. Denney gone to Nome to see what can be done about the body. We thought of shipping it home but don’t know what the expense will be. Joe Millard came down and took dinner with me today while Ed was away. It seems very lonesome here now when one is alone. Today is a beautiful day. It seems like California here now. The tundra is all out in bloom. Lots of pretty flowers and many varieties. I did some washing made a riffle and cleaned up the boxes while Ed was downtown. Ed heard that the government is going to establish a camp on Nome River for destitute men. People are leaving as fast as the steamers can take them.

It is now 8:45PM and Ed and I have just returned from burying Dean. We took him to the undertakers and had the body embalmed and placed in a zinc-lined box. Ed and Joe Millard and myself went out to the graveyard and dug his grave. We dug the grave in frozen ground and it was hard as concrete to dig in. We worked 3 hours and dug only four feet. We buried him ourselves and got through at 5:30PM. 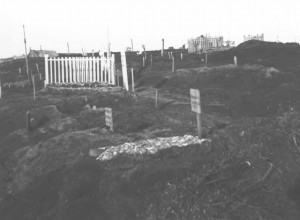 We are worn out. It’s enough to out grey hairs in a fellow’s head to be through what Ed and I have. When we took the body put of the tundra and placed in a box that we made, Dr. Tenney read some verses from the Bible and delivered a very eloquent prayer. It was a very touching scene. A dozen or so rough looking, but tenderhearted men gathered around the remains with bare heads and moist eyes while the minister asked the Master’s sympathy for the bereaved family and friends. We then placed the body in a wagon and took him to the undertakers and at 4PM we took him to his last resting place in the frozen earth of this far off land of the north.

Ed and I are completely worn out. We have been through a terrible experience in the last three days since we cut poor Dean out of the gypsy. We were with him constantly till the end. I laid him out and wrapped him up. Ed and I built the box to carry him in and dug the grave and buried him. We have had a hard siege to go through.

I put the engine in running order yesterday. It got the spark pitman bent double and out of adjustment. We will rest tomorrow and get ready for work again.

We did not do very much today. We worked some this afternoon so as to make a run tomorrow. I made some light bread today and it is baking now. It looks fine, just like mother makes. We panned on the cleanup but did not get through. Ed did some washing this morning. We will now have some clean clothes to wear when we start home in the fall.

We went to work at 9A.M. and struck some fine pay, got 25¢ to the pan. Had some rain today. Had thunder in the afternoon. We worked out about 40 cubic yards of earth today. We all feel tired. We hired a man this morning to help us for a few days. We pay him $7 per day. We are going to make a location on the beach this evening. We heard that people are locating the beach and trying to get a percentage from the plant owners. We will try and hold our own up here. Others have done as we are going to do. I don’t think there is anything in it but we will be safe anyway. Took a photograph of a beautiful sunset last evening.

Started the diggings at 7A.M. We have one man hired. Today has been very warm, almost 100° I think. We heard last night that there was a scheme among the tundra owners to stop the machines on the beach. The tundra owners try to hold the beach and the beach miners don’t respect their views. A chap came to our place today and said he represented the owners of the tundra and wanted our name. I expect there is trouble ahead. He also went to a pump next to us. We are all very tired this eve after a hard day’s work in the heat. Started to write a little home.

We made a clean up this morning and set the boxes and made a run in the afternoon. Made a very good clean up. About 100 dollars for 19 hours run. The tundra men are nosing around some but are not talking. 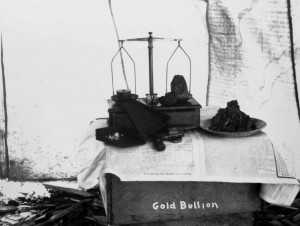 July 28th, 1900 “We made a clean up this morning and set the boxes and made a run in the afternoon. Made a very good clean up. About 100 dollars for 19 hours run.” This gold scale and are currently on exhibit at the Carrie M. McLain Memorial Museum. All the gold got spent over 100 years ago! Photo by Wilfred McDaniel from the Carrie M. McLain Memorial Museum Archives