Looking Back: The 1900 Nome Gold Rush

In the previous post on this blog, the brothers Wilfred and Ed dealt with the tragic death of their fellow miner Ed Rouse who is buried in Nome. It’s starting to get darker at night as the Midnight Sun begins to wane. Now it’s time for some weather to set in …

Today is Sunday and we are laying off. I made some bread and a pudding today. We will set the boxes and start work in the morning. We set our boxes and are ready for work tomorrow. A man who said he was a lawyer stopped here and said that the marshall told him that the soldiers were coming up the beach and arrest everyone at work. He said he was defending a man who was arrested and he was getting all the names of the beach miners. If we are all arrested there’ll be a hot time in the old town tomorrow night, my honey. 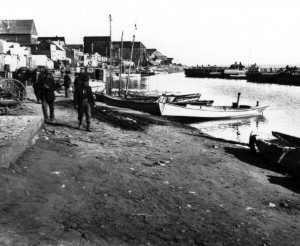 “If we are all arrested there’ll be a hot time in the old town tomorrow night, my honey.” This is River Street looking east from the present day Crowley complex toward the original mouth of the Snake River. All photos by Wilfred McDaniel from the Carrie M. McLain Memorial Museum Archives

Started as usual this morning. Some soldiers came by but did not notice us. One returned with nine prisoners. We worked out a pit 24 x 1 ft. cleaned up the bedrock. Found a small nugget today. The only one we have seen from the beach. Al Raney came up to camp today. He bought a pumping plant for $200 and will locate next to us.

Al staid with us all night. No hard trouble again with our pump. The sea is rough and the surf is full of sea moss. It gets into the pump runner and clogs it up. Ed went to a miner’s meeting this afternoon. Lots of talk about the beach. We worked until 9:15PM. The water jacket on the engine became clogged with sand and moss so that we had to stop. 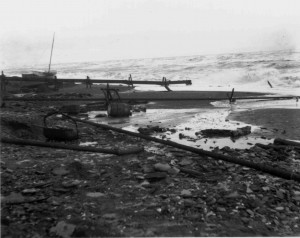 “The sea is rough and the surf is full of sea moss. It gets into the pump runner and clogs it up.”

All the pumping plants are stopped today as there is a rumor that we are all to be arrested today. We took our boxes down and cleaned up. The weather is getting very stormy and the sea is getting rough. We took supper with Al Raney.

There is a big storm on now. The sea is rolling high and coming higher up on the beach than I have ever seen it. Al R. stayed with us last night. The vessels down at Nome are getting further out from shore. We had notice served on us this morning by the N.Y. Co. They forbid us working or moving our boxes or machinery. 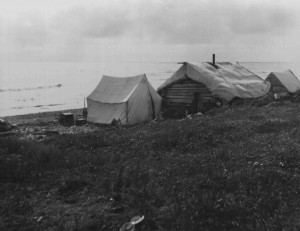 “There is a big storm on now. The sea is rolling high and coming higher up on the beach than I have ever seen it.”

We cleaned out the water jacket on the engine enclosed the pump belt. We are awaiting development. The storm has gone down. Several launches and one schooner were wrecked during the gale. New arrests were made today. We are going to see the N.Y. Co. again tomorrow and try and make an arrangement so that we can work.