Last month the Bristol Bay Historical Society marked the opening of their new museum with a familiar Naknek landmark−the iron kedge anchor of the CHARLES E. MOODY. Since about 1962 the anchor has lain next to the D&D 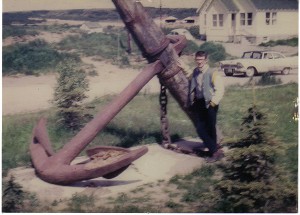 A young Ted Hadfield, somewhat dwarfed stands by the anchor of the CHARLES E. MOODY in Naknek, Alaska in 1962. (Photograph courtesy Ted Hadfield.)

Restaurant and Hotel on the highest point of uptown Naknek. Owned by the Hadfield family, Ted Hadfield recalls how the anchor came to be there: “The anchor was recovered by Crowley Maritime when their vessel anchor was being retrieved it tangled with this one. It was then brought in and displayed in front of my parents’ hotel and bar in Naknek where the crew was staying.” 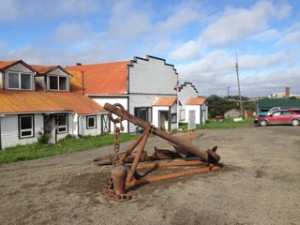 The anchor of the CHARLES E. MOODY positioned in front of the Bristol Bay Historical Society museum in Naknek. (Photograph courtesy Adelheid Herrmann.)

Bristol Bay Historical Society president Fred Anderson said he lived near where the anchor had lain all his life. “I used to go out of my house and see it there every day.” For the past decade he has worked with community members to bring the dream of a Bristol Bay museum to life in the town. In the 80s Naknek had a small museum building, filled with artifacts donated by townspeople and processors. But it had no heat and no lights. Through the years the society has struggled to find resources and funding to properly house their treasures. Now they have one.

Built in 1938, the building on the main street through town was secured for use through the efforts of Anderson and the society. Dating back to the 1930s the interior walls are of old timbers with a patina of red gold. Anderson said the foundation was raised up and new beams installed making it sound. For many years the building served as the library of former Alaska State Representative Adelheid Herrmann. “It was a community effort to make this happen,” Anderson said. Alaska General Seafoods (AGS) sent a crew down to help give the old building a new paint job. They also put in a handicapped accessible ramp.

“For many years I had been asking Gary Hadfield, whose family owns the anchor, if they would consider donating to the museum when we got it going,” Anderson explained. “I called him up and said AGS would send equipment down to move it. He finally said ok, take it. I got all emotional then. Gary did too.” 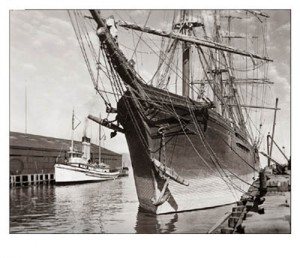 The CHARLES E. MOODY at the dock in Seattle ca. 1911. The anchor is visible against the hull as the vessel is unloaded and sitting high in the water. (Photograph courtesy Ted Hadfield.)

The 4,000 pound iron piece had lain in the ground so long it had sunk in through the years of frost and thaw digging itself several inches into the dirt, so when it was pulled upright for the first time in decades it left a deep imprint. Gently, the guys hooked it up high and slowly moved it to AGS where a new foundation was being fabricated. Then they hauled the CHARLES E.MOODY’s anchor and platform designed by Anderson to grace the front of the building. AGS brought down an old iron bollard as well and the anchor chain was symbolically wrapped around it.

The memory of the ship is long gone but for the anchor and an old black and white photo of the MOODY in her glory that hangs in the Hadfield’s bar. “It’s so much more than a rusty old anchor,” Anderson said. “It’s part of our history.”  Now respectfully and prominently displayed the anchor will continue to tell the story of the integral part it played in the salmon industry of Naknek.

The CHARLES E. MOODY slid off the Goss, Sawyer & Packard marine ways in the venerable shipbuilding town of Bath, Maine in 1882. Bath was famed the world over for the ‘down easter’ design of these magnificent square-rigged wooden sailing vessels. The vessels were a graceful hybrid of the speedy clipper ships with a profitably large cargo capacity. Commissioned by noted shipmaster Captain John R. Kelley, the vessel was named for a prominent Maine merchant and ship owner. The graceful vessel was 240 feet long, 43.4 feet in breadth, and drew 18.2 feet. She sported full-rigged sails with a typically long bowsprit and skysails. The MOODY sailed as a merchant vessel in the northeast coastwise trade for nearly 20 years. 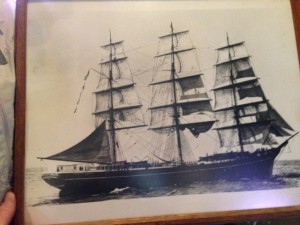 The CHARLES E. MOODY in the prime of her sailing life. This photo hangs in the D & D Bar in Naknek.

Then came the Klondike gold rush.  In 1900 the MOODY sailed around the horn joining many other ships of her kind that became the workhorses of the west coast sailing routes. Home ported in San Francisco she hauled passengers, lumber, salt cod, and salmon in the busy Pacific coastwise trade.

In 1911 she was purchased by the Alaska Syndicate, a group of East Coast financiers and West Coast businessmen. They formed the Northwestern Commercial Company which owned the Northwestern Steamship Company (NSC) and the Northwest Fisheries Company (NFC) in 1906. Composed of prominent Seattle businessman John Rosene, J.P. Morgan & Company and Guggenheim Brothers, the Alaska Syndicate was heavily invested in Alaska transportation including shipping and railroads, and mining interests. Highly successful, NFC owned and operated 12 salmon canneries in Alaska putting up 300,000 cases annually, valued between $1.25-1.4 million. The MOODY sailed under the NSC flag although she was nominally owned by NFC.

Now home ported in Port Townsend, the MOODY was one of the fastest sailing ships of the day even fully loaded with supplies, coal, and men. With Capt. Peter Bergman at the helm, she made a voyage from Cape Flattery to Orca in an astonishing 10 days, about 5 days faster than other fisheries cargo vessels in her class. A stalwart sailing vessel, she breasted the rigors of the northern seas without much incident for about nine years. Her last voyage took place in 1920.

The CHARLES E. MOODY loaded up at the dock in Seattle on April 20th for the upcoming salmon season in Bristol Bay. She was to take a cannery crew of 136 men, supplies for the NFC plant in Naknek, a number of fishing dories lashed to her deck, and 200 tons of coal. The voyage went without incident and she reached Naknek by the first week in June and offloaded her passengers and cargo. The NFC plant was called Nornek since it was a small city sized operation on the northern shore of the Naknek River. Several hundred seafood processors lived in the bunkhouses when they were not busy pughing, sliming, and canning salmon. Because the season was so short and frenetic, cannery vessels often anchored just offshore to await the first pack of the season. Although the cannery had a long dock it was reserved for fishing boats and barges that brought fish in. Plus the tidal variations made it difficult for deep draught vessels like the MOODY to stay at the dock much beyond mean high tide. The mate anchored her in the Bristol Bay roadstead at the mouth of the Naknek River in the sandy bottom and was standing by for further orders. Presumably the master, Mark Haskell, was at the NFC plant ashore leaving the mate aboard. He had set the anchor light, despite the long northern summer days, at 9:00pm that evening and reported he had gone to his bunk shortly thereafter.

In the light dusk that passes for a summer night at 58 degrees latitude a passing fishing boat hailed him with shouts of “FIRE! FIRE! Ahoy, MOODY, FIRE!” Thick smoke billowed around the forecastle of the vessel with flames climbing the halyards. The mate jumped into the fishing boat with nothing but the clothes he wore. Nearby the Alaska Packers tug KAYJAK came alongside and blasted water at the blaze. Joined by the steamer SHELIKOV, the rescuers pumped hoses for nearly an hour but were unable to quench the fire. Hundreds of people watched anxiously from both sides of the river. A fleet of fishing dories paused hauling in fish to see the brightly burning vessel in the faint early morning light. The crackling of the wooden hull and the minor explosions of oils and other supplies still aboard the vessel echoed off the banks; her spars crashed and the furled canvas sails towering two stories tall whooshed into flame lighting up the docks and the throngs of people on them. She burned to the waterline by the afternoon, a blackened smoldering hulk riding high on the river’s current.

Although she was valued at $320,000, NFC only insured her for $80,000 plus $3,400 for miscellaneous cargo. Fortunately, she had no fish aboard. Eventually the remains of the wreck were towed out to the bay where it sank. Only the chain cable attached to the anchor lay on the river bottom marking her passage.

After the underwriters completed their paperwork, and the 1920 salmon season ended without further incident, the memory of the CHARLES E. MOODY gradually faded into myth.

But her beauty lived on in the in the work of sailor/painter Charles Robert Patterson. The British son of a shipbuilder, born in 1878 in Southampton, was apprenticed at age 13 and spent the next decade at sea. Taken with the endless glory of the graceful ships on the high seas he turned to art in the 1920s. Settling in New York Patterson studied the art of oil painting. He set out making a name for himself painting all the great ships of the late 20th century. Among the more than 400 canvases of nautical paintings portraying the life of ships and sailors at sea as only a mariner could, he included the CHARLES E. MOODY. Titled ‘Down-easter CHARLES E. MOODY entering San Francisco Harbor’, this life-like picture of the vessel hung on the walls of the San Francisco Ritz-Carleton Hotel for many years. It was sold at auction for $3,050 to a private collector in December of 2009. 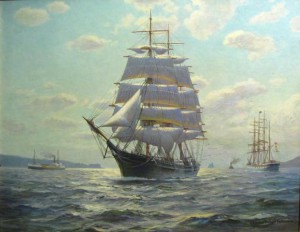 Forty years later, the spirit of the CHARLES E. MOODY stirred again. In 1962 her anchor, still in the Naknek River, fouled the line of a Crowley Maritime vessel, which hauled up the anchor and it was brought ashore. Old timers recalled the midsummer excitement of the burning of the CHARLES E. MOODY and so the anchor was placed near D&Ds where the crew of the Crowley vessel were posted. For a time her story circulated anew among a new generation of fishermen. Over the next forty years, many summer salmon fishermen and processors had their photos taken with the iconic anchor. And now, the Bristol Bay Historical Society has ensured that the name of the CHARLES E. MOODY will remain alive in Naknek history.

“When I saw the imprint of the anchor in the ground after it was moved, it looked like a grave to me,” Anderson mused. “I thought it should be remembered somehow so I was going to scatter wildflower seeds in the shape of the anchor there. But someone beat me to it and filled the anchor’s indent with perennial flowers!” 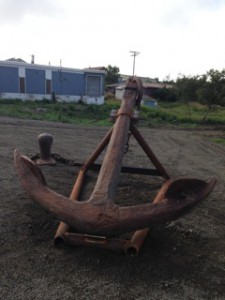 The 4,000 lb kedge anchor of the CHARLES E. MOODY, salvaged from the mouth of the Naknek River where she burned to the waterline.

The author wishes to acknowledge the invaluable assistance of Adelheid Herrmann, Fred Anderson and the Hadfield Family in providing information and sharing their passion for the history of Naknek with me.  All errors are my own. Kudos to all of them for preserving the maritime history of Bristol Bay and bringing it to the public to enjoy!

The author wishes to acknowledge the invaluable assistance of Adelheid Herrmann, Fred Anderson and the Hadfield Family in providing information and sharing their passion for the history of Naknek with me.  All errors are my own. Kudos to all of them for preserving the maritime history of Bristol Bay and bringing it to the public to enjoy!