One Alaskero in the Smiley Cannery Gang 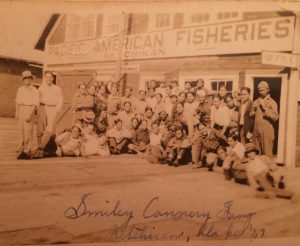 Melissa Stouffer recently shared two photographs with the Alaska Historical Society, depicting her grandfather’s time in Alaska. Roman Andres was born in Abulug, Cagayan, Philippines ca 1908. He traveled around the Pacific for several years, likely working as a migrant laborer. During this time, he joined thousands of other Filipino manongs in Alaska. Manong, or uncle, is the term that describes this early generation of Filipino-American immigrants.

Melissa knows little about her grandfather’s time in Alaska. From the photograph labeled “Smiley Cannery Gang,” we see that in 1929, Roman Andres worked at the Pacific American Fisheries cannery in Ketchikan. “Smiley” is not referring to the happy faces of those photographed, but rather the previous name of the cannery. In 1916, J.L. Smiley built the cannery in Ketchikan. Smiley previously owned and operated a cannery in Blaine, Washington. In 1918, J.L. Smiley & Co. merged with other enterprises to become Wilson Fisheries Co. In 1928, the seafood behemoth Pacific American Fisheries purchased the facility in Ketchikan. Although the cannery was not officially named after Smiley for nearly twenty years when Roman Andres worked there, from the photograph we can see that the name persisted. 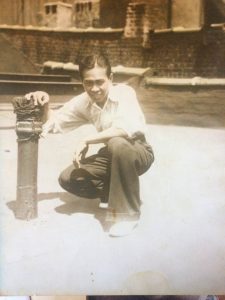 It seems that Andres was a pensionado, or a Filipino student who was able to come to the United States to attend school. He graduated from high school in New York. Later, he served in a Filipino regiment during WWII and returned to the US with a wife. Like many other Filipino-Americans of this generation, Andres worked in the food service industry. He settled in Mt. Clemens, Michigan and worked as the head chef at the Colonial Hotel. He died in 1972.

Thanks to Melissa for sharing these photos that help to articulate the deep and longstanding connection that Alaska shares with the Philippines.