Editor’s note: The column below first appeared in the Alaska Dispatch News on Aug. 18.

Allow me to begin by stating unequivocally that I support efforts by Governor Bill Walker and numerous others to place Elizabeth Peratrovich on the revised ten-dollar bill. Her tireless advocacy for Native rights has certainly earned her a place among the heroes of Alaska. 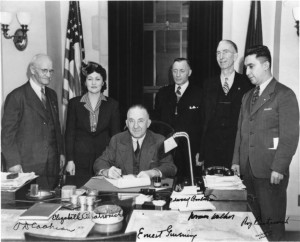 At the same time, however, we have a responsibility when honoring figures from the past to be faithful to the historical record. Unfortunately, the Peratrovich nomination draws more on myth than history.

Elizabeth Peratrovich is remembered today for her role in the passage of the Anti-Discrimination Act of 1945. The history of this act, in particular the dramatic confrontation in the territorial senate between Peratrovich and opponents of Native rights, is so shrouded in myth and has been embellished repeatedly across the decades that we know very little about what actually happened in the capitol that day in February 1945.

For example, Peratrovich left no written copy of her testimony, and the legislature in those years kept no transcripts and made no audio recordings of its committee hearings and floor sessions. So apart from a couple of quotes in a newspaper article, we don’t really know what was said by anyone. (Those of you eager to disagree should note that Peratrovich’s famous and oft-quoted testimony has no other evidence behind it and was almost certainly written and revised by others starting in the 1980s.)

There is one part of this history that is very easy to document, however. But Gov. Walker gets this wrong, too. According to his nomination letter, Peratrovich faced “absolute opposition” in the Senate and her testimony was “the deciding factor that gained passage of [the Act].”

This version of the story holds that the bill was headed for certain defeat until Peratrovich’s impassioned testimony warmed the hearts of all but the bitterest racists and carried the bill to victory.

But that’s not what happened. We need only count the votes to see that the Anti-Discrimination Bill had a majority of senators behind it even before the floor session began.

The Senate version of the bill was introduced by O. D. Cochran of Nome. In addition, when an identical bill was before the legislature two years earlier, five senators still in office in 1945 had voted yes: Frank S. Gordon of Fairbanks, Edward D. Coffey and Herbert H. McCutcheon of Anchorage, and Norman R. “Doc” Walker and Andrew Gunderson of Ketchikan. So there are six solid yea votes right off the bat.

As the bill moved through committee, two more senators—Don Carlos Brownell of Seward and Andrew Nerland of Fairbanks—reported the bill to the full Senate with a “do pass” recommendation. So now we’re up to eight yea votes.

Another three senators—John Butrovich of Fairbanks, Joe Green of Juneau, and Howard Lyng of Nome—then went on record supporting the bill when they voted to reject a poison-pill amendment offered by one of the bill’s opponents.

What all this means is that when the senators filed into the chamber and Roy and Elizabeth Peratrovich took their seats in the gallery, it was clear to anyone paying attention that the bill was going to pass with at least eleven yea votes—which is precisely what happened.

There is no doubt that Elizabeth’s testimony gave voice to Native rights and continues to inspire Alaskans, both Native and non-Native, to the present day. There is also no doubt that her many years of advocacy laid the groundwork for this and other legislative victories. But the notion that she faced “absolute opposition” is simply not true. For all the myth-making that surrounds this event today, the fact remains that Elizabeth Peratrovich could have remained seated in the gallery, not saying a single word, and the bill still would have passed.

Some may accuse me of trying to tarnish Elizabeth Peratrovich’s legacy. Nothing could be further from the truth. I’m just a historian who believes that we must always deal in facts, especially in a case such as this where doing so is as easy as counting the votes.