October 7, 1911 - The Ruby Record, a weekly newspaper, was established.

Perpetual Motion in the North 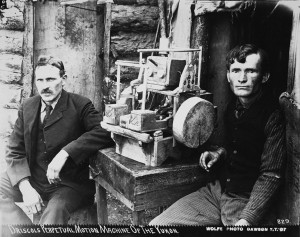 Perpetual motion has been a dream of inventors and tinkerers for millennia, and during the 1890s, when gold was discovered in the Klondike and stampeders rushed northward seeking fortunes, this fantasy of a non-stop machine that needed no fuel arrived in the gold fields. Both dreamers and charlatans were drawn to the concept, and the frauds made money selling their designs or luring gullible investors to some larger scheme. While living in Dawson the Czech traveler and adventurer Jan Welzl (widely known as Eskimo Welzl) tried his hand at building a perpetual motion water pump to keep mining shafts dry, but he was not the first.

This photograph of “Driscol’s Perpetual Motion Machine of the Yukon” (ca. 1898) shows two serious fellows displaying their dubious contraption that, one assumes, they worked on through a long Klondike winter. UAF Archives, Margaret Lentz Collection (1976-92-73).