The Cook Inlet Historical Society is pleased to announce the launch of its new, upgraded website, Legends & Legacies, Anchorage, 1910-1940, and it is now available for use by students, teachers, researchers, and the public at http://www.alaskahistory.org.  Featured are 175 individual and family biographical sketches of early residents of Anchorage and accompanying photographs (984 images).  There is a list of additional resources (i.e., libraries, archives, museums, and Native cultural centers) and online research tools for Alaska history to direct users to local, state, and regional primary and secondary sources.  The website also includes a timeline of Anchorage history.

This single use interface substantially upgrades and replaces the former Legends & Legacies, Anchorage, 1910-1935, website.  Coverage was expanded to include noteworthy individuals who lived in Anchorage prior to America’s entry into World War II.  The user interface has been redesigned to improve usability on a variety of platforms (e.g., computers, cell phones, tablets, and other devices) and the site’s search capabilities.

Each of the 175 biographical sketches ranges from one to six pages in length, excluding endnotes and photographs.  These biographies are representative of individuals from Anchorage’s founding families and others, with special emphasis on Dena’ina Indians, women, and the small number of members of ethnic groups who lived in Anchorage for an extended period during Alaska’s formative years.  There is a wide range of individuals who built Anchorage during this period, ranging from early settlers such as Jack and Nellie Brown; bankers Warren Cuddy and Harry Hamill; formerly well-known, but now obscure figures such as druggist Z.J. Loussac, educator Orah Dee Clark, business tycoon and self-made millionaire Austin E. “Cap” Lathrop; many of the City of Anchorage’s early mayors such as James J. Delaney and Oscar Gill; pioneer aviator Russel Hyde Merrill; former Anchorage fire chief Tom Bevers; and Anchorage post-war real estate developer, hotelman, and politician Walter J. “Wally” Hickel.  The site includes photographs from the Atwood Resource Center at the Anchorage Museum at Rasmuson Center, Alaska Collection at Z.J. Loussac Library; Archives and Special Collections at the University of Alaska Anchorage Consortium Library; Wells Fargo Heritage Library and Museum, Anchorage; Alaska & Polar Regions Collections & Archives, Elmer E. Rasmuson Library, University of Alaska Fairbanks; and the National Archives at Seattle, Seattle, WA.

The Legends & Legacies project is part of the mission of the Cook Inlet Historical Society to foster discussion, research, and publication of the history and ethnology of the Anchorage and Cook Inlet region of Alaska.  What began as John Bagoy’s book, Legends & Legacies, Anchorage, 1910-1935 (Anchorage:  Publications Consultants, 2001), has been developed into a popular Anchorage Museum atrium panel exhibit and, now, to the availability of an expanded number of new biographies through this website.  The redesign of the website and the posting of 175 biographies will allow the project to remain timely, with the potential for additional entries to be added or existing ones to be modified in the future.  For further information, please contact the Cook Inlet Historical Society, c/o Anchorage Museum at Rasmuson Center, 125 C Street, Anchorage, AK http://www.cookinlethistory.org/contact-us.html).

Initiated by the Cook Inlet Historical Society (CIHS), the Legends and Legacies, Anchorage, 1910-1940 website was a designated Anchorage Centennial Celebration, 2014-2015, legacy project of the Municipality of Anchorage.  With the support of the Atwood Foundation, Rasmuson Foundation, Anchorage Museum at Rasmuson Center, and the John Bagoy Memorial Cemetery Fund of the Cook Inlet Historical Society, this site was developed to provide access to selected individual and family biographical sketches of early Anchorage individuals and families and to promote Anchorage’s cultural heritage. 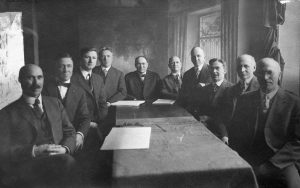 Leopold David and his family are featured on the Legends & Legacies, Anchorage, 1910-1940, website.  Born in Germany in 1881, David immigrated with his parents and four siblings to the United States in 1884, and settled in Brooklyn, New York.  In 1899, he enlisted in the U.S. Army and served during the Philippine Insurrection (1899-1902).  In 1902, he re-enlisted and was assigned to Fort Egbert, Alaska, in Eagle, as a pharmacist’s assistant.  After his discharge in 1905, he moved to Seward to became manager of the Seward Drug Company; he married Anna Karasek four years later.  He served as U.S. Commissioner at Susitna Station (1909), Knik (ca. 1910-1915), and Anchorage (1915-1921), while continuing his pharmacy business and studying law.  He worked as a lawyer in Anchorage.  In 1920, David was elected to Anchorage’s first official city council, and served two terms as the first mayor (1920-1923). 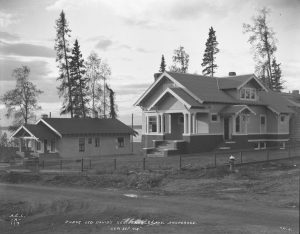 David is little noticed today, except, incidentally, for the Leopold David House that was placed on the National Register of Historic Places in 1986. Leopold David’s residence, a one and one-half story house located on the corner of 2nd Avenue and “F” Street in downtown Anchorage, was built for David and his family around 1917.  As noted in the National Register Site Nomination form (1985), his home is “an outstanding example of the bungalow style of architecture in early Anchorage” and it is considered the finest of a handful of those still left in existence.  Historian Stephen Haycox (“ ‘Judge’ Leopold David:  First Mayor of Anchorage,” A Warm Past:  Travels in Alaska History (1988), 109, said: “Too little honored today, for example, is Anchorage’s first mayor, ‘Judge’ Leopold David.  Though two streets in the Bootlegger’s Cove downtown area commemorate his service, they are tiny, and their locations are unknown to all but the most historical-minded, and the contribution of Judge David seems otherwise lost to the community’s public memory.”