The Alaska and Polar Regions Collections and Archives, Elmer E. Rasmuson Library, University of Alaska Fairbanks is excited to unveil one of the newest additions to their Rare Maps Collection. The map is titled “The Arctic Regions with the Tracks of Search Parties and the Progress of Discovery Compiled from the Latest Information” and was published by the U.S. Department of the Navy, Bureau of Navigation, in April 1896. The map was acquired in January 2014 from a rare maps dealer and was purchased with funds from the Rasmuson Rare Books Endowment. It became available to the public in mid-September. 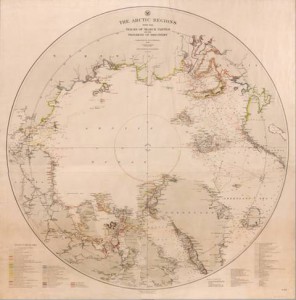 At the time of the map’s original publication, it was the most detailed overview of the history of arctic exploration ever issued in such compact form – the entire history of circumpolar arctic exploration condensed into a single map. Besides plotting the tracks and routes of 124 expeditions in the period 1734-1895, it marks the “farthest north” point attained by various expeditions dating from the 1500s through 1882, when Americans James Lockwood and David Brainerd of the Lady Franklin Bay Expedition (Greely Expedition) reached 83°23.8’N.

What prompted the Navy to publish such a map? The key lies in its emphasis on the “farthest north” points of attainment. By the 1890s, the focus of arctic exploration was no longer the search for a Northeast Passage, a Northwest Passage, or even signs of the lost Franklin Expedition. Attention instead was fixed on the question of who would be the first to reach the North Pole; a goal that remained out of reach for nearly 15 years after this map was published. Since 1882, bragging rights to the claim of having reached the farthest north had belonged to the United States, but at the time the map was compiled, that claim was being threatened by the United Kingdoms of Sweden and Norway in the form of Fridtjof Nansen’s first Fram Expedition, which had departed Norway in 1893 but by 1895 had not yet returned.

The following news release in the New York Times on 24 April 1896 announced the map’s initial publication:

Washington, April 23. – The recent revival of interest in arctic explorations, through the unfounded Nansen rumors, has caused the Naval Hydrographic Office to issue, under the direction of Commander Charles D. Sigsbee, Chief Hydrographer, a carefully prepared map of the arctic regions, with the tracks of search parties and the progress of discovery compiled from the latest information. The tracks of seventy-six expeditions are given, beginning with that of Sir John Franklin in 1845, and ending with Peary’s in 1895. Nansen’s route in 1888 is also given. The routes taken in forty-eight explorations of the arctic coasts are likewise marked. These include all such explorations from Obtzuin, a Russian, in 1734, to Peary in 1892. (New York Times, 24 April 1896, p. 9) 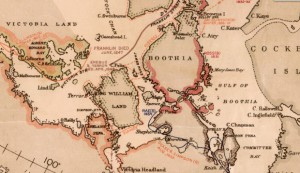 Unfortunately, the Navy’s new map was already out of date at the time of its release. Nansen had attained the farthest north latitude of 86°13.6’N on April 7 or 8, 1895, but it was not known to the outside world until his return to Norway in August of 1896, four months after the map had been made public. In 1897, the Navy released a second edition of the map that included Nansen’s achievement. Rasmuson Library does not have a copy of that map, but hopes one day to be able to locate and obtain it.

The map can be viewed at Alaska’s Digital Archives here.

To read more about this map and its relevance to understanding history, please see this October 3 article by Dermot Cole in Alaska Dispatch.