During the coronavirus lockdown, I had the opportunity to work via e-mail with Angela Schmidt of the Alaska Film Archives at University of Alaska, Fairbanks. I was interested in the archive’s copy of the 1959 nature film The Sea Otters of Amchitka, produced by Thorne Films of Boulder, Colorado and shot by naturalist H. Robert Krear. It is the first completed documentary about the animals, and, having just finished a book on sea otter history but not having known about the film, I was very eager to get a glimpse of it. Luckily, despite the somewhat degraded state of the AFA’s print, Angela was able to digitize The Sea Otters of Amchitka and upload it for me to view. 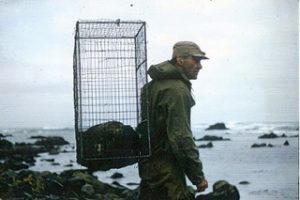 At the same time, I was also in contact with Dr. Oakleigh Thorne of Thorne Films, who shared information about his work with Krear on the project. With gracious permission from “Oak,” now in his 90s and still going strong, Angela made the video clip public. But Dr. Thorne didn’t stop there. Searching his decades of records from hundreds of nature films produced by him beginning in the 1950s, he was able to locate a higher quality copy of the The Sea Otters of Amchitka and donated it to the AFA for digitization. This copy can now be seen on YouTube. https://www.youtube.com/watch?v=_bcS2HgetEE&feature=youtu.be

At the middle of the twentieth century, Amchitka was home to the largest concentration of the animals in the North Pacific. The opportunities that the otter population at the island provided for research were complicated by Cold War plans to test nuclear weapons there, a project that, following complaints from conservation officials, was halted until the 1960s. In the meantime, Fish and Wildlife Service biologist Karl Kenyon was working to transport sea otters from Amchitka to other locations in the Pacific to try to reverse some of the disastrous effects of the maritime fur trade. Animals were also flown from the island to Seattle’s Woodland Park Zoo beginning in 1954, where the first otters held in captivity in an American facility were displayed.

While at Amchitka in 1957 assisting Kenyon’s conservation efforts as a University of Colorado doctoral student, Krear was tasked with shooting footage for the documentary, with film provided by Thorne. He also narrated the The Sea Otters of Amchitka during final production in Colorado. Unfortunately, Krear, passed away in 2018, so I wasn’t able to talk with him about his work, but he did publish a memoir in 2006 titled Four Seasons North: Exploration and Research in the Artic and Subarctic, edited by Terri Garrett, with a section on his time at Amchitka. It offers a somewhat dry but intriguing account of his daily activities on the island, working with Kenyon and several others, including an Aleut Native assistant named Innokinty Golodoff. Their main task was to build a holding pen and capture sea otters for transport to Seattle and the Pribilof Islands. Sadly, all of the otters that left Amchitka by air perished before they could reach their destination. Nevertheless, the lessons learned allowed scientists to perfect translocation methods from the island, which proved largely successful for recovery of the animals throughout the Pacific Northwest in the decades to come.

Krear and Thorne were well aware of the sea otter’s value as a nature film celebrity. While The Sea Otters of Amchitka may have only been seen by conservation advocates and in educational settings prior to the closure of Thorne Films in the early 1970s, the production began the process of popularizing the endearing animals. Near the 34 minute mark, Krear predicts, “In the future it is hoped that the value of this animal to the world will be chiefly aesthetic, but biologists and conservationists anticipate difficulty in promoting this viewpoint.” Such concerns proved fleeting. As Krear noted simply yet poignantly about the film in his memoir years later, “Jacques Cousteau made one later.”