STARR in the wake of DORA: Mail Ships of the Aleutians

Back in the day, in Alaska anyway, mail ships had personalities that summoned devoted fans who enthusiastically met each arrival at the dock. The mail boat brought not only first and second class mail, but current newspapers, fresh foodstuffs, cargo and most importantly, people. Teachers, doctors, priests, and loved ones returning home. These ships of yore spawned legends and myths along Alaska’s thousands of miles of coastline and river fairways for their bravery and courage in bucking impossible storms and treacherous waters to deliver the goods. Their stories live on in the many children named after them and as research favorites for many historians: Nathaniel Philbrick obsessed about the ESSEX, Patrick O’Brian had the SURPRISE, and Michael Burwell is devoted to the POLITKOFSKY. I’m enamored of the DORA. It must be a sign of modern times that these days we don’t even know the name of our mail man or woman, much less the make or model of the mail truck or even whether our precious letters arrived by cargo container ship or airplane! But this story is about the mail ship who took on the Westward run−Seward to Adak and Bristol Bay−following the DORA’s demise in 1920.

Out of the blue one day I received a message from a woman who said she had been aboard the last Aleutian mail boat on its final voyage south out of Seward bound for Seattle in the summer of 1938. She said her father, Capt. Percy Roy Selig had served as an officer on the ship and that his nick name was Blacky. That got my attention. I told her my father also served on Alaskan vessels and that his nickname was Whitey. Joy McNulty and I have become friends through our seafaring fathers and the ships they sailed on through Alaskan waters. Just recently she sent me the narrative her father wrote in 1935 and her memoirs of that 1938 voyage about the mail ship SS STARR. 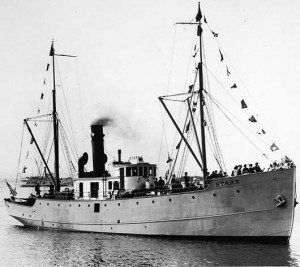 The ‘gallant little mail ship of the North Pacific’, the SS STARR shown here, probably in Puget Sound, prior to 1922. Here her back deck is low and a dory is visible. Photographer unknown. (Courtesy Michael Burwell Shipwreck Files.)

The steel-hulled steamer STARR was designed and constructed in Seattle in 1912, at the massive shipyard on the East Waterway of the Duwamish River by the J.F. Duthie Company. J.F. hailed from the famous shipbuilding family of Aberdeen, Scotland. A top of the line trawler with a gross tonnage of 525, overall length about 132 feet, a beam of 26 feet and depth of 20 feet, the STARR boasted a 650 horsepower steam engine and a covered deck, called a ‘tween deck, where fishermen could process their catch sheltered from the weather. This was innovative for its time as was the installation of a wireless radio. The vessel was commissioned by the San Juan Packing Company of Seattle, a large outfit that dispatched fishing craft up and down the Gulf of Alaska.

“She built to fish halibut and carried either 12 or 14 dories. Halibut was caught from the dories at the time and was the last word in halibut vessels,” wrote Capt. Selig. “She was a fishing vessel from 1912 to 1922.”

Her career as the beloved mail ship revived the postal service in Alaska which had fallen into disarray after the DORA had been removed from service and purchased by Lars Mikkelson and the Bering Sea Fishing Company of Seattle in 1918. It’s not beyond belief that the DORA and the STARR crossed wakes on their journeys between Seattle and Alaska, perhaps even within hailing distance, during those years. Tragically, the DORA sunk off Port Hardy in the winter of 1920. The mails were shipped erratically to a grumbling Alaska for nearly four years until 1922.

The ninth territorial governor, Thomas J. Riggs, Jr., happily wrote in his 1921 annual report to the Secretary of the Interior:

“During the last three of four years mails between Seattle and Alaskan ports have been carried by freight and express, but under the present administration postal-clerk service on these boats has been restored…under the merchant marine act with the San Juan Fishing & Packing Co.. who now operate the steamer Starr from Seward via Seldovia and intermediate points to Unalaska, and to Nushagak and Dillingham during the season of navigation in Bering Sea. This boat operates on a regular schedule, leaving Seward about the 10th of each month in close connection with the steamers of the Alaska Steamship Co. The steamer Starr is equipped to handle a considerable number of passengers, has a wireless telegraph apparatus, etc., and is giving the Alaska Peninsula excellent service.”

“The San Juan people had her built up on the end where the dories were nested. This created rooms for 27 first class passengers, if you could call it ‘first class’,” explained Capt. Selig. “There were 3 high bunks in a room about eight feet long and maybe 4.5 feet wide which included the 2ft wide bunk. There was a little washbasin with a cold water faucet. The head was down the alleyway and shared. There was also the former fisherman’s forecastle in the bow which was used for ‘steerage’ passengers. There were either 16 or 19 bunks. There were also ‘standee’ bunks that could be set-up in the ‘tween’ deck on the area aft of the hatch. The STARR was certified for 56 passengers. She carried nearly 309 tons of mail and cargo. She often carried more passengers as she was the only ship going to the islands.”

One of Joy’s mementos from the final voyage of the SS STARR is this letterhead. “This stationary was in every passenger ship so the passenger would fill in the name of the ship,” she wrote. (Courtesy Joy Selig McNulty Collection.)

His description of the crew quarters aboard the 132 foot vessel wasn’t much better. “The skipper’s room aft of the wheelhouse was only fair. It had a decent single bunk and a desk plus a small settee. No head. The chief engineer, 1st officer and purser also had small rooms on the mail deck. The rooms were probably 4.5 feet by 8 feet with the bunk taking up 2 feet of the width. The 1st and 2nd engineer had only ship bunks in their room. The room was only 6×8 feet with the bunks taking up 2 feet of the width. She also carried a mail clerk who handled all the mail was begin delivered.”

The mail clerk of those years was one A. B. Hicks who may have been one of the most popular men in the Aleutians as he personally sorted and delivered the mail by hand, after many a treacherous trip in the ship’s dinghy to gravelly shores like Nikolski and other dockless villages. The headline of a 1936 feature story that made the rounds on the West Coast Marine Intelligence route said it all:

When Alaskan Mail Must Go−We Take It In!

The steamer STARR was also fortunate in her roster of officers. Capt. Selig, himself descended from a long line of ship’s masters and commanders from the famed shipping port of Lunenburg, just south of Halifax in Nova Scotia, was born in that port in 1902, and came of age amidst the bustle of shipbuilding and sailing on the eastern seaboard. His career as an officer spanned the transition of sail to steam, the opening of the newly dug Panama Canal, and the explosion of shipping as the Pacific ports expanded and grew during WWI. The Alaska Steamship Company was a major player in that era. They bought the STARR in 1935 from San Juan Packing Co. but kept the vessel on the Westward mail route. And they signed on Capt. Selig as her 2nd mate.

“There was a bout a foot of cement the full length of the vessel bottom except under the engine room,” Selig wrote, “Over the years this cement served in good standing as the STARR scraped her bottom over a few rocks in her day.” Beachings and groundings were common occurrences in the days when navigation charts were still made by hand. Most men who became masters and captains carried their own marked-up charts with them from berth to berth. Of course it was always best for a ship when her officers knew not only the coastline but also the whims of the vessel. Working his way up to the bridge was Captain E. Christian Trondsen, who had sailed on the STARR in various capacities, the last as 1st mate for  eight years before commanding the ship. Another long-time mariner was Chief Engineer Arthur Sheridan who’d been aboard for six years.

“Her last Captain was Christian Trondsen who took command in the spring of 1935 and remained until they took her off the run July 1938,” Selig wrote proudly. “During those years there never was an accident.”

In 1938 the Alaska Steamship Company was in financial straits and began culling their fleet. The STARR was sold in 1938 to the United States Army. Her small crew quarters and cramped staterooms were sloughed off as she served her country as a working barge for the next few years. It was on her final voyage south, across the Gulf of Alaska and through the incomparable Inside Passage that became the trip of a lifetime for Capt. Selig’s daughter Joy.

“The Alaska Steamship Company had a rule that families could not travel on the same ship with any family member who was a member of the crew. However they made the exception in this case,” Joy explained. “Since the ship was not carrying any paying passengers or cargo they allowed the families of the men to travel on the ship and the family possessions were carried as cargo. This saved the company considerable money.” Here she is referring to the employees and families of the company who likely lived in Seward if not year round to service the company ships, then at least seasonally. The weeklong voyage in the peak of summer weather through the most exquisite coastal region of the Pacific has stayed alive in Joy’s memory all these years.

“The trip was really great as the weather was perfect and the stop in Ketchikan was special because it was the 4th of July. With all the adults and children on board it was like a family cruise from Seward to Seattle. The water was calm and with sunshine everyday during the long trip no one got seasick and the crew played with the children on deck like a big family event,” she said.

Epilogue: The STARR’s story ends here as her history is subsumed amongst the papers of the army maritime transport division. It is said she was used hard as a barge and eventually scrapped of her usable parts then sent to the breakers yard in 1940.

I am diligently working on chapter 3 of the biography of the DORA. — the author

Alaska Governor’s Annual Report to the Secretary of the Interior, 1922.