Inside an abandoned storage unit auctioned off in Everett, WA, last year, the successful bidder found, among other things, a folder that included some high school football programs dating back to the early 1950s and a small, 6 by 4 inch, yellow metal plate: a 1949 Alaska non-resident fisherman’s license. Not recognizing the item, he reached out to the Alaska Department of Fish and Game. They didn’t recognize it either and turned to members of the Alaska Historic Canneries Initiative. Just what is this old fishing license plate all about anyway? 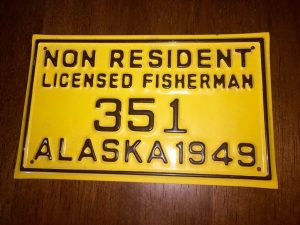 A quick historical review turned up nothing in the federal Fish & Wildlife or Halibut Commission regulations that explain the plates. But a deeper look into the territorial records suggest a story that begins with the formation of the Alaska Department of Fisheries, the growing Alaska statehood movement, passage of new fish tax legislation, and ends up in the U.S. Supreme Court.

First to back up a bit, the years after World War II saw rapid growth of the Alaska statehood movement. The Territorial Legislature took a number of steps to organize and fight for Alaska interests. Among these, in 1949, was creation of the Alaska Department of Fisheries. The first Fish Board was appointed and Clarence L. “Andy” Anderson was named its first director. The Territorial Legislature appropriated $250,000 for the new department.

But how could Alaska pay for it? The territory already taxed fish catches. Back then, salmon played the role that oil later played. Fish taxes provided 80% of the revenues for the territorial government and the services it provided. Salmon canneries generated most of that: 4 percent of the value of raw fish. Fish traps were also heavily taxed: $1,200 per trap permit, plus 5 to 25 cents per fish on top of that, depending on volume, and even more. This was partly punitive. Alaskans hated fish traps and taxing them heavily was a profitable way to discourage traps. 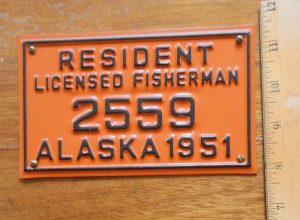 Complicating matters, salmon runs – and raw fish tax revenues – declined sharply after the war. The Legislature formed the new Department of Fisheries to reverse that decline and encourage more local participation in the fisheries. On the same day the Territorial Legislature created the Department of Fisheries, March 21, 1949, they also approved a new tax on commercial fishermen: $5 for resident fishermen and $50 for non-resident fishermen.

It was a huge success. In its first full year of implementation, 1950, the tax on fishermen raised $290,000, enough to pay for the new department and more, and 86 percent was paid by non-residents. However, the wide disparity in the tax rate for resident and non-resident fishermen immediately raised legal red flags. Preferences like this and other popular “local hire” laws quickly run afoul with the U.S. Constitution’s protection for interstate commerce.

The Seattle-based Alaska Fishermen’s Union immediately sued the territory in what became known as Mullaney v. Anderson, the latter being Andy Anderson, the new director of fisheries. The Territorial District Court initially upheld the tax. Alaskans generally thought non-residents who made their livelihoods in fishing, mining, and other extractive industries, should pay more. But on appeal, the 9th Circuit Court soon reversed that decision. And with incredible speed, the case went before the U.S. Supreme Court in the spring of 1952.

The territory raised a variety of legal arguments in support of the tax differential, including that Alaska was a territory, not a state. But Chief Justice Felix Frankfurter rejected them all. He agreed with the 9th Circuit that the same constitutional provisions for interstate commerce also applied to territories, and ruled the different tax rates for resident and non-resident fishermen violated the Privileges and Immunities Clause of Article IV, 2 of the U.S. Constitution. After losing its case, the territory continued to levy the tax but dropped the rate to $5 for all fishermen. Non-resident fishermen later received refunds for the years they were overcharged.

I’m convinced the storage unit plate is connected to the 1949 tax. The plates showed fishermen paid their taxes, much like similar plates and stickers we use today to show fishermen have registered their boats, paid harbor fees, and whatever. Nothing in the 1949 law mentions license plates, but nothing else in the territorial, federal, or halibut commission regulations for that year explain them either.

If so, it begs the nagging question, why then are these plates so rare? I have lived and worked in Alaska fishing communities for 38 years had never seen one of these before. I’ve seen old triangle plates, APA asset tags, and more attached to old fishing boats but never one of these. A friend later showed a picture of a 1951 resident plate, but up to 14,000 fishermen fished annually in Alaska waters during these years. If each needed one of these plates, there should be scads of them around.

Obviously they didn’t. For the Territory, it would seem to have been easier and more efficient to administer this tax on paper. The canneries keep records of their fishermen and could deduct the tax from their pay as they did other expenses. So who still needed a license plate? Perhaps they were used more selectively, such as for trap watchmen who are mentioned in the law. Or maybe others?

Know anything about these plates? Have a better theory about who might have been required to have one? If you have any information about these plates, the Mullaney case, or just an opinion, please let us know. History grows when it is discussed and debated. More background about the Mullaney v. Anderson decision can be found at http://caselaw.findlaw.com/us-supreme-court/342/415.html.

Mullaney wasn’t the end of this story. Decades later, a similar case was filed when the state charged non-resident fishermen three times more than residents for commercial fishing licenses and permits. Known as Carlson v. State of Alaska, the courts eventually also found for non-resident fishermen for similar reasons as in the 1952 decision. They ordered refunds that totaled over $30 million in principle and interest. Unlike the speed of Mullaney, this case dragged out for decades. Carlson was filed in 1984 and after five remands wasn’t finally settled until 2012.

Special thanks to Jim Mackovjak of Gustavus who shared his Sitka friend’s photo of the 1951 resident license plate, and provided the critical link to Mullaney v. Anderson.