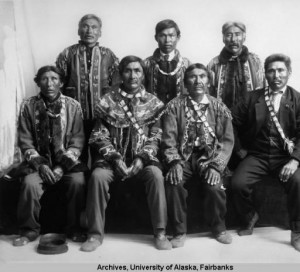 One hundred years ago this month (July 5-6, 1915), Native leaders from the Tanana River gathered in Fairbanks to meet with government officials and express their concerns about the impingement of White prospectors and settlers on their hunting grounds. Present at that meeting were representatives from Tanana (or Ft. Gibbon), Crossjacket, Tolovana, Minto, Chena, and Salchaket. Government officials included Judge James Wickersham, Thomas Riggs of the Alaska Engineering Commission, C.W. Richie and H.J. Atwell of the United States Land Office, and the Reverend Guy Madara from the Episcopal Church. (A full list of participants can be found in the transcript of the meeting at the Alaska State Library, ASL-MS-0107-38-001.) This was not the first gathering of Native leaders to express concerns about the impacts caused by the newcomers (1898 Juneau School House Meeting and a 1913 or 14 meeting in Tanana). However, this meeting stands out for several important reasons.

The 1915 Tanana Chiefs meeting is the first public occasion for Interior Natives to discuss their issues in their own words with government officials. Before this meeting, others had spoken for them expressing their understanding of Native conditions and needs. Preceding this historic meeting and earlier in the summer, Judge Wickersham had met with Chief Charlie and Chief Alexander on the lower river and together they made the plan to hold the meeting in Fairbanks and listed some of the leaders to attend. Wickersham arranged the meeting to coincide with the laying of the cornerstone for the University and the Fourth of July celebration. The meeting was recorded by a stenographer; photographs were taken by a professional photographer; there was an article in the newspaper describing the proceedings, and Wickersham reported the proceedings to the Secretary of the Interior in Washington D.C. In these ways, Wickersham insured that this meeting and the concerns of the Native leaders would be heard and preserved for future reference.

The Indian leaders were eager to discuss possible solutions to the problem of protecting their land and way of life. One year earlier, President Wilson had signed the Alaska Railroad Act and the government officials warned that it would be hard to protect Native land rights with the expected development the railroad would bring to the Interior. Wickersham encouraged the leaders to consider the two legal options available to them: Native allotments or reservations. In eloquent terms, the leaders described how both were incompatible with their hunting and fishing life that called for unrestricted access to hunting, fishing, and trapping areas. There were other concerns. The Native leaders called for medical assistance, education, particularly in the form of industrial schools, and they asked to be informed about events affecting their lives and livelihood such as opportunities for wood cutting contracts.

In a very fundamental way, the Native leaders were asking for a relationship with the government and the means to attain rights, opportunities, and control of their affairs in the new realities they were now facing. In just fifteen years they had watched their world change dramatically with the coming of prospectors and the attendant development of the Tanana valley. Ironically, the Indian groups living on the Tanana had traded on the Yukon for many years before the gold rush but had maintained a homeland intact from White settlement. With gold discoveries in the Tanana Valley, development of Fairbanks as a supply center, establishment of the Valdez Trail, steamboat traffic on the Tanana River, and the telegraph line, life changed drastically. Where once the Indians had guided and rescued military explorers, now the Indians were considered unimportant to the development interests of the country. David Jarvis, the Customs Agent at Eagle noted the change to Senator Dillingham’s Senate committee investigating conditions in Alaska in 1903. He sadly noted that after the gold rush, Alaska had become “a white man’s country.”

This is what makes the 1915 meeting so important. Wickersham and the Native leaders who gathered in Fairbanks began a public dialogue about the government’s responsibilities to Native people, a responsibility that went back to the Treaty of Cession in 1867 and has evolved to the present. The chiefs’ meeting reminded the government and the public of that responsibility and the difficulties of addressing Native concerns. Resolution of land claims would take years to resolve but anyone looking back at this meeting can see that it offers all of us a way to assess what has been gained in many areas over the years and that it represents a beginning point in efforts to address Native needs in a multi-cultural world. As Native leaders today attest, there have been gains but there is much work to be done.