Note: The following was written in the Fall of 1976. No salmon canneries remain on Ship Creek today.

This cannery is a direct link to a large part of Alaska’s past – the salmon canning days. Starting in Southeast Alaska in 1878 and growing to a peak in 1936 with a pack of 8.4 million cases, the salmon canning industry has had a powerful impact on the economic and sociological development of Alaska as a territory and as a state. Today the industry still plays an important role in the Alaskan economy, providing summertime employment for people from remote area and market for fisherman to earn the money they need to sustain them throughout the remainder of the year. Many of these peoples live in the bush year-round or are Natives in remote villages and settlements who fish for subsistence.

It was a mix of people such as these that I met and worked with during three summers of employment at the Anchorage cannery; 1974, 1975, and 1976. Mostly set-net fisherman, they fished the upper Cook Inlet shorelines, intertidal areas and Susitna River delta. Fishing in 25 to 30 foot tidal fluctuations and murky brown water they tended their nets with outboard powered skiffs, delivering their catch to the cannery or to the shallow draft scows and tenders that operate in the inshore areas of upper Cook Inlet.

The catch from these fisherman is canned at the Anchorage cannery. First built in 1931, and operated by H.J. Emard as Emard Packing Company, Inc., it survived a period of which I know little of its history. Johnny Bumanglag, the fish house foreman, and Joe, the present-day retort operator, are still working from the 1930’s when Emard first starting canning salmon there. In those days the F/V Henry J. served as a tender to upper Cook Inlet fishermen, taking out the scows in the spring, picking up in the summer and returning them to the cannery in the fall.

Ship Creek, the waterfrontage of the cannery, is not too aptly named since few ships (or boats) can operate in a channel that fluctuates from 1 to 31 feet in 12 hours or less. Only flat bottom vessels or vessels with hulls strong enough to withstand several beachings during the course of a visit can “tie up” to the cannery dock. Large flat-bottomed vessels are often brought into the mouth of the creek and unloaded next to a concrete ship that is permanently dug into the Terminal Yards fill at the mouth of Ship Creek. 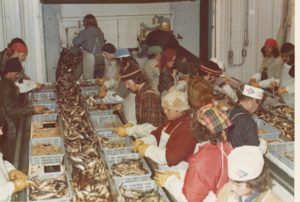 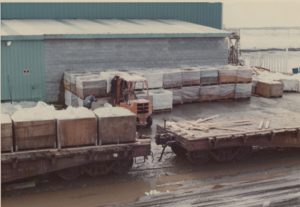 Fish arrives via rail to the Whitney-Fidalgo cannery in Anchorage in 1972. Photo courtesy Dexter Lorance.

The cannery is a collection of rather jostled and dilapidated old buildings and trailers that show their age and the fact they suffered through the Alaska earthquake of 1964. Inside the canning line warehouse, the can shop normally on the second floor of canneries, rests at the same level as the canning line, a result of the floor collapsing beneath it during the earthquake and cannery economics dictating it to be left there as long as it worked. No wonder one can walk along a wall in the warehouse and come upon a window in the wall whose top edge is below the waistline.

A small group of people live on the premises, similar to remote area canneries that are complete settlements in themselves, but the majority of workers commute from within the city. The machinist crew, Filipinos and office workers are brought in from the lower 48, and rest of the crew is hired from the local work force. Some of them have been working canneries for many years, such as Minnie who lives in Wasilla and commutes to work, often staying and sleeping in her car when working into the wee hours of the night.

Squeezed between Elmendorf AFB, Terminal Yards and downtown Anchorage you can almost hear the cannery breathe a sigh of relief to be connected on a waterway to the open ocean waters. The city is moving in all around. Much of the property the cannery is located upon is on old fill from early day excavation projects in surrounding areas. Jutting into this fill and coming right up to the cannery road, is little estuarine bay of vital importance to the cannery. Along the edges of this small embayment are skids upon which the fish scows are placed in the wintertime to protect them from the freeze up of upper Cook Inlet waters. The scows are placed out in the spring at strategic locations on the east side of Cook Inlet from Boulder Point to Fire Island and on the west side from Tyrone to West Foreland. The fisherman, notified of openings by radio and written notice, net and recover the salmon and deliver their catch to the scows. There they are covered with wetted burlap to keep them cool and protected from the wind, sun and seagulls. The fisherman return to their camps and a tender from the Anchorage cannery comes on a regular schedule to pick up the fish. All five species of Pacific salmon ae caught in upper Cook Inlet with reds and pinks making up the majority of the catch.

Counts are kept of the number of each species from each bin and a fish ticket is written up for the fisherman registered to that bin. Back in the cannery office the fisherman will be credited with an amount equal to the number of each species landed, times the average weight of that species that week as determined by a negotiating board or an Alaska Department of Fish and Game sampling crew.

The scows are the only logical low cost way to service the fish camps along each side of upper Cook Inlet. Requiring little maintenance, each scow can accommodate the fish from several individual fish camps along that stretch of the shoreline and minimize the time the tender needs to pick up the fish. These fisherman have banded together into the Upper Cook Inlet Fisherman’s Association and it is this group that Whitney-Fidalgo officials must bargain with each year for the prices and contracts to fish. Other processors compete for the fish in the area, with Kenai being the most popular alternative landing site.

During the peak of the run it is not uncommon for the F/V Totem (the modern day replacement of the Henry J) to return to the cannery loaded to the brim with pink, red and silver salmon. Often times having 20,000 or more fish in its holds, the Totem will bring in two such loads a week. This is when the people in the canneries earn their salt. With no holding facilities for this mass of fresh product, except for a few chilled seawater bins that act as temporary storage silos, these fish must be canned.

The machinery has got to operate correctly and the people must work until the job is done. If the cannery superintendent could find robots to man the machines at time like these he would be satisfied. Instead they often bend to the fact that real human people work at the cannery and they often knock off work just after midnight to allow the cannery crew some sleep (often averaging less than 6 hours) before starting up the cannery again the next morning to can more fish. The times of working past midnight do not usually last more than 8-10 days at a stretch and thank heaven! You can only like salmon, working and making money just so much. Then there is your body to consider.

The cannery becomes a world unto itself. Those of us that lived there would seldom wander even up into downtown Anchorage – less than one mile away. The entire plant and its operations became dependent upon the outside connection of the ALASKA railroad, delivering the tin ends and can bodies and taking away the still cooking pallets of canned salmon. The warehouse of the cannery is so small and lacking in floor space that if the pack was not removed daily by rail cars and new ones spotted at the doors, the pallets would be stacked on the floor and this accumulation could shut down the cannery operations within 24 hours.

The effluent from the cannery operations is discharged into Ship Creek. Thousands of pounds of offal – everything on the fish that is not canned or salted – is ground up and mixed with water to form a slurry. This slurry is piped to below the mean low water mark on Ship Creek to meet the Environmental Protection Agency’s effluent permit and released. There the ever-hungry, opportunistic seagulls find it.

In the summer, on low tides one can always tell at a glance whether or not the cannery is operating by the presence or absence of large numbers of seagulls alighting on Ship Creek just below the cannery, floating downstream bobbing and ducking for the salmon offal and screaming, screeching and fighting amongst themselves. The gulls, mostly California gulls, roost upon the mud flats below downtown Anchorage and feed upon the cannery effluent. Streams of gulls capitalize upon this food, forming a steady circle from the mouth of the creek up to the discharge pipe.

It is quite a spectacular sight – I have seen feeding congregations of 5,000 or more seagulls below the cannery. Some of the gulls are huge and will attack unsuspecting humans! I have two documented cases of seagulls attacking people in the Terminal Yards area. My guess is more people have had the experience, but are afraid to reveal it for the sake of ridicule. Who has ever heard of such a thing – dive bombing seagulls, noiselessly heading for your head? Often times they drop a little package as you dissuade them to leave. Alaska is full of animals that will attack, but seagulls – without provocation?

As sudden as they start, the salmon runs in upper Cook Inlet start to diminish. The Alaska Department of Fish and Game begins to limit fishing time, catch per unit of effort decreases and the fisherman cease fishing. It is more profitable, or less expensive for them to resume other activities. They close up the fish camp, move back to the city or the bush and wait until next season. Life at the cannery continues with the necessary clean up, machinery maintenance, final shipments of canned salmon and recovery and storage of the scows for the winter.

The last week of August is traditionally the time when the scows are towed back to the cannery dock by the tender, moved at high tide by the beach gang in a small runabout to the foot of the skids, and winched up by the old authentic looking steam engine. There they are secured and left for the winter. The tender leaves and goes south for the winter before the freeze up as does the cannery crew. The buildings are boarded up to await the next spring and beginning of another salmon canning season.