Benny Benson: An Alaska Kid Who Made History 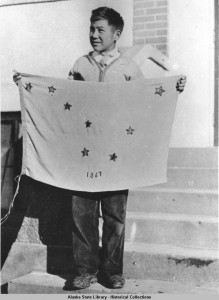 Before 1927, Alaska did not have a flag. At the time, Alaska was still a territory, meaning that the federal government controlled Alaska and its citizens lacked voting representation in Congress. Since Alaska was purchased from Russia in 1867, Alaskans had flown only the U.S. flag. But in 1926, Territorial Governor George Parks thought having a flag would help Alaska become a state. He persuaded the Alaska American Legion to hold a contest open to all Alaskan children grades 7 – 12 to design Alaska’s new flag. By January of 1927, the contest rules were circulated to schools throughout the territory. One of the students participating in the contest was thirteen year-old Benny Benson. 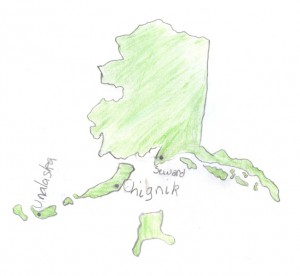 Benny Benson’s roots came from all over the world. He was born in Chignik, a small fishing village on the south shore of the Alaska Peninsula. His father, John Ben Benson, was a Swedish fisherman and his mother, Tatiana Schebolein, was an Aleut-Russian. He had a younger brother named Carl, and an older sister name Elsie. When Benny was only three years old, a terrible tragedy struck his family. A devastating sickness swept their village, and Benny’s mother died from pneumonia. Not long after they lost their mother, the family’s house burned down in a fire. These terrible events forced John Ben Benson to separate his children. Elsie was sent to a school in Oregon, while Benny and his brother were sent to an orphanage in Unalaska. The orphanange was called the Jesse Lee Home.

Hundreds of Aleut orphans lived at the Jesse Lee Home. But because their orphanage was located so far away and unable to serve other Alaskans, in 1925, the Jesse Lee Home moved to a larger facility in Seward, on the Kenai Peninsula. Two years later, Benny Benson was a seventh-grader at a territorial school at Seward when he entered his flag design. From his little desk, Benny created a scene familiar to every Alaska child who gazes skyward – the seven stars of the Big Dipper and the guiding light of the North Star. On his design submission, Benny explained the scene for the judges: “The blue field is for the Alaska sky and the forget-me-not, an Alaska flower. The North Star is for the future of the state of Alaska, the most northerly in the Union. The dipper is for the Great Bear – symbolizing strength.” 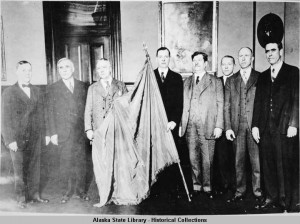 Of the 142 submissions, a panel of judges all agreed that Benny Benson’s design of eight stars of gold placed on a field of blue was the winner. In May 1927, the two houses of the territorial legislature adopted the flag design. Alaskans flew the flag for the first time on July 9, 1927. During the ceremony in Seward, Benny was awarded a watch with the flag emblem on it and a $1,000 educational scholarship, which he used to study diesel mechanics.

Benny’s artful creativity was most definitely inspired by his own life’s experience and hardships, but his remarkable contribution to Alaska history also encouraged his fellow Alaska Natives, who had received citizenship and the right to vote only four years prior to Benson’s win. Not surprisingly, Alaska Natives who had struggled with their own stories of tragedy and loss, saw in Benny and his flag symbols of enduring strength. 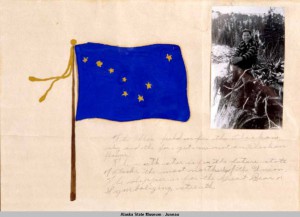 When Alaska achieved statehood in 1959 Benny Benson’s territorial flag became the official state flag. The original flag – made of blue silk and hand-sewn gold stars – Benny’s original design, and the watch he donated in 1963, are all housed at the Alaska State Museum. In 2002, at the opening of the Alaska State Museum exhibit commemorating the 75th anniversary of the flag’s adoption, Alaska Lieutenant Governor Fran Ulmer recognized Benny Benson: “Benny Benson made a tremendous impact on Alaska history when he submitted his entry that featured the Big Dipper and the North Star. His story is a wonderful example of how one young person can really make a difference. The flag story continues to remind us of the importance of listening to the ideas and opinions of young people.”

Since 1927, Benny Benson’s design has delighted Alaskans, especially children who are inspired by his story. The city of Kodiak honored their unassuming resident by naming for him “Benny Benson Drive,” and the Alaska Plant Materials Center released a variety of Kodiak wild grass named “Benson beach wild rye.” Anchorage honored Benny with “Benson Boulevard,” as well as the Benny Benson honor at Mile 1.4 of the Seward Highway. Finally, it was the poetic way Benny described the images appearing on his flag design that inspired Elinor Dusenbury and Marie Drake to write and compose Alaska’s state song. Today, communities throughout Alaska continue to celebrate Alaska Flag Day by retelling the story of how one creative Alaska kid made his mark on history.