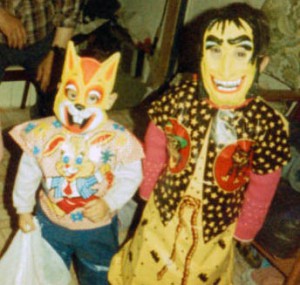 When howling winds reduce birch trees to skeletons, croaking ravens return to hollowed woods, and creeping termination dust bask burnt-orange mountains in a ghostly glow, it must be October in Alaska.  October not only brings chilling weather but one of the world’s most beloved and ancient holidays, Halloween.  In Alaska that holiday arrived late, brought by immigrating Americans after 1867. Still, most Alaskans have embraced Halloween, and its signature pastime, telling ghost stories.

For centures, Catholics observed ‘All Hallows Day’ on November 1, and considered October 31, ‘All Hallows Eve,’ the Day of the Dead. The Russian Orthodox Church, however, celebrated its saints in June, and according to Jenya Anichenko, “ghosts were a foreign concept.” But after Russia officially transferred Alaska to the United States on October 18, 1867, rumors spread that the ghost of a beautiful Russian Princess haunted the abandoned Baranof Castle in Sitka.  “Just the habitation,” noted The New York Times in 1883, “for historical and aristocratic ghosts.” 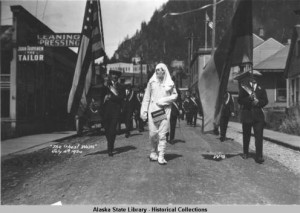 The article reported that the so-called “Ladyin Black” was the daughter of a Russian-American governor who had been forced to marry a man she did not love so she killed herself on her wedding night.  Her sad spriti – draped in diamonds and donning a long black trailing robe – supposedly wandered the deserted castle during the midnight hour.  But as Dee Longenbaugh, proprietor of Juneau’s Observatory Books, points out, “the managers after Baranov were all young men and their children were babies or toddlers.  Unless a five year old killed herself for love there could be no truth to the legends.”

Propsectors of the famed Alaska Gold Rushes also told their share of ghost stories about forlorn females.  Local legend says that a man known as “Klondike Ike,” checked in the Golden North Hotel in Skagway with his fiancee, Mary.  The next day Ike set out in search for gold, but never returned.  A devastated Mary locked herself in her room on the 3rd floor of the hotel and eventually died.  Patrons occasionally report sightings of “Scary Mary” in the corridors and hallways.  Accordingly, she appears as a shadowy apparition, peering out of windows, looking for her long-lost Ike.  It should also be noted that virtually the same story is told about the Golden North Hotel in Fairbanks.