Making History Above the Copper Belt 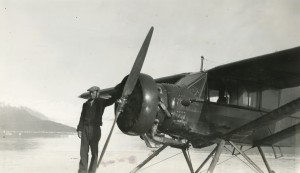 The Wrangell Mountain Skyboys are exemplified by pilots whose names are familiar to even the youngest Alaskan:  Charles “Harold” Gillam, Merritt D. “Kirk” Kirkpatrick, Merle “Mudhole” Smith, and Bob Reeve, “the Glacier Pilot.”  Despite their complicated rivalries and relationships, their reliable service to eastern Alaska eventually formed the primarily stops along a regularly scheduled flight route in the Wrangell Mountains called the “The Copper Belt Line.”

To Alaskans, these 1930-era bush pilots stood shoulder to shoulder with the sourdough as the new face of the Last Frontier.  “Next to the Gold Rush miners of ’98,” declared aviation enthusiast Stephen E. Mills, “these men—pilots, mechanics and the farsighted entrepreneurs who supported them—did more than any other group to open Alaska to civilization.  Many of these air pioneers … gave their lives blazing new trails in the sky and paving the way for the growth of the 49th State.”(1)

To a nation plagued by economic despair, Alaska and its heroic aviators were thrust into a powerful, twofold position:  Bush pilots were seen as pioneers, instrumental for bringing reliable and safe air service to the Alaskan mainstream, while at the same time, they were perceived in the popular imagination as symbols of frontier rugged-independence. 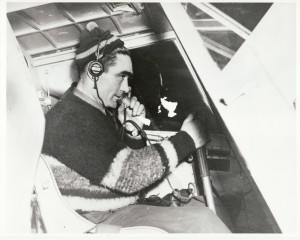 Harold Gillam seated inside his Pilgrim airplane, getting ready to deliver the mail. #95-46-95, courtesy of the Cordova Museum, Cordova, Alaska.

The strikingly handsome and reportedly “moody” Harold Gillam probably most represented the Skyboy’s image of the “strong and silent type.”  Asked to write a poem about his favorite person, a third grader from Cordova captured perfectly, if not thriftily, the public’s sentiment toward the pilot: He thrilled em/ Chill em/ Spilled em/ But no kill’em/ Gillam.  Not only did Harold Gillam pioneer commercial air service in the Wrangell Mountain region, but he was famous for his pet polar bears, his “cat-like” vision, and his uncanny ability to fly in weather, known to all pilots as “Gillam weather,” that kept most sane flyers grounded.

Pilot Bob Reeve represents the image of the “mysterious stranger,” who drifted into the coastal town of Valdez in spring 1932.  A sort of “scout of the sky,” Reeve rebuilt and used Owen Meal’s wrecked Eaglerock, and later, his own Fairchild aircrafts, to prospect for undeveloped mineral deposits throughout the Chugach and Wrangell Mountains, aptly naming his own claim, the Ruff & Tough Mine.  A self-proclaimed maverick of the Wrangell’s aviation scene, Reeve embraced a kind of frontier independence.  Reeve once stated that in the dog-eat-dog competition for Alaska aviation business, “Only the toughest—and the shrewdest—survive.” (2) 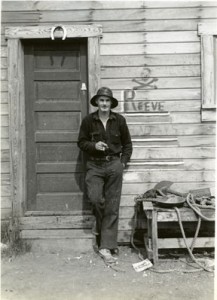 Taking advantage of the newly opened lode gold mines after 1933, the innovative pilot perfected a method of mudflat takes-offs and glacier landings that allowed service to the mines year-round.  Tourists arriving on the steamship often gawked curiously at his mudflat “airport” that fronted Valdez.   Writers, too, were intrigued by Reeve.  The Valdez Miner captivated readers with the 1935 serial, “Caught in the Wild,” in which fictional Skyboy Alan Grarth (who just happened to resemble the Valdez pilot) saved the lives of three pampered easterners while “they plotted to take his!”(3)  Reeve became the focus of other writers as well.  Rex Beach patterned his lead character, the “Flying Ptarmigan,” on Reeve in his 1939 novel, Valley of Thunder.  For his flying skills (and apparently his good looks), the soon-to be-famous war correspondent Ernie Pyle called Reeve the “Adonis of Alaskan Aviation.”  In 1937, Bradford Washburn sought a pilot to fly his climbing party and gear to the Walsh Glacier at the base of Mount Lucania in the St. Elias range, and at the time, the highest unclimbed peak in North America.  Reeve replied to Washburn’s request in typical Reeve fashion:  “Anywhere you’ll ride, I’ll fly.”  In doing so, Reeve broke the world’s record for the highest landing at 8,500 feet on skis. (4)

Merle “Mudhole” “Smitty” Smith was probably the most “grounded” of eastern Alaska’s early pilots.  Once established in the flying business, Smith filled the role of promoter, rather than cowboy.  Born in Kansas, Smith, like Buffalo Bill himself, mastered his profession as an entertainer, barnstorming throughout the Midwest with a group called the Flying Circus.  In the 1920s, barnstorming was a popular form of entertainment, in which pilots like Smith performed stunts and tricks with airplanes.  Barnstorming, however, was a tough way to make a living, so Smith came to Alaska in 1937 to work for Merritt “Kirk” Kirkpatrick, who had started Cordova Air Service (CAS) in 1934. 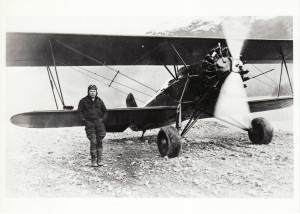 Smith spent several years as a working-stiff, flying supplies on scheduled flight to mines around the Copper Belt, during which time he received from Bob Reeve his very unglamorous nickname “Mudhole” after crashing his Stearman C2B biplane on the muddy airstrip at Bremner Mine.  After World War II, Smith became president and general manager of Cordova Air Service.  As head of the company, Smith was clearly aware of Alaska’s booming tourist industry, and like Buffalo Bill Cody, recognized that the territory’s exotic inhabitants and striking environments might be perceived as foreign to tourists.  In order to provide the visitor with a more familiar product, Smith, like old Wild West promoter, reinvented history.  Most visitors, if they knew anything about Alaska, understood it as America’s “Last Frontier.”

The concept of Alaska as the Last Frontier was not just familiar—it was universal, it was a centerpiece of America mythology.  Smith tapped into peoples’ nostalgic perceptions of the Wild West, basing his Alaskan tourism business on quirky miners, cowboy-pilots, and gold dreams, even though Kennecott, his most popular tourist destination, was built by Gilded-Aged industrialists and elite bankers whose modern milltown and railroad sought to remove copper rather than the more romanticized gold from the Wrangells.  Smith marketed his Last Frontier advertising campaigns to curious urbanites, who embraced the promise that Cordova fly-in trips would transport them to unique destinations, while at the same time, transport them back in time—an idea inspired not by his years in Alaska, but rather a visit to California’s primary tourist destination, Knots Berry Farm.

Still, although we like to think of Alaska’s bush pilots in the same vein as the American cowboy, it is important to remember to appreciate the ‘real’ flyers rather than those shrouded in romance and myth.   The flyers represented here—Gillam, Reeve, Kirkpatrick, and Smith—were highly competent pilots, who developed unique skills and knowledge of Alaska’s demanding environment in order to establish a vital and visionary profession.  These aviators brought eastern Alaska into the modern age, while at the same time, reinforced a resourceful, innovative, and even defiant frontier identity that continues to resonate with residents living in the shadow of the Wrangell Mountains today.

To learn more about these Alaska flyers, as well as many others, visit the Anchorage Museum’s current exhibit, Arctic Flight: A Century of Alaska Aviation.  The exhibit opened in February and will run through August.

2.  R.C. Reeve, “Statement Before the Civil Aeronautics Board, In the Matter of the Application of Reeve Airways, Valdez, Alaska, for a Certificate of Public Convenience and Necessity, Exceptions to Examiners Reports, Docket No. 340,”  August, 1939.