European Reactions to The Alaska Purchase 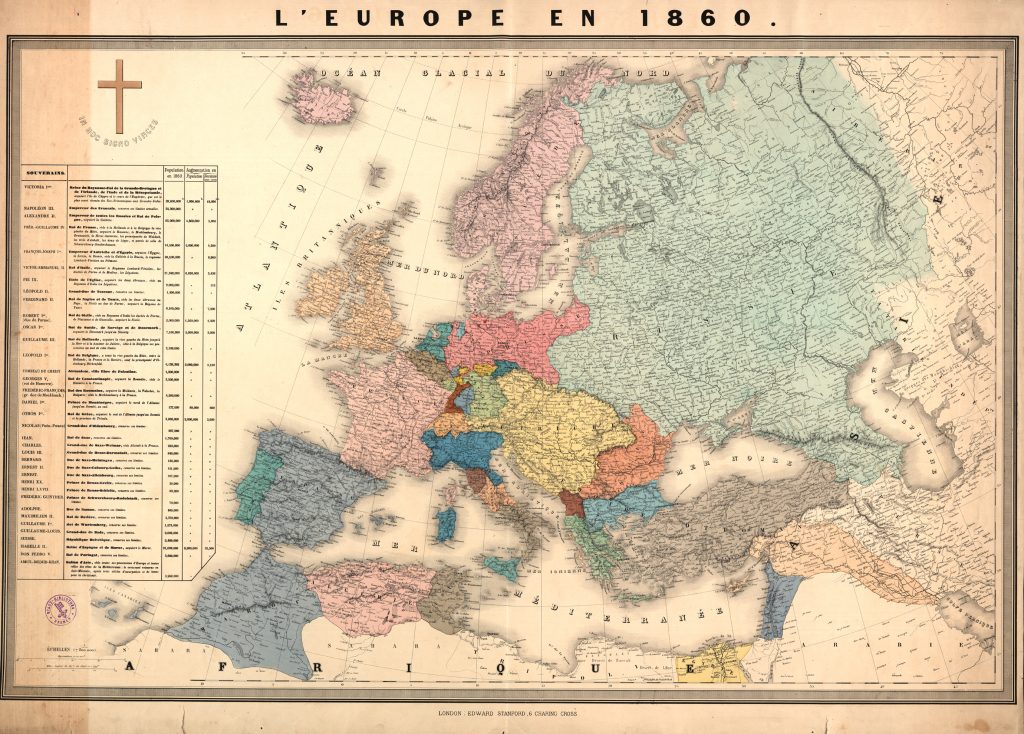 By Lee A. Farrow

In the early hours of March 30, 1867, Russian Minister Edouard de Stoeckl and U.S. Secretary of State William Seward signed the treaty that would ultimately transfer ownership of Russian America to the United States. Though many people know the basic outline of this story, few realize the international impact of the sale. Reactions to the Alaska Purchase were often strongest in Canada and Great Britain, for obvious reasons of territorial proximity, but there were also serious concerns in France, Prussia, and the Ottoman Empire. Many nations saw the purchase as an important step in the formation of a Russian-American alliance and feared what such a relationship might bring.

Europe in the 1860s was a rapidly changing landscape, fueled by nationalism in its various forms and the international rivalry that was usually a byproduct. In the midst of this international turmoil, the sudden announcement that Russian America had been ceded to the United States elicited a variety of reactions across Europe. Several U.S. officials serving in Europe remarked that the news had taken everyone completely by surprise. “It is, indeed, astonishing,” William Murphy, U.S. consul in Frankfurt on Main, wrote, “what deep and exciting impression the first short and abrupt telegraphic report of that unexpected change of territory produced amongst the different political circles of Europe.” There were rumors that the Alaska deal included America’s promise to back Russia up on its territorial ambitions in Europe and the Near East. The Austrian paper, the Neue Freie Presse, for example, speculated that the government of the United States had “obligated itself in an agreement for the cession of Russian America in support of the Russian government in the Orient and using the American Navy if necessary.” The cession of Russian America was consistent with Russia’s emergence from isolation, and had gained the growing nation two things: money for its treasury and an alliance.

Of all the continental European countries, France displayed the most concern at the announcement of the Alaska Purchase. While Napoleon was particularly concerned about Russian intentions in Europe, the French public was alarmed by the news of the purchase as well. The newspaper Le Temps observed that the American acquisition would have particular significance for British America, but also declared that, “the importance of the event that the telegraph has just informed us of is not limited to the New World.”

Prussia also reacted to the news of the Alaska Purchase with some concern. American Consul Murphy, wrote from Frankfort of the concerns of Prussian liberals that the United States was withdrawing from its assistance “in the promotion of republicanism in Europe.” The announcement of the Alaska Purchase was also used by some Prussians as a platform for the discussion of the Luxembourg crisis between Prussia and France.  Murphy relayed that the news had arrived at the very time when the Luxembourg question “had aroused and inflamed the minds of the Germans who declared unanimously opposed to the cession of any German territory to anybody and the least and last to France, the ‘archfiend to Germany’.” Members of the various North German parliaments passionately discussed the new American acquisition and pointed out that the transaction clearly illustrated the spirit of the Monroe Doctrine. America had persuaded Russia that “America ought to belong to Americans” and in return, Russia would have a free hand elsewhere. The Prussian government was urged to exercise the same principle in reverse, “by not allowing that an original and active piece of German soil, being moreover the native soil of some illustrious German Emperors, should be separated from Germany.”

Interestingly, Bismarck himself was not alarmed by the announcement. George Bancroft, who became American minister to Prussia recorded a conversation he had with Bismarck in August 1867. Bancroft reported that the chancellor spoke favorably of the acquisition of Russian America by the United States.  “Russia could not turn it to any account,” Bismarck told Bancroft, “The enterprising men of the United States would do so.”

Politicians in Constantinople also were alarmed by the news of the Alaska Purchase, fearing that a Russian-American alliance would involve the United States taking Russia’s side in the Eastern Question. The official Ottoman publication, La Turquie, compared the announcement to a bomb bursting “in the midst of very complicated situations charged with tempests” and called the anticipated Russian-American alliance a “common danger” for all of Europe specifically, with American blessing, Russia could seize Constantinople and “give a mortal blow to English domination in India.”

In the spring of 1867, then, there were many serious matters brewing in Europe and the various nations were all engaged in managing both domestic and international threats. Officials and citizens in European nations took note of the American purchase of Alaska and, for the most part, received the news with alarm. European reactions to the Alaska Purchase reveal a growing awareness of the strength of both the United States and Russia. Many in Europe worried about the potential of a real Russian-American alliance and what this new arrangement would mean for the Near East and Russian influence in the dismantling of the Ottoman Empire. Others predicted that the purchase would determine the fate of British North America, which would be cut off from the Pacific Ocean and have as its north-west neighbor a thriving republic instead of a monarchy (British North America still had Pacific Access, just south of 54 40). On this point, even Karl Marx had something to say about the Alaska Purchase declaring, “from the economic side, this acquisition for the present is not worth a cent, but … the Yankees will cut England off from the sea from one side and hasten the annexation of all British North America to the United States. That’s where the dog is buried.”

Bolkhovitinov, N. N. Russian-American Relations and the Sale of Alaska, 1834-1867. Ontario: Limestone Press; Distributed by the University of Alaska Press, 1996.

Lee A. Farrow is distinguished teaching professor in the Department of History at Auburn University at Montgomery, director of Auburn’s Center for Excellence in Learning and Teaching, and author of Seward’s Folly: A New Look at the Alaska Purchase (2016).