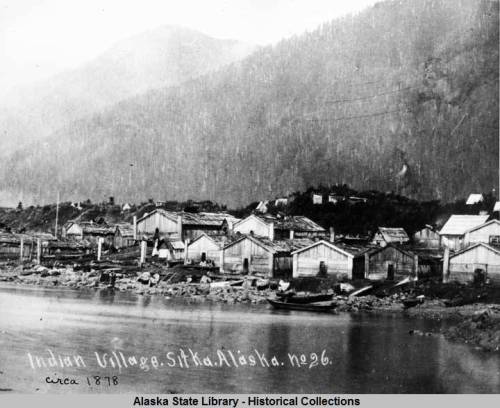 American soldiers arrived in Sitka in October of 1867 to take possession of Russia’s claims in North America. The Army pulled out a decade later, leaving Alaska first to the U.S. Treasury Department, and then to the U.S. Navy. Alaska finally got a civil government in 1884, after 17 years of American occupation.

That first decade saw the complete transformation of Sitka from Russian colony with an adjacent Tlingit village to American town. What is the legacy of that decade in Southeast Alaska, today? 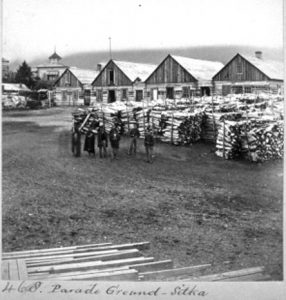 This is approximately where the Pioneer Home is, now. The blockhouse on the left edge is in about the same location as the replica today. Taken in 1868 by Eadweard Muybridge, from the Online Archives of California from the Bancroft Library, University of California Berkeley.

When I read documents from this period, the first surprise to me was that there was not a separate Native and non-Native economy. Americans here in 1867 bought furs and food from Tlingit people and hired Tlingit people for labor, and did not remark on it being at all unusual.

The main industry in the region was the fur trade, which began in the mid-1780s with Europeans and Americans buying sea otter furs from coastal peoples. The Russians came to southeastern Alaska in the 1790s, after hunting out the sea otter farther west, with fleets of forced-labor hunters from western Alaska. The sea otter were soon hunted out here, as well, and the trade continued in other, less valuable furs.

The Russian American Company was a fur trading business, chartered by the Russian government to rule Russia’s North American colonies. They were always short of manpower and resources, and they had to work with the Indigenous Tlingit people in order to stay in southeastern Alaska.

Most of the profits in the fur trade went to traders, who were clan leaders, especially those who owned rights to trade with Interior groups at Chilkat in the north, and up the Stikine River at what is now Wrangell. These clans became wealthy and powerful and their leaders well known.

International trade also brought diseases including smallpox, that decimated Indigenous populations, who didn’t have access to inoculation, here as elsewhere in the Americas.

In the 1850s, settlers, entrepreneurs, and miners poured into the Pacific Northwest, to what are now British Columbia and Washington State, which became the economic hub of the region. After 1851, Tlingit traders took their furs to Victoria, Canada to trade. Thousands of Native people, including Tlingit people, traveled to Puget Sound to participate in trade with colonists and with other Indigenous groups, and to work at farms, sawmills, and mines. 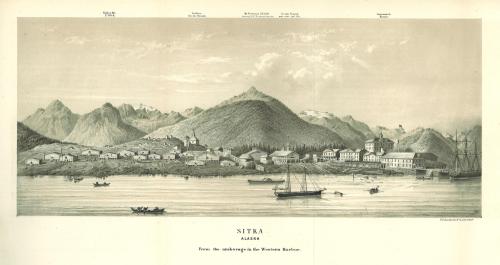 Sitka showing the Village and the stockade. This was in the first Coast Pilot, published in 1869, from a drawing made in 1867 aboard the USS Lincoln. Images courtesy of the NOAA Central Library and John Cloud.

Indigenous residents of British Columbia and Washington were being systematically dispossessed. The British Navy enforced “gunboat diplomacy” in coastal British Columbia, and in Washington the military forced all Native people onto reservations within a decade. Authorities responded to Native violence, usually a response to settler or military violence, with disproportionate force, the pattern throughout the Indian Wars.

In southeastern Alaska, the situation was different: in 1855, New Archangel was attacked, and several Russians were killed. Instead of retaliating against the Tlingit, as the British Navy or U.S. Army would probably have done, company officials blamed the Russian governor for allowing relations to deteriorate, and worked to make peace with the Tlingit leaders.

The Russian American Company regularly paid Native people compensation for deaths and injuries, even when accidental. They were complying with the Tlingit system of justice, which entails compensation rather than punishment.

In 1856, the USS Mississippi fired on a group of Tlingit people at Port Gamble in Washington. One of those killed was a Tlingit clan leader from Kake, a village in southeastern Alaska. When his relatives did not receive compensation for the death, they went to Puget Sound the following year and killed the Collector of Customs on Whidbey Island, as a person with comparable status. They then returned to Russian America.

Another indication of the relative position of Tlingit clans in southeastern Alaska was in keeping the Hudson’s Bay Company (HBC) from expanding into Tlingit lands. Tlingit clans pushed the HBC to abandon trading posts up the Stikine River in 1838, at Taku in 1842, at Wrangell (leased from the Russians) in 1843, and on the Yukon above Chilkat in 1852.

Tlingit control of southeastern Alaska ended with the transfer in 1867. American traders took over the southeastern Alaska trade, and miners, backed by the military, broke the monopolies at Stikine then at Chilkat.  In addition, the fur trade was in a slump from overhunting and because of a depression in Europe and the United States.

Politically, the change was dramatic. American authorities considered Native people “savages” and inferior, and did not allow them to be citizens. The military endeavored to put down “insolence” and to teach them to be “peaceful” and subordinate. American authorities refused to recognize Tlingit justice, even when complying would have been expedient and would have saved American lives.

In early 1869, the Army at Sitka refused to compensate relatives for accidental deaths of two men from Kake. The relatives then killed two whites. The USS Saginaw then shelled and burned all but one of the 29 clan houses of the Kake villages. A similar incident happened at Wrangell when the Army would not compensate for the death of a Tlingit man and a relative killed a white trader; the Army then shelled the village of Kaachx an.áak’w. 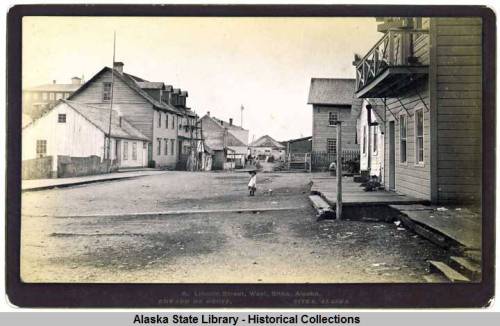 Sitka by Edward DeGroff, looking toward the wharf. “Baranof’s Castle” is on the left.

The consequences of being forced to the fringes of political power and the economy was attributed to Native incompetence, and used to justify continued discriminatory treatment.

In 1877, when the Army left Sitka, Tlingit residents began taking down the stockade. Tlingit people even forced a local merchant to pay compensation for a death. In 1879, a Tlingit clan leader demanded compensation, and wages owed, for the accidental deaths of clan relatives working on a whaler. The company wouldn’t pay, and he threatened to kill five white merchants. At that point, some white residents called for protection, and after a British warship was the first to reach Sitka, the U.S. sent the U.S. Navy to rule. (Even at the time, the incident was written up as an attempt to get more military spending in Sitka, not driven by any actual threat.)

By the end of the 1870s, the economy of southeastern Alaska was picking up: the first canneries were built in 1878, and the first commercial cruise to Glacier Bay came in 1882. A gold strike in 1880 at what is now Juneau brought several thousand non-Native people to Alaska. These new industries, however, only included Native people as laborers and producers, and took Native land and resources without compensation.

In 1882, the USRC Corwin destroyed most of the village of Angoon, resulting from a request for compensation for accidental deaths. This time the action was condemned; by 1882, there was no longer a general perception of a need to subdue Native people with force.

The first, inchoate decade of American rule shaped Alaska today. By the time of 1884 Organic Act, patterns were set, of federal policy and land ownership, industry, and local government, that continue to the present day. Part of the legacy is the cumulative impact of Native people being considered savages, undeserving of citizenship or equal status in law.

The second surprise for me, in reading the words of Americans in 1867, is how much of the early stereotype survives today. Even today, patterns, of social status and health are taken as evidence of inherent difference, instead of as the results of 150 years of unequal treatment. Perhaps the major legacy of this period is a stereotype.

The history of this decade, with the regional and historical context, should be common knowledge. Without it, racial bias will continue. Native people know what their parents and grandparents experienced; when society at large recognizes and acknowledges a complete picture of our history, we can use it to address the challenges we face today.

Rebecca Poulson is an artists, writer, teacher, and historian. She serves on the Alaska Historical Commission, on the board of the Alaska Historical Society and Sitka Maritime Heritage Society. She is currently working on a book about the history of Sheldon Jackson College in Sitka, Alaska.

Before 1867 and regional context:

Katherine L. Arndt and Richard A. Pierce, A Construction History of Sitka, Alaska, as Documented in the Records of the Russian-American Company, 2nd Edition (Sitka, Alaska: Sitka National Historical Park, National Park Service under Cooperative Agreement with the Department of Anthropology, University of Alaska Fairbanks, 2003).

Frank Mahoney, “Letter from Frank Mahoney on the Indians and their trade in Eastern Alaska,” Appendix F in Vincent Colyer, Bombardment of Wrangel, Alaska, Report of the Secretary of War, Secretary of the Interior, and Letter to the President (Washington, D.C.: Government Printing Office, 1870).

Vincent Colyer, Report of the Commissioner of Indian Affairs, Made to the Secretary of the Interior, for the Year 1869, 586-587.

Aurel Krause, The Tlingit Indians, Results of a Trip to the Northwest Coast of America and the Bering Straits, trans. Erna Gunther (Seattle: University of Washington Press, 1956), 230.

In re Petition of Can-Ah-Couqua, 29 F 687 (1887), The Federal Reporter: Cases Argued and Determined in the Circuit and District Courts of the United States, Volumes 29-30, accessed at books.google.com.